Challenging the so-called "health" challenge: Our obsession with the "before" and "after" body transformation

The photos are always side-by-side comparisons: one person who has decided to turn herself into someone new 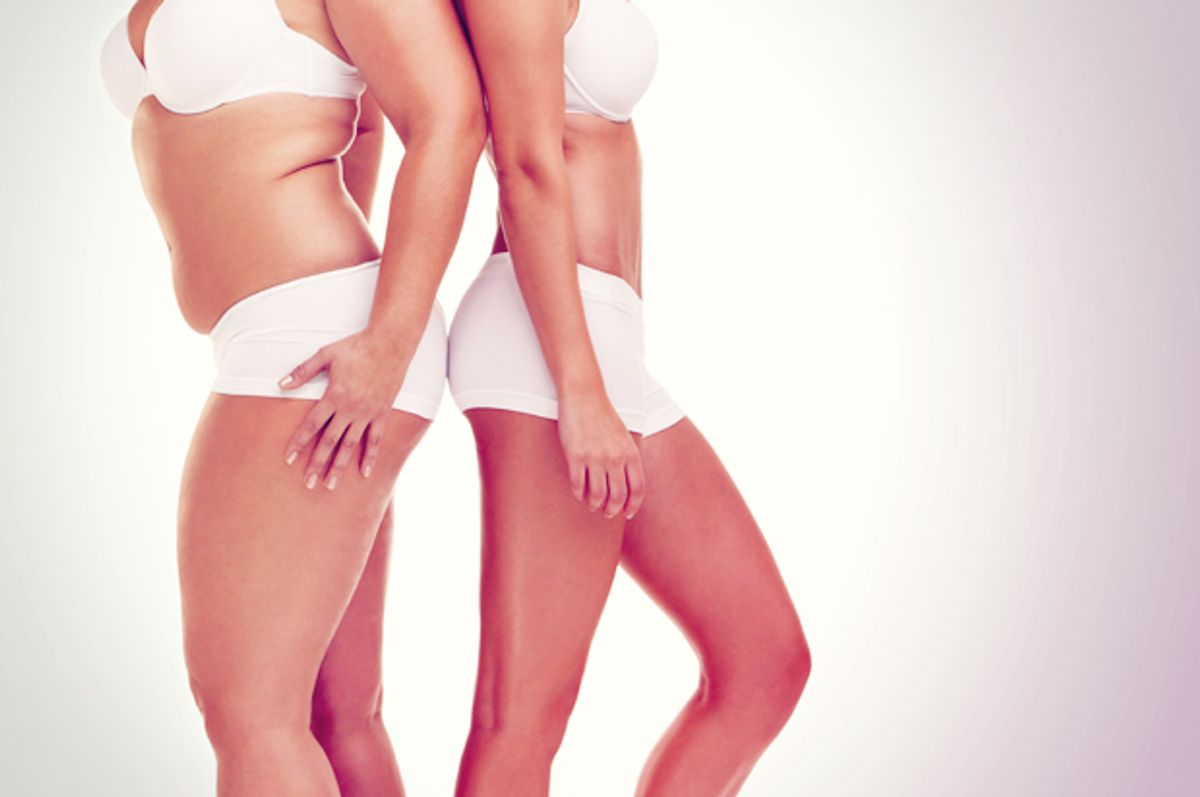 The Glamour Health Challenge in Amsterdam is a pain. The video is two years old and probably most of the 357,000 YouTube viewers watched to get a free workout with Australian trainer and Instagram sensation Kayla Itsines. That’s what I was after. To get the Itsines experience, I sweated along with a filmed event, hurrying through squats, running my legs in mountain climbers until I thought I’d puke on my yoga mat. Itsines is captivatingly fit — flat-stomached, thigh-gapped, lithely muscular — and that’s her appeal, why YouTube users like me must’ve endured the Glamour Health Challenge, why that field in Amsterdam was aswarm with women all ogling Kayla. Every shot of Itsines’ body reinforced her program. While she stalked the stage in eggshell-white trainers, consulting her stopwatch and assigning course after course of burpees to her Spandex tribe, I realized how much repetition is the point. Any workout regimen demands repetition — not by engaging the same muscle groups, necessarily, but by repeating and remembering a goal.

Itsines, the creator of "Bikini Body Guide," a clean eating and “lifestyle” program some 10 million women have used to become “healthier, fitter, and more confident,” is one half of The Bikini Body Training Company (the other half is her fiancé, bodybuilder Tobi Pearce), a venture that has skyrocketed her worth to a staggering $46 million. She may be the youngest person on the BRW Young Rich list in 2016, but to her followers she’s an angel and a salesperson, the skeleton key to achieving their goals. For Itsines’ cult, one of those goals takes the form of the Bikini Body. The more Bikini Bodies her users see, the better.

To participate in this program, you can purchase Itsines’ ebooks or subscribe to her app, Sweat with Kayla. If you’re trying to do BBG on the cheap, you can check out that Glamour video or scroll through Itsines’ Instagram and try to will yourself into weight loss. There, you’ll find envy-inducing pics of every shade: creamy chia seed pudding cupped in hollow ruby pomegranates, beach porn with Kool-Aid blue water, smoothies the lilac of antique French boudoir upholstery. There are motivational quotes and lots of shots of Kayla: mid-workout, her famous six-pack up-close; in the studio; in a mirror, modeling new gear (she may single-handedly bring down yoga pants, such is her commitment to short-shorts). But as useful as Itsines’ tips are for keeping white trainers sparkling, you know her 6.6 million followers are scrolling for those Before and Afters.

The photos are always side-by-side comparisons: one person who has decided to turn herself into someone new. As if to remind followers that this isn’t all about losing weight, there’s a Before and After where the Before weight listed is lower than the After. But mostly, the women — Kayla only trains women — wear bikinis or shorts-and-sports-bra combos or underwear, and they only look smaller. One woman shows her backside — from below her knees to her neck — in a black lace thong: she’s nearing 50, and with the help of BBG, most of her cellulite is abolished. They stand in locker rooms and bedrooms. You can see, in the background, the posters on their walls and the lumps in their bedspreads. They are teenagers and 20-somethings and mothers of two or three or four. Sometimes they label their photos: “Pre-BBG, 40 weeks.” “46, no workout; 48, bbg wk. 21.” “Jan. 16, March 17.” #progressbyKayla.

That’s the goal, after all — to chronicle progress and therefore witness change.

Itsines discourages her “girls” (this language is common among BBG-ers, too, I’ve noticed) not to weigh themselves. After all, her program — a blend of HIIT and cardio — often leads to muscle growth. It can be discouraging to watch that number change, yet documenting one’s wellness journey with photographic evidence keeps one on track.

But on track for what? Though programs like Itsines’ promise rewards beyond the physical (on her blog recently, see the March post: “Confidence Is At an All Time High for These Ladies! #BBGResults”), the rhetoric of Transformation Photos leaves all the emotional and psychological benefits of weight loss out. As Mia Findlay, an Australia-based advocate for people with eating disorders, says of Itsines’ program, and others like it: "Bikini Body Bullshit."

I signed up for a free trial with Itsines and received an email that would allow me to download seven days' worth of exercises. Below the link to the free exercises were more transformation photos, each captioned with a story: “@ashtonmwaller constantly struggled to lose weight, she would try extreme diets and count calories only to fail and cheat. She became inspired by my transformations and finally decided to take action, it was hard at first but after seeing results she became driven to lose the rest of her weight.” This woman, like the others profiled on Itsines’ social media channels, has purportedly been “motivated to change [her body], health and confidence,” but where is evidence of the altered health and confidence? Transformation photos, tellingly, leave out those aspects of wellness.

It’s a tantalizing promise, one akin to immortality. If I can change this, I can change that, and bypass the lumpy yucky bits of existence. The obsession with body modification seems alive and well the longer you wander the halls of the internet. “Weight loss before and after” yields 71,200,000 results on Google. Lest one think Itsines’ images appeal exclusively to women, there is evidence that men aren’t immune to transformation narratives, either: consider Men’s Health’s “9 Jaw-Dropping Weight-Loss Transformations You Have to See to Believe.”

But still, I worry. The continued barrage of transformation images — whether they’re on Itsines’ Instagram or the cover of People magazine’s “Half Their Size” issue — ignores the ugly truth about diets (that you can’t lose and keep off weight on them). Sure, Itsines’ program isn’t strictly about what to eat or not eat, but her hashtagging-community of BBG-ers keep the collective eye trained on the prize.

I’m not claiming there’s anything novel about Kayla Itsines beyond her stratospheric wealth and marketing savvy. She's is the most visible preacher of this dogma of self-betterment right now, but is there anything so novel about her group wellness program? Is this just the latest iteration of Weight Watchers or Jenny Craig, where meetings involved weigh-ins and conversations and education? I don’t think so.

But maybe the medium changes the message. In fact, I think there’s something dangerous and maybe more narcissistic about keeping a schedule of self-portraiture, of charting and celebrating the shrinking of the self, regardless of how much more those biceps pop. The world of transformation documentation is both impossibly vast and endlessly narrow. There’s no more apt representation than a widely shared photo of Itsines: it’s a close-up of her abs, rippled with tight, toned muscle, her head and neck lifted, her gaze pinned to her concave navel.