Donald Trump must be getting desperate: Does he really think thuggish Corey Lewandowski can save him? 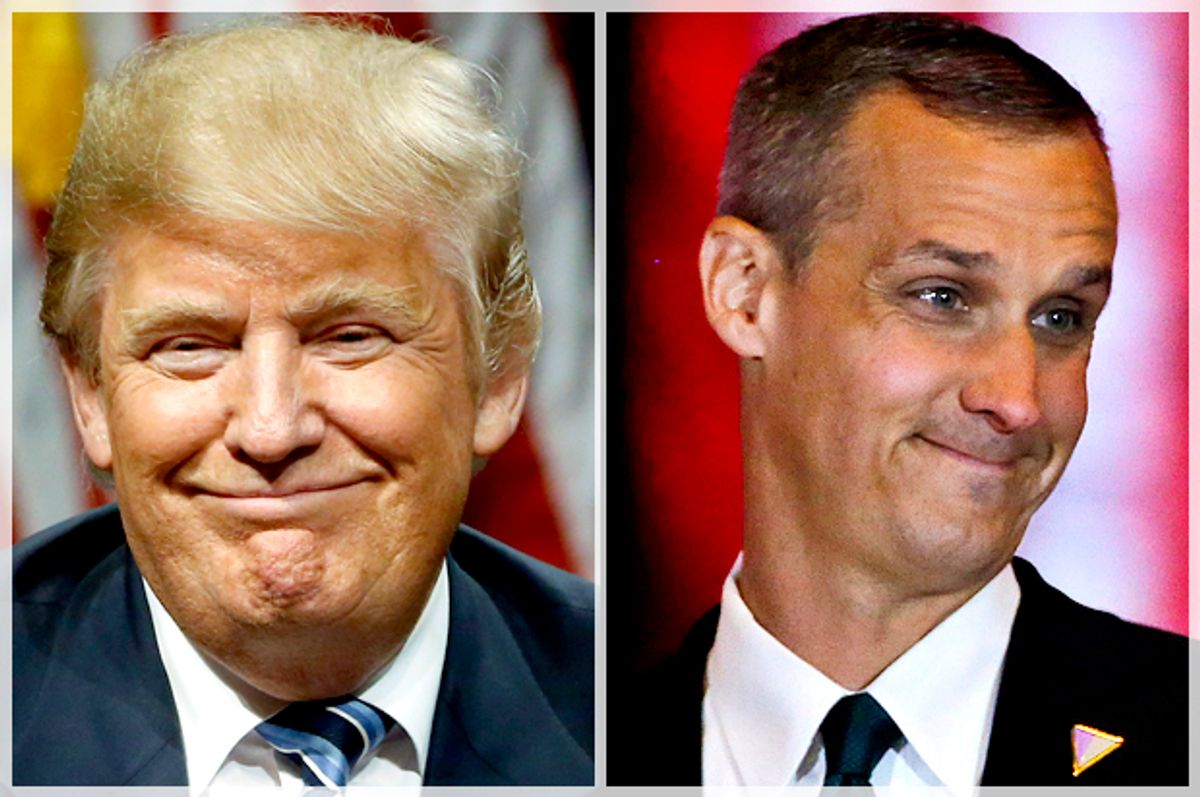 President Donald Trump's excellent overseas adventure continued on Tuesday, with the leader of the free world leaving a high school yearbook-style note at Israel's Holocaust memorial, Yad Vashem, complete with adorable exclamation point using a circle instead of a period. (He would have used a heart but he was trying to be dignified.) But the day's big news happened back in Washington.

Former CIA chief John Brennan testified before Congress and further confirmed that the entire intelligence community's hair had been on fire since last summer over the Russian connection. The director of national intelligence, Dan Coats, also testified and refused to deny reports that the president had called him up and asked him to declare Trump's innocence. Most observers think that if it didn't happen, Coats would have felt free to say so.

And the administration finally released its budget, which immediately blew up like the Hindenburg (as I predicted). Even conservatives were a little shocked at the sheer scope of the barbarity and callousness. Its architect, budget director Mick Mulvaney, seemed to be struggling to repress maniacal laughter, but that's about all we heard from anyone in the administration. Naturally, House Speaker Paul Ryan said it was "right on target," further cementing his growing reputation as the world's greatest suck-up.

The biggest news is that somebody finally convinced Trump that he is in need of outside legal counsel, aside from former New York Mayor Rudy Giuliani and Judge Jeanine Pirro. One might have thought it would be wise to select someone with Washington experience who understands both the legal and political aspects of presidential scandals, but that's not how Trump works. According to Politico, he has hired his own longtime lawyer, Marc Kasowitz, rather than someone who might not understand that Trump only wants to hear what he wants to hear. (An added bonus is that Kasowitz also represents Russia's largest bank, so he knows the terrain.)

The administration seems to understand that it should create a "war room" in order to concentrate the scandal management in one place instead of sucking in everyone in the White House at each new turn. But if people in the GOP hierarchy thought Trump might be getting serious about hiring some professionals to handle that, they should probably think again. Apparently Trump plans to house this operation outside the White House and, according to Politico, he wants to bring back his original campaign manager Corey Lewandowski, along with his deputy campaign manager, David Bossie, to run it.

It's not unusual when an administration finds itself becoming engulfed in controversy to bring in someone to help put out the flames. Usually that person is someone with management experience and a sterling reputation, an individual who is respected by both sides of the aisle and beloved by the mainstream media. The point is to show that the White House is serious about fixing the problem, even if it hasn't got a clue about how to do that. Think of David Gergen being called into President Bill Clinton's administration in its early days or former Sen. Howard Baker during the waning days of the Reagan administration, as these presidents confronted consuming scandals. Lewandowski and Bossie are not in the same category.

According to CNN, despite the fact that even Jared Kushner and Ivanka Trump don't like him, Lewandowski still has the president's trust. He's a thuggish sort best remembered for roughing up protesters and assaulting reporters, so that makes sense. Lewandowski was finally let go after losing a power struggle with the short-lived second campaign manager Paul Manafort, who is now very much in the doghouse over his obvious ties to Russia. Trump probably remembers those early days of the campaign as his glory days, and thinks Lewandowski has a special talent that can help him weather the storms. But Lewandowski is a D.C. novice who couldn't even get his attempt to cash in as a lobbyist off the ground. It's unlikely that he has the skills required to deal with something as serious as this Russia investigation.

Bossie, on the other hand, is a longtime GOP insider who has a couple of decades of experience in working more or less behind the scenes both for his own dirt-digging opposition research organization Citizens United (yes, that Citizens United) as a congressional investigator and a producer of conservative propaganda films.

How that experience translates into crisis management for Trump remains a little obscure. Bossie is obviously savvy about how to pump up a scandal so perhaps the idea is that he will know how to take the air out of one as well, but in this case that's a tall order. More likely he's going to be tasked with distraction and deflection.

Bossie built his reputation and his career as a professional character assassin of the Clintons and he's done well at it. He was undoubtedly very useful to Trump in helping him identify various buttons to push. One can see the echoes of his work (and, for all we know, its direct application) in the latest phony Clinton conspiracy, the ongoing Seth Rich saga, which has the right-wing media in a full-blown frenzy. Although Fox News has now retracted its original story on Rich's murder, both former House Speaker Newt Gingrich and Fox News' Sean Hannity are still hysterically flogging this outrageous conspiracy theory. It has all the hallmarks of a Bossie-style hit although the inane Pizzagate conspiracy spread by the likes of former national security adviser Michael Flynn proves that dirty tricks can be done just as well by amateurs.

Hannity has said he believes the Rich story exonerates Trump because it suggests that it wasn't the Russians who hacked the Democratic National Committee. (The fact that the Democrats' congressional campaign and Hillary Clinton's campaign chair John Podesta were also hacked is just left dangling out there.) So one can see the outlines of a desperate attempt to prove Trump's innocence. Smearing Hillary Clinton seems like something Trump  would define as "crisis management" — he always goes on offense when he's under pressure.

It's predictable enough that the hard-core Republican base would swallow this, hook, line and sinker. It always has done so before. But this type of thing won't help convince members of the wider public any any more than it did during the first go-round with the Clintons in the 1990s. And back then Republicans largely had the mainstream media on their side, eager for any juicy morsel of gossip about the Clintons. If Hillary Clinton were president, there can be no doubt the media would be right there begging for whatever Bossie and his ilk could feed them. But Trump is in the White House and there is no faux Clinton scandal on Earth that can beat the lunacy that comes out of the White House and this president's mouth every single day.

Trump's overlapping scandals are as far-reaching and outrageous as the Republicans always tried to portray the Clinton scandals to be. Bossie's tawdry character assassinations are revealed for the cheap stunts they are in comparison with the real thing.