After Trump's disastrous vacation, Angela Merkel warns: The world has no leader

If the president's trip to Saudi Arabia and Israel was farcical, his European stop left the world order shaken 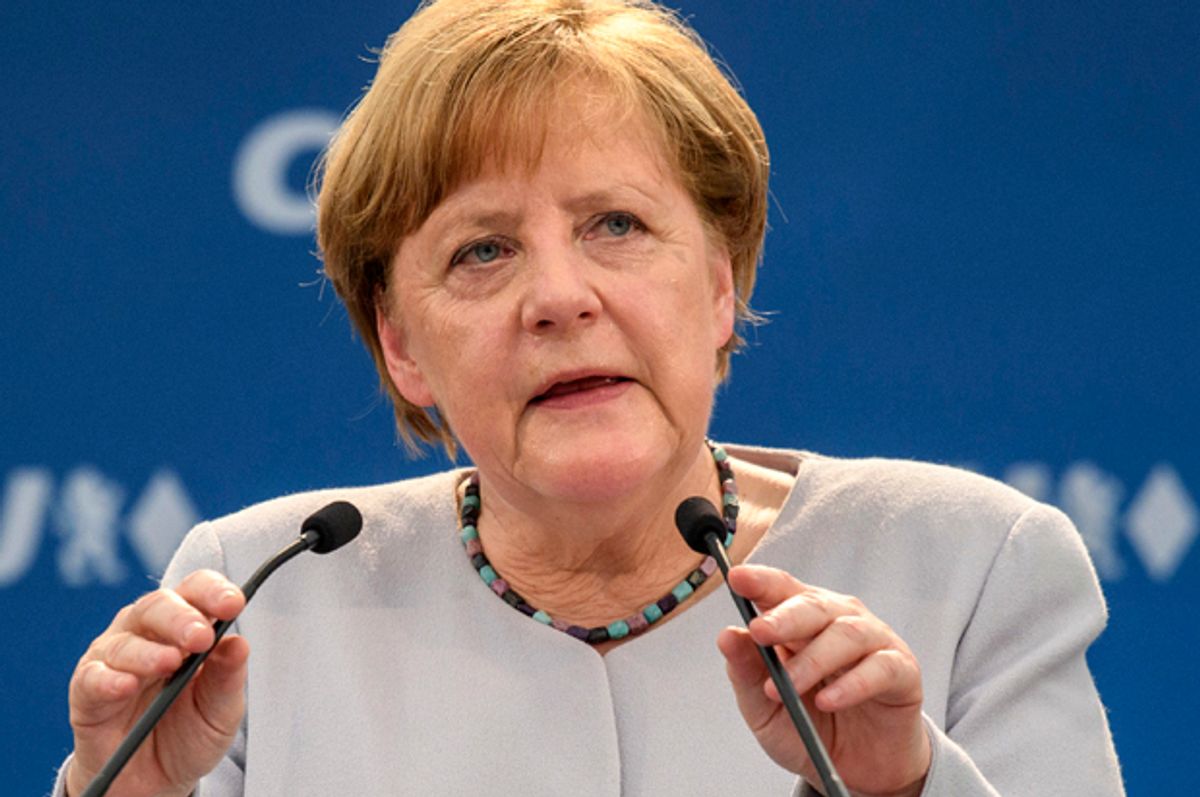 On the morning after the presidential election, still reeling from the shock and struggling to wrap my mind around what had happened, I wrote this in my column for Salon:

We wake up today to a fundamentally different world than the one in which we woke up yesterday. The nation our allies looked to as the guarantor of global security will now be led by a pathologically dishonest, unqualified, inexperienced, temperamental, ignorant flimflam man. Things will never be the same. And we have no idea at the moment exactly what form this change is going to take, which makes this all very, very frightening.

It seemed a little bit hyperbolic even in that moment, but I'd been saying privately to friends for months before the election that a Donald Trump victory would automatically signal that the post-war security umbrella that had kept the world from another global conflagration had just been turned inside out. The world's only superpower, after electing this sort of unqualified buffoon, could no longer be trusted.

I suppose that most of us, worried as we were, hoped that once Trump got into office he would sober up and settle down, hire some qualified people who would help him understand the job and reassure the world that the United States hadn't turned the nuclear codes over to an imbecile. But it was always an open question. After all, it was only 16 years before, following yet another election in which an incurious lightweight had ascended to the presidency by a dubious process, that the world saw the U.S. invade a country that had not attacked us.

But that was after 9/11 and despite most of the world's disapprobation, there was still perhaps some distant hope that America would be able to do as it promised and usher in a new, more peaceful stability in the region. Obviously that did not happen.

With that background, the rest of the world greeted the 2008 election of Barack Obama with relief. Here was a dignified, intelligent leader who garnered respect and esteem all over the world. The election of the first African-American president seemed to indicate that Americans were casting off the retrograde politics of the previous administration. Obama won the Nobel Peace Prize mostly for reassuring the world that the U.S. had not gone crazy after all.

Then we did it again. Marx's famous quote to the effect that history repeats itself, "the first time as tragedy, the second time as farce," has never seemed more apt. Unfortunately when the farce is taking place in the world's most powerful nation, it's just as dangerous.

Trump's first foreign trip to Saudi Arabia, Israel, Rome, Brussels and Sicily was one for the books. In Saudi Arabia he bragged about getting the wealthy royal family a "good deal" from American arms manufacturers and never even mentioned human rights. In Israel he bizarrely confirmed that he'd given the Russian ambassador Israeli intelligence secrets without permission and left a yearbook mash note at Yad Vashem, the Holocaust memorial.

But when the president got to Europe, it really went south. His visit with the pope was weird enough to inspire Twitter wags to photoshop some memorable pictures:

When he got to Brussels for the NATO meeting, Trump's true agenda came through. He practically yanked the arm off of newly elected French President Emmanuel Macron, in a truly bizarre show of physical force. He shoved aside the prime minister of Montenegro and then shoved out his chest like Mussolini on the balcony. All this strange behavior was noticed by Europe's leaders. But it was his speech in Brussels and his unwillingness to confirm Article 5, the fundamental commitment to the NATO alliance, that has shaken the world.

Standing before the new monument to 9/11, Trump patted himself on the back for not mentioning the cost of the new headquarters and then rudely admonished the members to their faces for failing to pay up. He linked terrorism and immigration in ways that only the most nationalistic right-wing regimes normally do, daring the European leaders to defy him. It was an astonishingly graceless moment.

Throughout the meeting, Trump signaled that he was likely to withdraw the U.S. from the Paris climate accords, but gave no good reasons for doing it. His apparent affinity for Russia was undiminished, but it was his display of overwhelming ignorance that left his supposed allies shaken.

The Belgian newspaper Le Soir reported that Trump told that nation's prime minister, Charles Michel, that his view of the European Union was largely based on how long it took him to get permits for his golf courses.

In other words he had done no homework on the EU and believed, as usual, that his limited personal experience had taught him all he needed to know. Then he idiotically told EU leaders that the Germans were "very bad" on trade, threatening to put restrictions on imports of German cars -- apparently unaware that German car manufacturers have plants all over the U.S. Neither he nor his team seemed to understand European trade policy at all, suggesting over and over that America had specific trade deals with various countries when the EU trades as a bloc.

On Sunday German Chancellor Angela Merkel gave a speech that may signal just how important this trip was. She said:

The times in which we could rely fully on others — they are somewhat over. This is what I experienced in the last few days. We have to know that we must fight for our future on our own, for our destiny as Europeans.

The New York Times reported her comments as "a potentially seismic shift in trans-Atlantic relations."

All that might be fine if it weren't for the fact that this is happening largely because of the election of a man so crude and unsophisticated that the alliances that have kept the world intact in the nuclear age are coming apart at the seams, with no rational plan or goal to replace them. And getting rid of Trump, on its own, won't be enough to fix this. His election has resulted in a loss of trust that's going to be almost impossible to get back. Many countries in this world depend upon the American security umbrella and a predictable American foreign policy, even if they aren't particularly happy about it. They're going to look for other arrangements now. Asian countries will look to China. Europeans will look to Germany or Russia. Others will stick with the U.S. New spheres of influence will emerge.

Maybe all this will work out in the fullness of time. But blowing things up without a demolition plan creates strange incentives and invites risk and instability. It leads some people to make mistakes in judgment. If this first foreign trip is any indication, the most likely candidate to make such a catastrophic error is the president of the United States.