Superhero films are bad for democracy 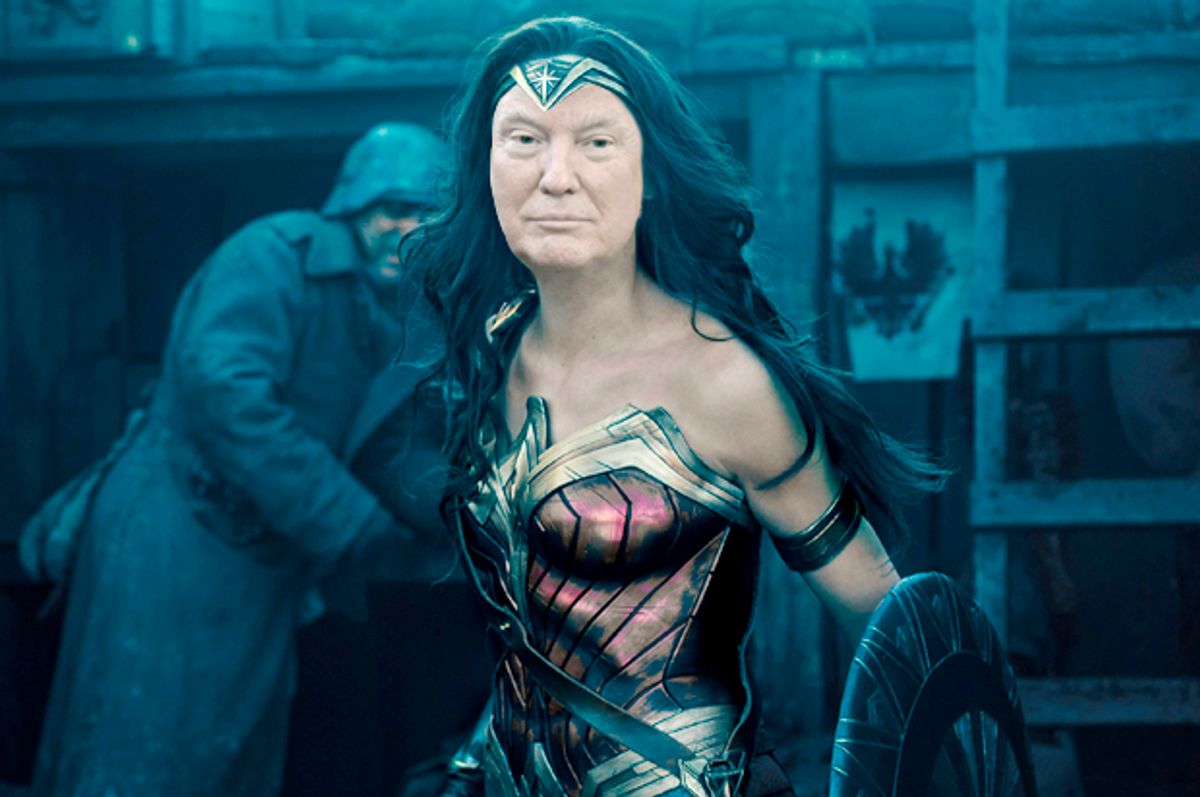 Here’s a joke you haven’t heard: What’s the difference between Wonder Woman and Donald Trump?

One is an moralistic aristocrat with a superiority complex about Western civilization who autocratically thrusts their warped notion of “justice” upon the world. The other, of course, is the president.

Lest you think I’m singling out the hero du jour, I should note that virtually any superhero can be inserted into that joke. Batman, Superman, Wonder Woman, Thor, Iron Man — with few exceptions, superhero blockbusters read as if they were underwritten by the American Enterprise Institute. That’s because nearly all superhero movies glorify wealth (and the freedom it provides), aristocracy and/or monarchy, militarism, unilateralism, and right-wing fantasies about criminality.

You might object to this harsh critique of America’s most beloved (and profitable) film genre. After all, aren’t these movies little more than harmless summer popcorn flicks?

Superhero films are far more than mere moving pictures. They are billion-dollar spectacles and marketing bonanzas, with endless spin-offs, product tie-ins, video games and toy lines. Many impressionable children come to identify with the archetype of the ultra-unique, mercenary hero, unilaterally deciding what is right and wrong. Just as worryingly, some children and adults are only exposed to global politics by what happens within the confines of action films.

The newly released “Wonder Woman” is an excellent example of the worst kind of superhero politics, the kind that cut across franchises and movie studios. As an origin story, the film begins in a common superhero setting: the demigod’s alternate-universe home — the land of the Amazons in this case — where Wonder Woman and her family live in an edenic paradise that also happens to be a monarchy.

The recent Thor and Superman films begin in much the same way. It is telling that these otherwordly paradises that superheroes often fall from have medieval politics. Wouldn't it be nice to see a superhero come from a planet of primitive communists, or anarcho-syndicalists?

That's unlikely to happen, of course. Superheroes are almost universally defined by their status (that’s what makes them super!). Hence, they tend to come from worlds that glorify individualism and hierarchical forms of government where elitism, not equality, reign. While Wonder Woman is almost unique in that her homeland is not a patriarchy, it is still a monarchy. Less than egalitarian, Themyscira sees plenty of squabbling between Amazonians of different ranks.

For a genre that is obsessed with superficial notions of “good” and “evil,” the distinction is often difficult to discern in many of its films. Early on in “Wonder Woman,” our hero rescues an American spy who is being pursued by a group of trigger-happy German soldiers. Yet, because the American spy was the one in distress, and the one whom Wonder Woman laid eyes on first, she comes to see the Allies’ side as “good” and the Germans as “evil.” Lucky that it didn’t happen the other way around or we'd have Wonder Wonder backing up the Central Powers. As it is, Wonder Woman’s belief in the righteousness of wantonly slaughtering Germans rests entirely on random chance.

As much as superheroes feel entitled to decide who’s good and who’s evil, they also give themselves license to decide who is a criminal and who isn’t. Yet no one individual can dole out justice. Justice is a collective principle. Hence, functioning democracies create complex systems of courts and jurors to ensure fair trials. For superheroes to serve as juries, judges and executioners makes them authoritarians acting outside the law by definition.

And besides, criminality is not something absolute or moral. It’s generally born of circumstance, a byproduct of inequality or perhaps a failed social welfare state.

Furthermore, the law itself — something superheroes like to uphold as righteous — is not inherently egalitarian. Anatole France perhaps put it best: “In its majestic equality, the law forbids rich and poor alike to sleep under bridges, beg in the streets and steal loaves of bread.” When Batman busts a thief, is he working for absolute justice or absolute capitalism?

These nuances about the law are typically lost in the din of superhero movies. Often in these films, enemies are inherently evil and inhuman — think of Thanos or Ultron in the “Avengers” series — and irredeemable, consigned to death or imprisonment. It makes what's going on here seem easier and less problematic than it actually is.

We've seen this myopic, absolutist mindset leaking over into politics. You'd be forgiven for wondering if George W. Bush had not watched one too many superhero movies when he uttered his infamous edict, “Either you are with us, or you are with the terrorists.”

If you’re a superhero nerd, you might be scribbling down all the exceptions to these points. After all, there are many nuanced characters who don’t fall into the good (or evil) bins. There are also superhero spats — such as “Captain America: Civil War” — that debate heroic, unilateral military action.

There are, too,  “alternate universe” comics such as “Superman: Red Son,” one-shots that question the inherent righteousness of Western, liberal politics. But they are exceptions to a Spandex-wearing rule. And even these alternate worlds commit the universal sin of depicting the citizens at large as hapless set dressing with no free will.

Indeed, by far the worst sin of the superhero genre, and one which supersedes all these, is the way in which the superhero movies depict the body politic.

If you’ve often felt like a meaningless cog in a vast machine, just be thankful you’re not a random citizen in a superhero flick. Stripped of your free will, you'd be subject to the whims of a vast super-machinery you cannot comprehend. In these films, the public plays a background role to superheroes and citizens are easily fooled by villains. They rarely have a say in what the elites — good or evil — decide is best for them. Does this sound familiar?

You might even argue that the rise of a self-perceived Übermensch like Donald Trump is tied to our nation’s myopic tendency toward superhero politics. After all, Trump positioned himself, again and again, as a superhero, a lone leader who could save us. “I alone can defeat ISIS,” and “Nobody knows the system better than me, which is why I alone can fix it,” were both phrases he actually said.

Though Bernie Sanders and Trump are often compared to each other given their populist undertones, actually listening to their rhetoric separates them. Sanders, in word and deed, has distinguished himself as the opposite of a superhero. “No, it’s not ‘Bernie can.’ ‘We can,’” he said at a summer 2016 campaign rally in California. It underscored the degree to which the candidate saw his cause as a movement, not a rally around a figurehead. Contrast that to Trump, who seems convinced that he can govern by diktat.

We are, then, living in the age of superhero politics. The voters — or at least, the Electoral College — chose a candidate who didn’t offer a vision of a movement from below, but of decree from above. Wonder Woman, Captain America and Iron Man also dole out justice from the heights (often literally, as flight is a pretty standard superhero trait).

If you watch a lot of superhero films, you might note that many end with scenes of the masses cheering, clapping or waving signs in support of the heroes. I’ve often wondered if there was a subtle self-awareness to this, if the CEOs of these movie studios had made sure to assure us that it’s okay to let the elites rule over us, so long as they maintain populist support.

In actuality, it's quite rare that elites come to our rescue. Indeed, even when they want to, it's unlikely they can. Who can save us from climate change? Who can help end racism, fix our infrastructure, heal economic injustice, end the patriarchy?

Historically, this kind of sweeping positive social change has come not from the elites above, but from street-level movements born of sweat and labor. The victories here have been won through hours of door-knocking, years of organizing and decades of protesting.

In fact, many of society's ills are the fault of the elites. Worshipping them through the totem of the superhero seems like a step away from recognizing and redressing that.

Take off the costume, and you’ll see that superhero politics are just neoliberalism in disguise. Waiting for heroes or giving them the reins of power has failed us and continues to fail us. Superhero politics is the antithesis of democracy, a form of elite technocracy. It's the rule of the powerful, selectively doling out their idea of justice on what they consider a mindless, applauding crowd.