"A Gray State": A right-wing conspiracy theorist films his own deadly descent into madness 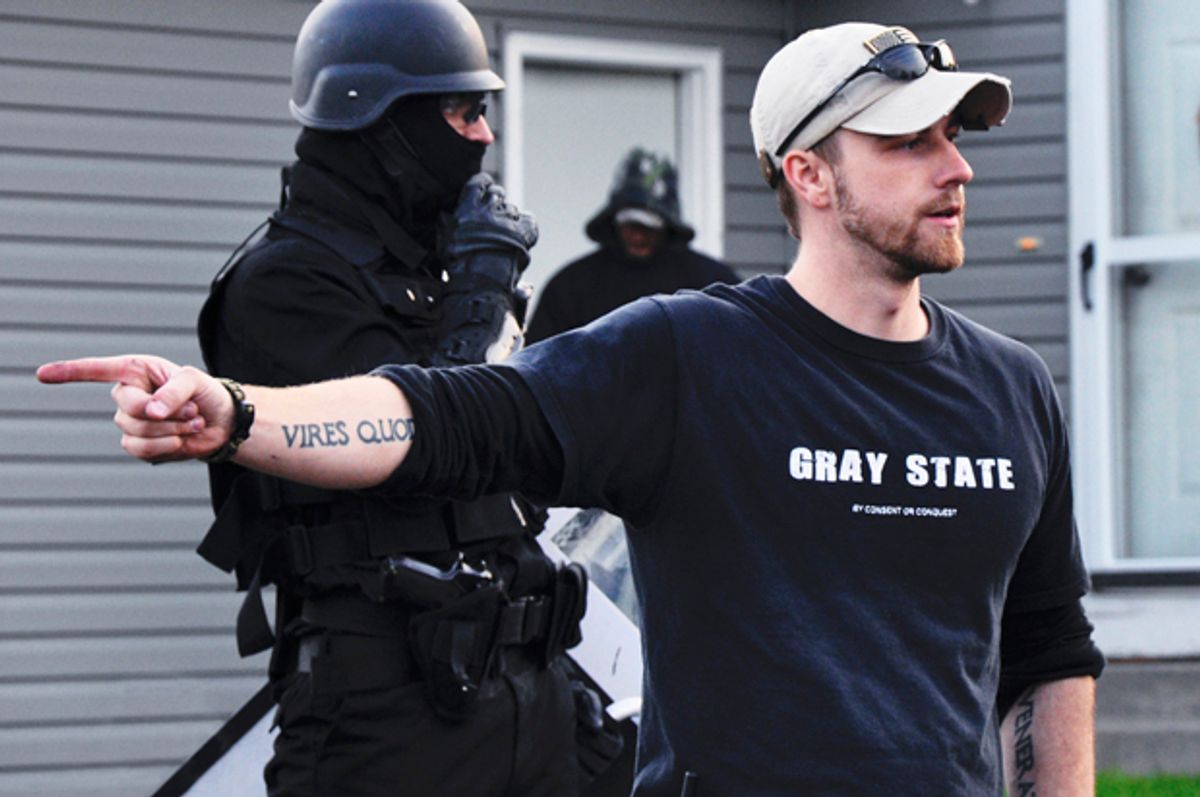 A young, budding filmmaker named David Crowley, his wife Komel and their daughter Rani, were found dead in their Apple Valley, MN home. Crowley was working on an independent film called “Gray State” which features the eerie log line, “By consent or conquest.” He self-funded the trailer, and clips from the ambitious project — which is set in a dystopian world where a government shutdown was eminent — illustrate Crowley’s potential as a filmmaker. And, yet, the development of the project also illustrates its creator's spiraling anti-government paranoia.

Nelson’s doc, executive produced by Werner Herzog, showcases Crowley’s genius and madness through copious amounts of video footage and selfies. He was an advocate for Rand Paul, and in contact with alt-right radio talk show host, Alex Jones. Crowley was also a Christian, one who married a Muslim (she had a successful business and made fabulous artisanal birthday cakes on the side) without embracing Islam. His tours in Iraq and Afghanistan left him PTSD.

As “A Gray State” unfolds, the truth is, as one interviewee says, “stranger and sadder” than fiction. Nelson takes viewers on a wild ride down a rabbit hole full of conspiracy theorists, news reporters, friends and family members, all of whom are interviewed about the case, each with their own idiosyncratic perspective. Nelson seamlessly weaves together video and audio clips along with Crowley’s home movies to provide details about David's life, work, family and sad, violent death.

Salon chatted with Erik Nelson about his remarkable, troubling film.

How did you learn about David Crowley and come to tell this story?

The back story is that I produced “Grizzly Man” for Herzog in 2005, which —if you strip it down to its basic parts — is about a charismatic figure who documents his despair into madness and is unaware he’s doing it. I was looking for a story with that same kind of power.

In 2015, I saw a report about [the death of] an alt-right filmmaker and his family in a Minneapolis suburb. It instantly caught my eye. I Googled “Gray State” and I came across his site, which included his selfies and videos of him with a Mohawk filming his family. If this is what he wants the world to see, imagine what’s out there under the surface! I was able to track down people who knew him, and I said I was interested in making a film on him.

Because he was a “conspiracy” filmmaker I knew the Alex Jones crowd would go absolutely ape-shit over it. I knew the story would be catnip to conspiracy theorists, and it more than lived up to the potential. There was much more of a story at first, and the deeper I went, the deeper I got.

How did you get the participation of David's family and friends?

I flew to Minneapolis and met with them, and spoke the truth to them. I said to them “There’s no road map, and I promise you won’t like this film. It won’t be something you’ll want to watch, but I can fill in the details the forensic police report didn’t. I believe there is more to the story than meets the eye, and this can be a form a therapy for you.” There were obvious and justifiable concerns — was it too soon? What will he uncover?

The film is more of a why-dunnit than a whodunnit? Can you discuss that aspect of “A Gray State”?

What this film is not is a by-the-numbers tidy film. It’s not a dissection of the alt-right movement. I glibly refer to it as “American Movie” meets “Grizzly Man” meets “The Shining.” It’s a psychological horror film of someone documenting — maybe knowingly or unknowingly — a descent into madness. I call it a core sample of American crazy. It’s got insane politics, insane narcissism, and the cult of his friends who make this movie. It’s got the Iraq war and gun culture and religion and spirituality. Is there an aspect to American crazy this film doesn’t touch on? If there is, I can’t find it.

David is a fascinating and charismatic character. How did you read him? Was he paranoid or paralyzed?

That’s the great thing about it, Gary, your impressions are as good as mine! Any insight we had, we put in the film. We didn’t hold anything back. David Crowley contains multitudes. He had it all: He was handsome, brilliant, a vet, married to a brilliant Muslim, gifted politically and a self-propagandist. If you think Trump is bad, think of what David Crowley would have been like!

He went off the rails not because he felt trapped and a failure, but the reverse. He was a raging success, and the process of success pushed him over the edge. I understand the pressures. I appreciated the filmmaking part where he had this dream and was ruthless in pursuing it.

I see David Crowley as the victim of a vast conspiracy. But it wasn’t a globalist United Nations’ Agenda 21 one; it was living in modern America. He joined the army because he watched “Black Hawk Down” and thought he can do that for real. That fucks you up. You live in a Minneapolis suburb, and you think you can do something outside your reach. You have social media and the alt-right culture who are expecting you to conform and create their fantasy for them. It’s a conspiracy thriller, but people are looking in the wrong places.

What was your impression of Komel?

You tell me! You’re seeing what I got. There’s no artifice, no narration. I’m not telling anyone what to think. I’m laying out the video that shows their relationship and I interviewed people about the relationship. My opinion doesn’t matter.

How did you assemble all of the videos, journals, photographs, recordings, and interviews? The film is expertly constructed.

What I did was when I did the interviews, was ask them to tell me what they know, not what they think. There’s no speculation around this story. What did you see? Putting it together, the original version started with the discovery of the bodies, and rolled back. It was pretty much chronological. We revised the structure. The guy was an obsessive selfie-documenting guy. He approached his family selfies in a way the director would approach making a film. That was completely unconscious. David’s film made the movie. We just put it together.

A great boon to us was the four-hour interview with him talking about his entire life. That was an “Oh My God” moment. It was David Crowley unplugged. Every time we’d get up a tree we’d find some amazing footage. So the impact of Alex Jones on a susceptible mind, we have David Crowley’s in the basement reacting to Alex Jones.

How much footage did you have to work from?

13,000 stills, 23 terabytes of footage and massive amounts of selfies. It was a disturbingly intimate relationship with this guy. You have to have a certain kind of detachment to go through it. I had an obligation to David and Komel to tell the story right. Not make him a hero or her a traditional victim. The unbelievable cakes she made — when I found those pictures, I thought what the hell? What are these? They were insanely creative artistic cakes.

David was very much in support of Rand Paul and had contact with Alex Jones. How do you describe his political stance?

I think he was a Libertarian. He looked at Alex Jones as a commercial marketing [tool]. He bought into some of the birther conspiracy, but he wasn’t an alt-right neo-Nazi. He was much more a Libertarian, a guy who had an accurate bead on the Middle East. He was a conscientious objector for his second tour. He didn’t want to go on the front line.

What was Werner Herzog’s role as Executive Producer?

Well, one of the important things that Herzog contributed to the film was reassuring me that I wasn’t completely crazy. And if you’re counting on Herzog’s definition of crazy, you’re way lost!

The film is unsettling, but in a good way. Can you talk about what you want audiences to think about after seeing “A Gray State”?

It’s designed as a piece of troubling art to get under people’s skin. That was the only way to tell the story. You’re never going to know the “why.” How could you have a logical explanation for this heinous crime? Weirdly, you’re half way there to having it make sense and that’s an uncomfortable place to be.

The key is it’s a psychological horror thriller. It’s not a conventional documentary. When the lights go up in the theater, everyone looks like they’ve been hit in the head with a ball peen hammer. Everyone wants to see it again and try to figure it out. People don’t know how to react; they don’t know what to think. I’m happy to make a film that gets in people’s heads.

See an excerpt of "A Gray State" below: