Just like talk radio before it, growth of alt-right social media is the real crisis behind Trump's CNN tweet 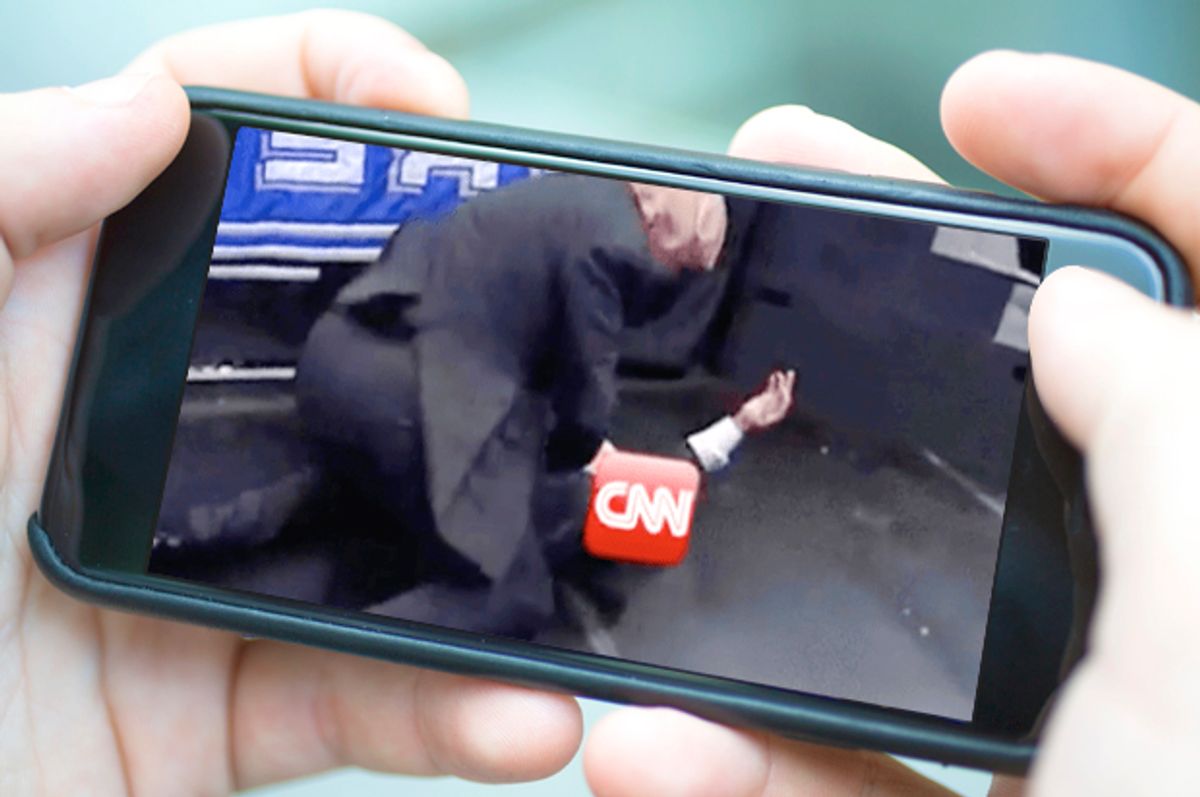 This week saw President Trump cross yet another line in his use of his Twitter account.  Trump tweeted a meme of himself symbolically beating up CNN.  While to some it might have appeared to be a funny way to epitomize Trump’s feud with CNN, to many the meme was aggressive, immature and inflammatory. CNN took the attacks seriously and released a statement stating, “It is a sad day when the President of the United States encourages violence against reporters.”

There are lots of questions to be asked about the tweet, not the least of which is what it tells us about the judgment of the president and those who work with him.  But the real story here is not about Trump; it’s about the increasing power and presence of alt-right communication on various social media platforms, from Twitter to YouTube to Reddit to Facebook.

What is interesting is the way that rants and memes and other alt-right tirades have major success in shaping public opinion. And while there is a through line between these outbursts and fake news, it is important to point out that the rants are likely far more influential than fake news in shaping political perception.

This means that the real lesson for CNN and other mainstream news outlets is not that the president is immature enough to share a stupid meme attacking the news but rather that their focus on fake news has distracted them from the real story: the rise of emotional, aggressive, inflammatory, bigoted communication on social media and the power these posts have had in shaping the ideas of the Trump-supporting alt-right.

Well beyond the problem of fake news, which at least tried to pose as news, these posts are pure opinion, outburst and excess.  There is nothing about these posts that even remotely compares to news reporting — and that’s why they are popular. At a moment in U.S. history where trust in the news is at a record low, we are seeing the growing power of individuals outside of traditional media circuits who have built a following by suggesting that their voices are more authentic and more accurate than those of the so-called liberal, elitist, majority-silencing news.

The key to the story is the connection between Trump’s tweet and its original source. As Vox reported, the source “was discovered to be a Reddit forum known for Islamophobia, racism, and frequently violent hate speech.” It was originally posted on Reddit’s largest pro-Trump community.

The Reddit user HanAssholeSolo released the original GIF version of the clip used in the president’s tweet, posting it to Reddit’s  r/The_Donald. As Vox reports, the Reddit community known as The_Donald is both a huge and hugely controversial part of Reddit. It gained in popularity over the course of 2016, as Trump’s presidential campaign gained momentum.

In November, shortly after the election, the New York Times published a profile of the subreddit calling it, “one of the most influential communities within one of the most significant websites on the internet.” The Times reported that according to its moderators, The_Donald was “the largest, best and closest thing to an official campaign subreddit for Donald Trump 2016.” Analysis of its posts showed that it was “home to copious Islamophobia, trolling of liberals and near constant bashing of Hillary Clinton.”

Just as the distinction between National Enquirer-type fake news and actual news has blurred for many citizens, there is increasing evidence that social media rants are playing a larger and larger role in creating the “information” that shapes public perceptions. As Vox puts it, “there’s a reason to take Trump’s tweet seriously, and that is its direct connection to the violence the alt-right routinely espouses.”

It isn’t just the violence espoused by these sites that is the problem; it is the increasing power of the alt-right across these platforms and the way that these rants become mainstreamed as sources of public information that should cause us to worry.  While attention has focused on the way that Trump and his team have demonized the free press, it is time to pay more attention to the encroaching power of the alt-right on social media to influence national dialogues.

Despite the fact that “HanAssholeSolo” attempted to use what I have called “The Colbert Defense” of crying satire to back out of his offensive statements, the archive of his posts demonstrates “hate speech in abundance and no regard for the people he might hurt.” And it isn’t just the one user that can be characterized that way. Overall the Reddit community on The_Donald frequently shares hate speech posts that are openly Islamophobic, misogynistic, racist and outright offensive. This makes the fact that both Twitter and the White House defended the tweet against accusations of hate speech and violence even more disturbing.

The story of the Trump tweet, the alt-right and Reddit is only one among many across social media platforms. For instance, a recent study by Zack Exley, Joan Shorenstein Fellow at Harvard University, shows that political channels on YouTube are currently dominated by the alt-right.

Although often overlooked by mainstream media as too fringe to matter, Exley’s research shows that these YouTube channels receive millions of views, espousing recycled National Socialist and white nationalist ideologies with a modern twist. His study explains how the alt-right uses these channels to build influence and spread its ideas among its audience, much in the same way that right-wing talk radio shaped public perceptions for decades.

Exley points out that just as the left missed the growing role of right-wing talk radio, it is now missing the power of the alt-right on social media.

Exley claims that political rants on YouTube are dominated by right-wing personalities. It is a claim echoed by Vice News too. The New York Times calls YouTube “almost a kind of internet nation-state” given the fact that it has more than a billion users. About 400 hours of video uploaded every minute and 1 billion hours of video consumed every day.

The focus of Exley’s study is a demonetized YouTube channel that has more than 180,000 subscribers and 18 million views that he suggests epitomizes the sort of alt-right rants that gain traction on YouTube. Exley suggests that it isn’t just that the alt-right dominates the YouTube political rant; it is that they are cornering the market on the format, creating a new form of communicative style that is gaining increasing traction among viewers.

Even more important, these rants and other forms of aggressive communication aren’t just being picked up by our president and sent out to the public; they are also affecting public behavior, moving from an online, virtual space into real action. Such was the story of the man who shot up the pizza parlor purportedly tied to Pizzagate, a conspiracy theory about a Democrat-run pedophilia ring that began on 4chan.

As BuzzFeed notes, there is "a sprawling new universe of far-right internet personalities who have aligned themselves with a ‘new right’ or ‘alt-right’ or ‘new far-right’ political youth movement in the US.”  This group is interested in moving their trolling into the real world.

Whether on Reddit or YouTube or another form of social media these alt-right rants share a few key beliefs. As Malia Rolt explains in a piece on YouTube and the alt-right, those posting right-wing hate speech “all believe that the media is untrustworthy and political correctness has gone too far, and see advocacy for equality for all as a threat to freedom of speech.”

The issue of freedom of speech and social media, of course, is a tricky issue since all of the platforms have rules and restrictions over the sort of content they allow.  And yet, there is some evidence to suggest that the application of those rules may indeed favor aggressive speech by the right more than from other quarters.

For instance, a report from ProPublica suggests that Facebook’s internal rules for censoring hate speech is biased to favor both the right and celebrity users. In contrast, “Facebook users who don’t mince words in criticizing racism and police killings of racial minorities say that their posts are often taken down.”

They compare two posts. One by a U.S. congressman who wrote a post after a terrorist attack in London that called for the slaughter of “radicalized” Muslims. “Hunt them, identify them, and kill them,” declared U.S. Rep. Clay Higgins, a Louisiana Republican. “Kill them all. For the sake of all that is good and righteous. Kill them all.”  And one by Boston poet and Black Lives Matter activist DiDi Delgado: “All white people are racist. Start from this reference point, or you’ve already failed.”

What this week’s Trump Twitter war against the mainstream news media teaches us is that CNN should be worried — but not about Trump’s attacks, rather about the fact that an increasing number of U.S. citizens are forming their political ideas based on alt-right rants, and not on anything that even remotely resembles information.

Rather than fight Trump, outlets like CNN have to take seriously the fact that a major portion of the population simply doesn’t trust them. Even worse, they don’t find CNN interesting or compelling. And, as Carlos Maza has pointed out, the fact that CNN treats politics like sports isn’t helping. By covering politics as if it were a game, CNN hypes controversy more than it reports the truth.

The challenge facing CNN isn’t a president who will tweet an immature and aggressive video of himself tackling them; it is the reality that a significant subset of Americans, including ones who work in the White House, are more likely to be influenced by a Reddit user who goes by the ID HanAssholeSolo than they are by a commentator for CNN.