The erstwhile Captain Kirk is angering progressive Trekkies with his tweets, but the situation isn't that simple 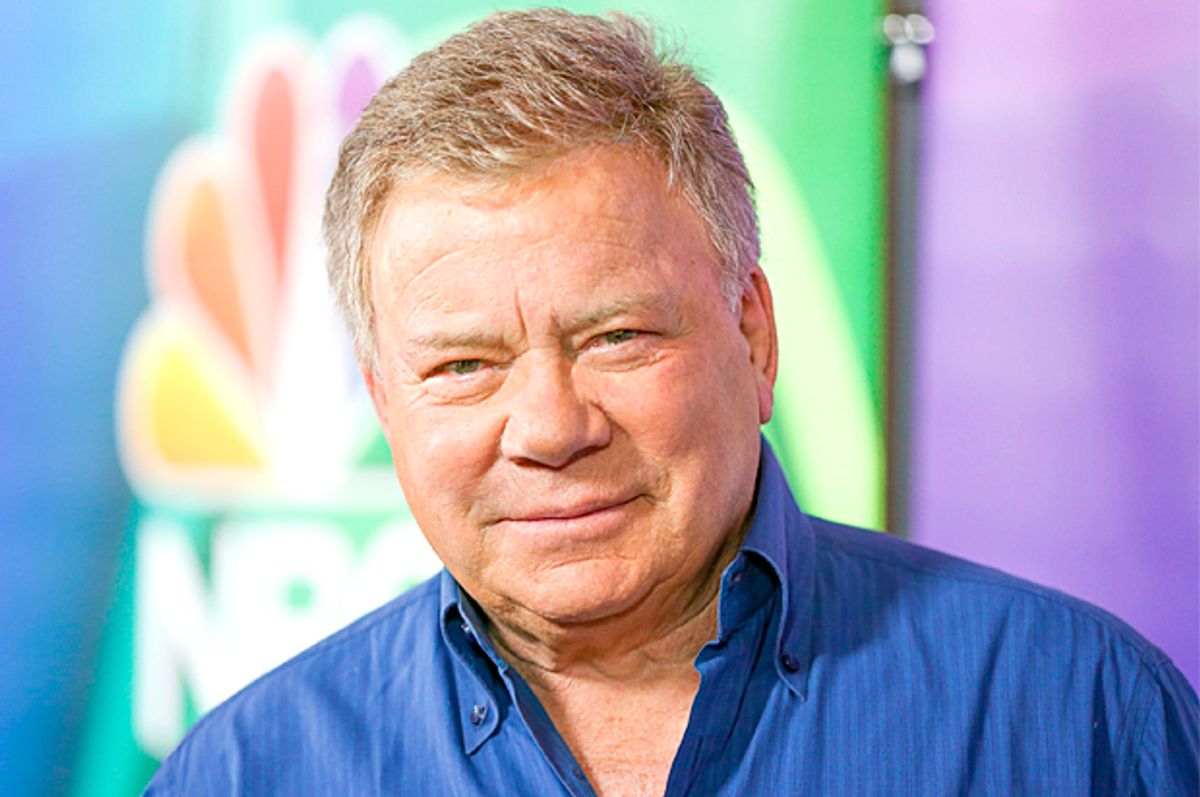 What to make of William Shatner's ongoing Twitter battle against Social Justice Warriors?

The tweet storm has been raging for more than a day now, so here are some samples that should give you an inkling of the taste of the overall entree.

Clearly, Shatner has violated his own self-proclaimed "no politics" rule when it comes to tweeting. But who cares? That's semantical.

What's more interesting is the question raised by Shatner of whether individuals who support left-wing views on social justice issues are advocating one group's superiority over another, as opposed to supporting equality. There's debate over whether Shatner is betraying his own '60s-era belief in social justice issues, one that famously culminated in his sharing the first American televised interracial kiss between himself and African American actress Nichelle Nichols.

Regarding his claims about so-called "SJWs" wanting superiority instead of equality, it is worth noting that his line of reasoning sounds an awful lot like the tripe you tend to find on Reddit. This is, most likely, not a coincidence.

Back in 2013, Shatner publicly described his own experiences on Reddit, at the time denouncing the website for its "immature, horrifically racist, sexist, homophobic, ethnic... etc.. posts that are just ignored here." He also criticized it on the grounds that "by allowing these children to run rampant and post whatever they feel will cause the most collateral damage if Reddit is biting off it's own nose in taking that step to become a mainstream community."

Four years later — in the period following not only the election of Donald Trump to the presidency, but also the reactionary backlashes against diversity in everything from video games to the "Ghostbusters" and "Star Wars" franchises — it seems that Shatner's critique has become tragically prescient. He was wrong in suspecting that Reddit and other social-media users would lose out on their ability to become mainstream by allowing "racist and other hate mongers to group, congregate, incite and spread their hatred." Instead those sites took the reactionary bile being spewed by its most vociferous members and brought it with them into the mainstream, with grievous social consequences.

Shatner's parroting of the anti-SJW rhetoric regularly seen on those sites — complete with the alt right nomenclature about "snowflakes" and "misandrists" — is a dead giveaway that he has fallen victim to the very trend he prophesied.

Other writers have documented the gradual seepage of 4chan-esque rhetoric into the actor's political statements, and he was noticeably absent from a letter signed by many of his original series colleagues and their families denouncing Donald Trump as un-Trekkian. It's all very the abyss gazing into thee.

As for the seeming betrayal of his own 1960s-era political values, Shatner deserves credit for fighting for that interracial kiss between himself and "Star Trek" co-star Nichelle Nichols in the 1968 episode "Plato's Stepchildren." While that creative decision may seem unremarkable in 2017, it was bold enough then that, as "Star Trek" co-star, George Takei recalled in 2015, the episode was blacked out in the South.

So how do we reconcile the 1968 Shatner who fought for racial equality with the 2017 Shatner who rants against social justice activists?

Human beings are complex creatures, and cultural critics need to withstand the impulse to negate one part of a figure's legacy when something else pops up which seems to call it into question. Regardless of whether Shatner's political views in 2017 are correct or not, the 1968 Shatner took a brave stand against social injustice and wound up winning that battle. It is not just morally wrong, but factually inaccurate, to argue that that can be taken away from him.

At the same time, Shatner's achievement in 1968 doesn't give him a pass for spouting nonsense on similar issues in 2017. While the passage of nearly half a century has glossed over how we remember the civil rights movement of the 1960s, the reality is that most of the same criticisms being hurled against SJWs today are substantively identical to what was being said about their antecedents. Feminists and African-American activists were denounced as wanting superiority instead of equality, college students were accused of being coddled and entitled, conservatives insisted that discrimination no longer really existed, and so on and so on.

It is telling that, for all of Shatner's broad generalizations about the modern left, he never provides any specifics as to what issues lead him to believe that they're covert supremacists instead of advocates of social justice. This is most likely because he doesn't have any specifics to work off of (at least nothing that couldn't be instantly pulled apart and discredited by his left-wing critics). Like so many of his Reddit and 4chan counterparts, he is making broad statements and hoping that the like-minded will identify with them.

It seems pretty clear that there has been a decline in Shatner's character, at least when it comes to his past support for equal rights. It's unfortunate and his critics are right to call him out on it. That doesn't mean that we should struggle with cognitive dissonance over how the man who courageously opposed racism in 1968 can now argue for right-wing establishment views in 2017.

These things happen. Shatner is not the first former progressive to lose his way — nor will he be the last.