With crime at historic lows, the trailer for the upcoming film seems culled from a paranoid NRA video 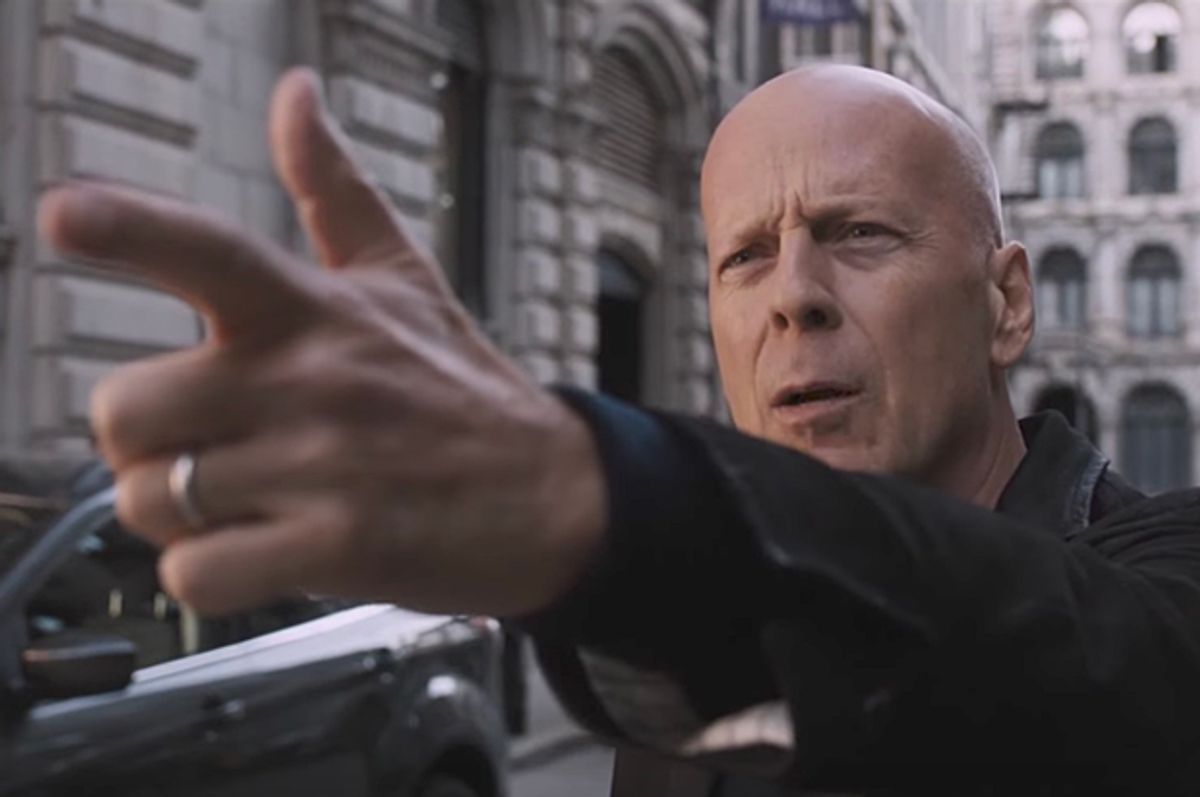 Despite what red-state, red-meaters would have you think, violent crime has actually plateaued at historic lows across this country of ours. While black and Latinx citizens are still run through a wood chipper of robbery and murder on a daily basis, even they are experiencing a world that is little like the "American carnage" our blinkered, hateful commander in chief proffers.

And, yet, we have this: The trailer for Eli Roth's remake of the 1974 exploitation classic "Death Wish". With Bruce Willis taking over the lead role of Paul Kersey from the late Charles Bronson, it's a vision of America that seems scripted by the paranoid apocalypse fetishists over at NRATV.

The plot here is essentially the same as the 1974 original's: everyman Kersey seeks revenge for the murder of his wife and the rape of his daughter by a gang of marauders in a bloody, merciless vigilante campaign that soon shifts from the personal to the universal. Those who like to see villains meet unmeasured justice at the barrel of a gun wielded by an otherwise unassuming citizen will get their thrills from both.

What's different about Roth's take on Michael Winner's original, though, pulls the enterprise into the anti-reality vortex of Trumpian thought. Whereas Bronson's family met tragedy in an apartment in the then-crime plagued '70s Manhattan, Willis' suffers a home invasion the affluent idyll of suburban Chicago. Whereas Bronson's Kersey enacted revenge in an era when cops truly were incapable of dealing with a record level of homicides, Willis does his dirty work in a time where, if anything, cops do too much in the name of law and order. Whereas Bronson fought his war with a snub-nose revolver, Willis fights his with a sexy array of fully automatic weapons to an AC/DC backing track.

There's more concerns as well. While, yes, a very good and fun film, 1974's "Death Wish" is a clearly racist text, best left alone by modern filmmakers. The glamorization of high-capacity firearms is fundamentally troubling in an age where white men (and boys) use them again and again to take what they see as revenge on society. As well, while Bronson's grim deadpan matched well with the dark humor of the original film, Willis' lively, ready charm in this trailer make spree killing seem a veritable hoot. Watching a preview where vigilantism becomes a method of self-care, why wouldn't you want to respond with every crime on your own with murderous, instant retribution? It's good for the skin!

And should we be surprised? Willis has honed his conservative, blood-lust credentials over a career that declined from irreverent, human action to C-grade mirthless slaughter. Roth, for his part, helped cement torture-porn as a genre and has trafficked in a rare kind of misogyny, racism and misanthropy in his works — despite all his dudeish claims to the contrary.

Look for it to make oodles of cash when it debuts in theaters November 22.