"Lazy Boy": Newsweek delivers one of the harshest covers about Donald Trump yet

Newsweek delivers a strong criticism of the commander in chief 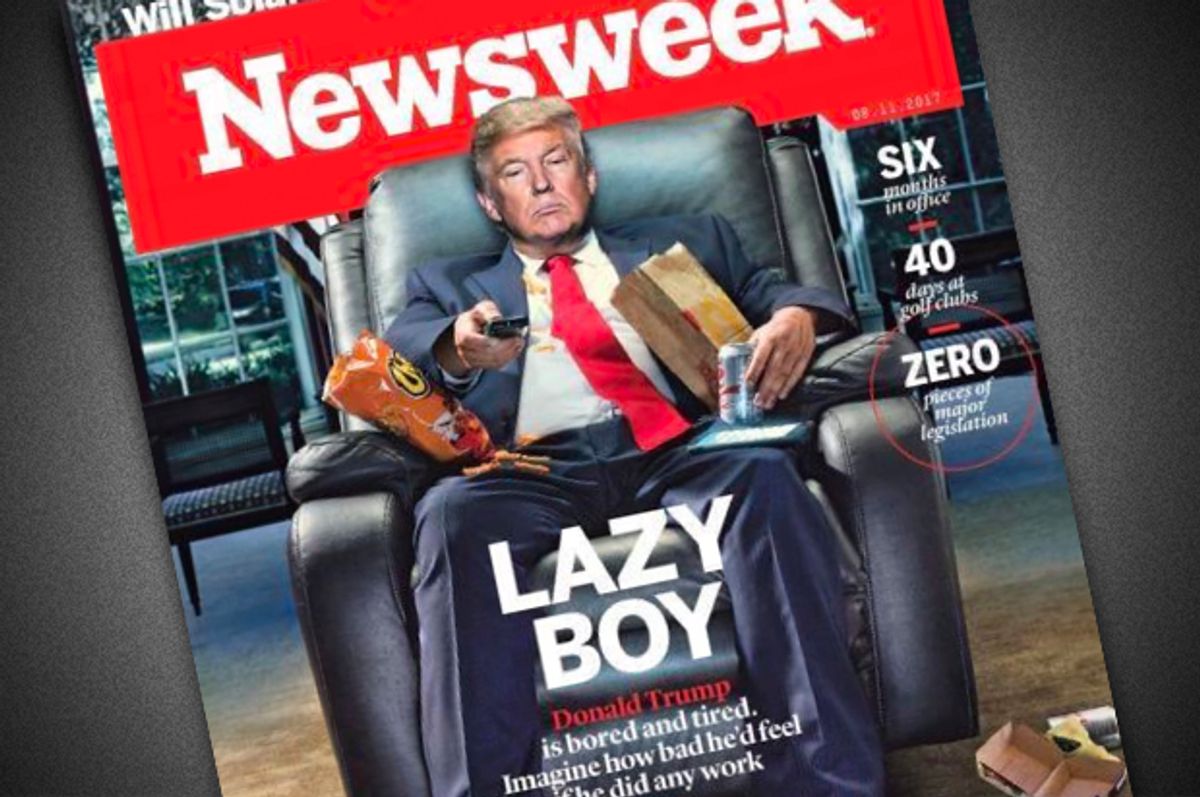 A picture is worth a thousand words, but the cover of this week's issue of Newsweek is worth thousands more — which delivered a huge blow to President Donald Trump's big ego.

The cover, in big white letters, reads, "Lazy Boy," and beneath that in smaller size, sums up the Trump presidency: "Donald Trump is bored and tired. Imagine how bad he'd feel if he did any work."

The illustration is Trump pointing a remote straight ahead as if he is watching T.V. on a big comfy chair. The couch-potato-in-chief has a fast food container on the ground, a bag of cheetos on his lap and spread over his body, a can of soda in his hand and an iPad on his thigh.

And the feature story isn't much kinder. Here's how Newsweek described his work ethic.

Instead, he is playing golf and tweeting anti-CNN wrestling memes. When the weekend concludes, Trump returns to the D.C. swamp with all the enthusiasm of an office lackey slouching toward his cubicle on Monday morning. Only six months in, he seems “a most unhappy warrior,” in the words of Trump biographer and CNN commentator Michael D’Antonio. The scowl that haunts his face, the monotone he uses to deliver official pronouncements: These suggest a second-term lame duck dreaming of a lucrative post-Washington book deal. . .

Seemingly aware that he’s being called lazy, Trump described himself in a May 12 tweet as “a very active President with lots of things happening,” which only made him sound like a teenager informing his parents that he’d definitely done his homework. A writer for The Washington Post decided to investigate, using publicly available logs to conclude that Trump’s schedule was “awfully light…. We are left to make one of two assumptions,” the Post concluded. “Trump either is hiding a lot of his presidential business from the public, or he is not doing much at all.” Reuters, in turn, found that in his first 100 days in office, Trump “made fewer appearances outside of the presidential bubble than his three immediate predecessors,” confining himself for the most part to the White House and Mar-a-Lago.