Charlottesville and history: Violence has been endemic to the American far right for generations

Sadly, the violence we saw in Charlottesville is nothing new in the hateful history of the American far right 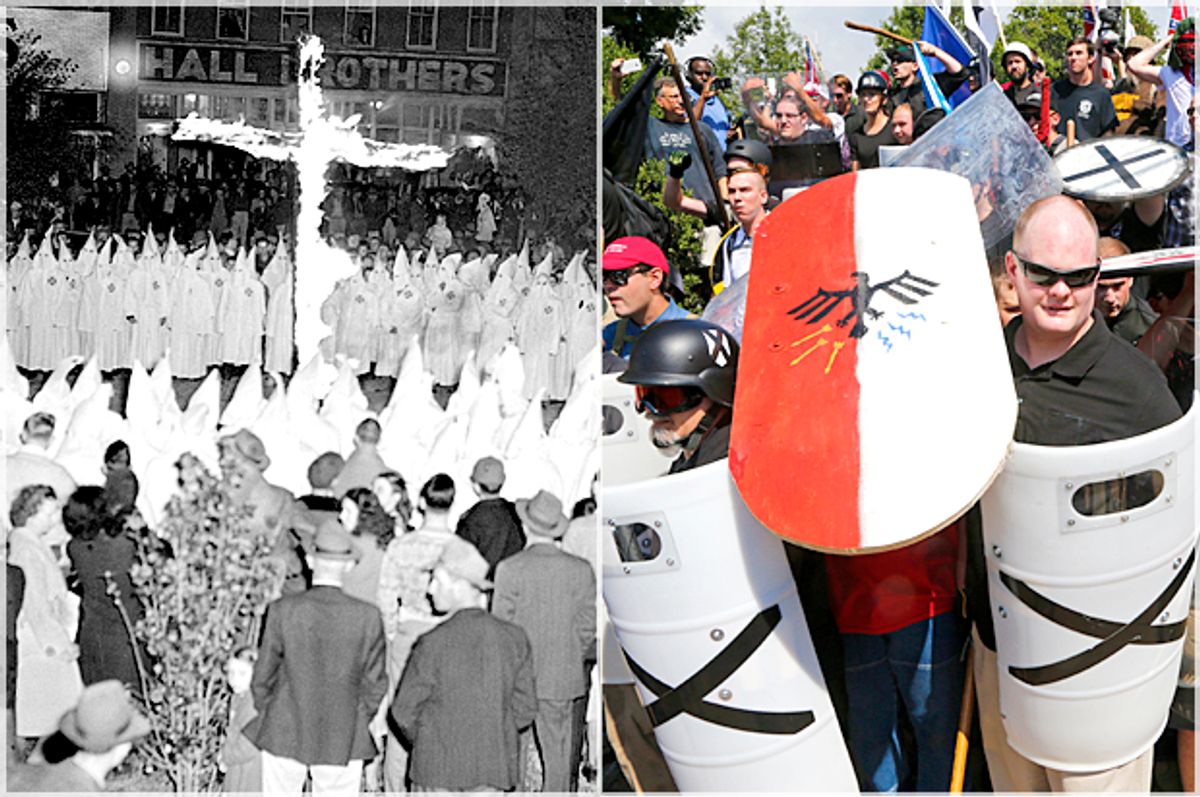 It is impossible to have an honest discussion about the violence in Charlottesville without confronting the violence inherent in American far-right ideology.

I'm not talking about mainstream conservatism, which like mainstream liberalism is rooted in abhorrence for that kind of social disruption. It would also be unfair to denounce staunch right-wing conservatives — the ones who harken back to Ronald Reagan as a political hero — with the stigma of violence.

But you cannot subscribe to an ideology that is based primarily on hatred without ultimately -- if at times only implicitly -- embracing violence as well.

Run your fingers through the history of American far right politics and this point becomes clear over and over again.

The far right — a category that includes racists, xenophobes, misogynists and anti-government militants of all stripes — have vastly dominated the lethal form of American political violence since the 1960s. (In that sense the recent congressional baseball shooting, apparently by a deranged leftist, ran against the larger trend). As Mark Pitcavage, a senior research fellow at the Anti-Defamation League's Center on Extremism, told NPR last year, "In the past 10 years when you look at murders committed by domestic extremists in the United States of all types, right-wing extremists are responsible for about 74 percent of those murders."

Similarly, a joint report issued last year by the Investigative Fund at the Nation Institute and Reveal from the Center for Investigative Reporting discovered that right-wing extremists had carried out almost twice as many terrorist attacks in the U.S. (115) as had Islamist militants (63) within the previous nine years. In that same period, roughly one-third of those right-wing terrorist events caused fatalities, whereas the same was true for just 13 percent of Islamist terrorist events. (In fairness, 90 people were killed by those Islamist attacks, while 79 were killed by right-wing terrorists -- a difference almost entirely attributable to the mass shootings in Orlando and San Bernardino).

Nor is the far-right propensity for violence limited to mass shooters and other domestic terrorists. When Alabama Gov. George Wallace ran for president in 1968 on an openly racist and right-wing extremist platform, his supporters were reported to physically attack nonviolent protesters, with the candidate himself hinting that he would murder protesters himself if they laid down in front of his limousine. This, of course, is the tradition on which Donald Trump drew, either consciously or subconsciously, when he encouraged violence against protesters at his rallies nearly half a century later.

As historian Kelly J. Baker noted in the Atlantic last year, Trump's threats of violence were also reminiscent of Ku Klux Klan rhetoric from its 1920s heyday. That decade saw an upsurge in Klan mobilization (peaking at 4 million members) and in acts of Klan violence against racial minorities and immigrants. Furthermore, the KKK reached an unparalleled height of political influence, nearly nominating the Democratic presidential candidate of its choice in 1924 and successfully pushing for laws that placed stringent restrictions on legal immigration.

Indeed, far-right violence is embedded in the very iconography embraced by that movement. As historian David Blight has pointed out, Civil War symbols like the Confederate memorials being taken down in Charlottesville (which was what prompted members of the far right to assemble there) were created in large part to reinforce a code of white supremacy throughout the United States. The event such memorials commemorated, it must be remembered, was also one rooted in violence — a collection of states using anti-government rhetoric to protect a white supremacist society through violent rebellion against the federal government.

Why is the far right so disproportionately violent, to the point where it creates literal civil wars and surpasses any other recent political movement in this country when it comes to spilling blood?

I turn to this quote from Abraham Lincoln:

The shepherd drives the wolf from the sheep’s throat, for which the sheep thanks the shepherd as a liberator, while the wolf denounces him for the same act as the destroyer of liberty, especially as the sheep was a black one.

Lincoln meant that metaphor to explain how opposed sides can have differing definitions of the word "liberty," but it also explains why one side is inherently more prone to violence than the other. While most people and most parties in American politics, from left to right, at least ostensibly support the ideal of equality -- as expressed so memorably by Thomas Jefferson in the Declaration of Independence -- the far right rejects that principle.

Rather, the far right is largely dedicated to regaining a status of supremacy that it believes it has lost. When those who gathered in Charlottesville, and those like them, list their grievances against African-Americans, Jews, Muslims, Latinos, women and members of the LGBT community, it isn't because they have actually been oppressed or wronged by these groups. Rather it is because, even a few decades ago, being a straight white Christian male would have privileged them over every other member of society.

Like all forms of systemic privilege, that had to be enforced through violence. Now that the political mainstream is moving away from those supremacist ideas (at least in the pre-Trump era), this loss of unfair privilege strikes them as some kind of terrible wrong.

They are indeed the wolves at the sheep's throat, who bemoan the gradual triumph of the shepherd's worldview.

How do we address this? Former Homeland Security Secretary Janet Napolitano had some interesting ideas about raising awareness in her 2009 report on the rise of right-wing extremism, although even the fact that she mentioned right-wing extremism as a problem launched a political firestorm. Certainly it is important to follow the lead of the many Democrats and Republicans who condemned President Trump for trying to blame both sides.

In the end, though, the most powerful tool is simply to recognizing that not all ideologies are made equal. One can in good faith disagree with everyone from Bernie Sanders and Hillary Clinton to Ted Cruz to John Kasich while still acknowledging their right to occupy the political stage. A movement of people who want to make one race or one religion or one gender supreme above all others, however, deserves no respect and should receive none. What we saw in Charlottesville on Saturday illustrate that all too well.