Welcome to the Breitbart era: Steve Bannon's former site is the new monarch of right-wing media 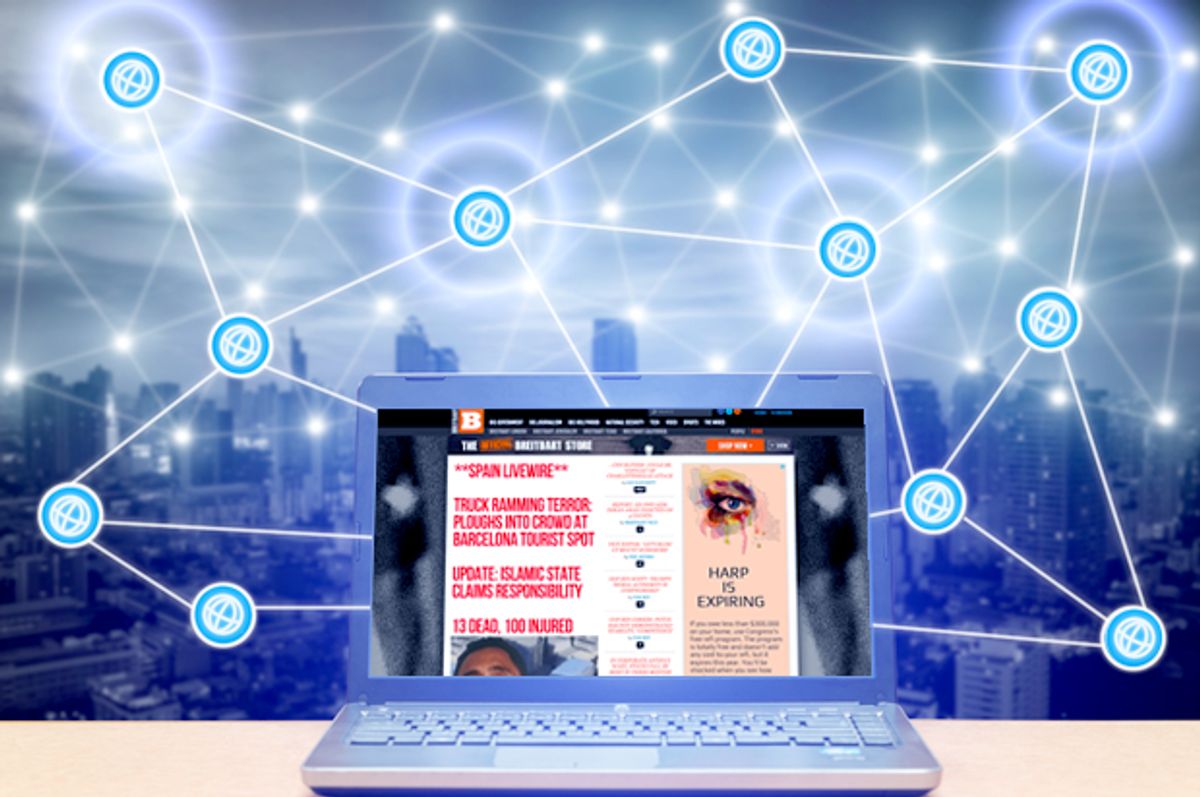 So in the midst of a national firestorm over neo-Nazis and neo-Confederates coming together under the banner of white nationalism to "Unite the Right" last weekend in Charlottesville, presidential adviser Steve Bannon, former publisher of Breitbart News,  the self-proclaimed "platform of the alt-right," decided out of the blue to call up Robert Kuttner of the liberal American Prospect to chew the fat. Kuttner told Rolling Stone's Matt Taibbi that he believes Bannon when he says he forgot to say it was off the record and that he really saw it as "a candid strategy talk with a comrade." Kuttner said:

[Bannon] simultaneously tries to make alliances with lefties on economic nationalism, while doubling down on the racist, anti-immigrant stuff, and assumes that people will naively work with him on selected issues and excuse his larger role. It's classic hubris.

If Bannon had been able to persuade his boss to tackle infrastructure right out of the gate when the Democrats were still reeling in disbelief, and if he had distanced himself from the worst elements of the right once he took office, that might even have worked. But that also would have required the boss to be someone other than who he is.

People have been focusing on Bannon's comments that the far right are "losers" who need to be crushed, and his taunting of the left, which he hopes will "keep talking about race" so Team Trumpists can win on economic nationalism. This is disingenuous to say the least. To the extent Bannon truly believes that the neo-Nazis are "losers," it's largely a matter of aesthetics. As Vice reporter Elle Reed explained on MSNBC on Wednesday, the "alt-right" is re-branding itself as the new fascism:

That means getting rid of swastikas because they call that a dead ideology so there's no point in bringing that out. They also want to cut out, as they call it, "white trash." They want to look like a middle-class movement with clean-cut, good-looking men. It's a movement focused on aesthetics. They want to look like successful people so that people want to join them.

When Bannon was the publisher of Breitbart News he oversaw the publication of the manifesto for what Taibbi describes as the" snooty, college-based wing of the racialist right Bannon leads ... the thinking man's Nazi movement" called  "The Establishment Conservative's Guide to the Alt-Right." Bannon knows which side his swastika is buttered on. Insulting the "low-IQ thugs" of the neo-fascist right may best be seen as his own version of Bill Clinton's Sistah Souljah moment.

Bannon's "outreach" to the American Prospect was a transparent attempt to exacerbate what he sees as the division on the left between economic populism and "identity politics." Perhaps he was under the weather or had had a few cocktails but Kuttner was not born yesterday saw through his ploy.  Choosing this moment to make such a pitch was ill-timed to say the least.

But if Bannon's stategic prowess is overstated, his propaganda chops are not. At that he is very, very good and extremely influential. On Wednesday Robert Faris, Ethan Zuckerman and a group of scholars at Harvard’s Berkman Center and MIT’s Media Lab released their full study about the effects of media, particularly online media, on the last election. If there is a superstar among all the media outlets it was Breitbart News.

This is a fascinating finding considering all the money and amplification that Fox News and talk radio -- led by the Big Kahuna, Rush Limbaugh -- had created over the years. But it seems the right was looking for something fresh and found it in Breitbart, which, according to the study, was the single most important information hub for the right wing on the internet during the presidential campaign.

If you are still scratching your head that someone as ill-prepared and outrageously unfit as Donald Trump could get tens of millions of people to vote for his, the study explains why:

Our clearest and most significant observation is that the American political system has seen not a symmetrical polarization of the two sides of the political map, but rather the emergence of a discrete and relatively insular right-wing media ecosystem whose shape and communications practices differ sharply from the rest of the media ecosystem, ranging from the center-right to the left. Right-wing media were centered on Breitbart and Fox News, and they presented partisan-disciplined messaging, which was not the case for the traditional professional media that were the center of attention across the rest of the media sphere. The right-wing media ecosystem partly insulated its readers from nonconforming news reported elsewhere and moderated the effects of bad news for Donald Trump’s candidacy.

While we observe highly partisan and clickbait news sites on both sides of the partisan divide, especially on Facebook, on the right these sites received amplification and legitimation through an attention backbone that tied the most extreme conspiracy sites like Truthfeed, Infowars, through the likes of Gateway Pundit and Conservative Treehouse, to bridging sites like the Daily Caller and Breitbart that legitimated and normalized the paranoid style that came to typify the right-wing ecosystem in the 2016 election

Trump pulled off his electoral miracle for a lot of reasons. But the data is clear: He couldn't have done it without Steve Bannon and Breitbart.

According to this New York Times profile of Breitbart editor Alex Marlow, the site is now suffering from growing pains, having lost some of its bigger names over the past year due to controversy over its editorial direction in the Trump era. Marlow wrings his hands over the perception that Bannon is still directing the site's editorial line for his own nefarious purposes to wield power in the White House. He also insists Breitbart is moving beyond the hyper-partisan, bomb-throwing style that got the site where it is and made it so influential.

Perhaps the Breitbart management needs a new slogan. I hear "Fair and Balanced" is available.