Because it's 2017, Breitbart is selling Steve Bannon fidget spinners 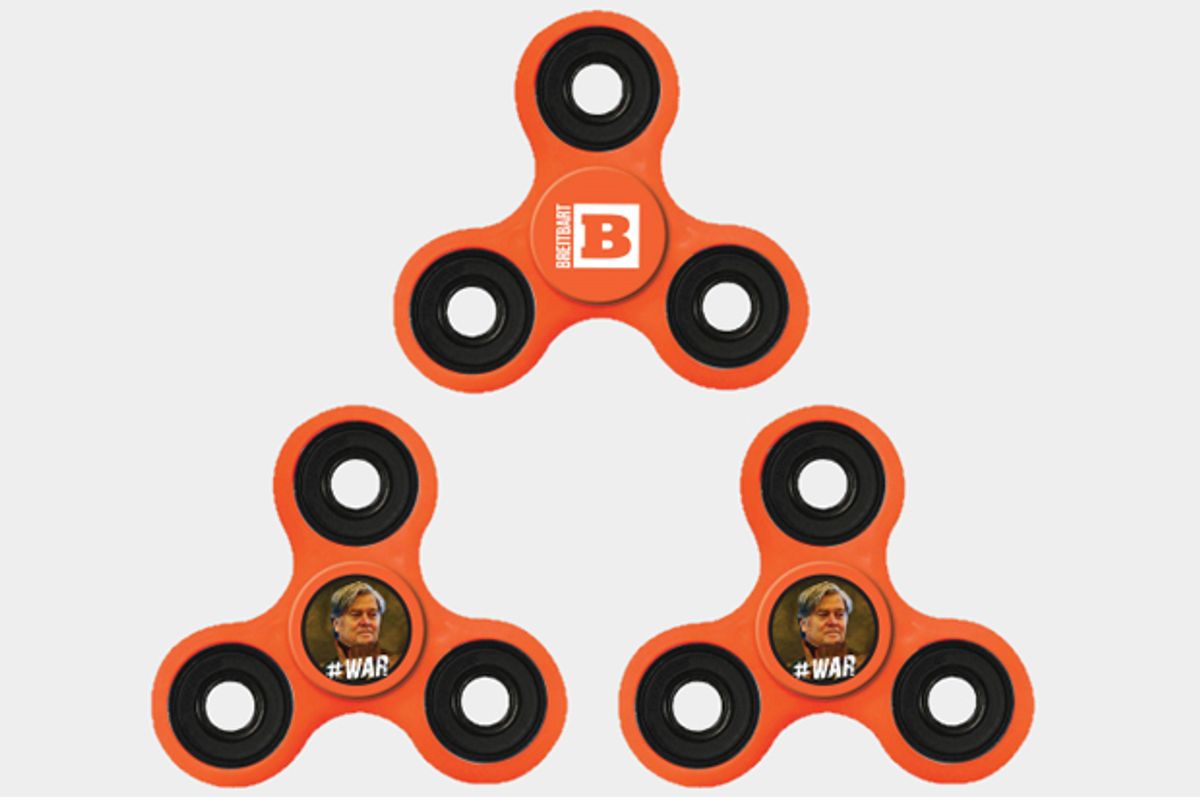 After the press revealed earlier today that a prankster fooled a Breitbart editor into admitting that the media property is willing to smear Jared Kushner and Ivanka Trump, the conservative website could perhaps use good press, ideally some related to returning leader Steve Bannon.

And, yet, the first visible signs of the ignominiously fired Trump advisor's planned revenge on his opponents and detractors is, to use his former employer's favorite expression, sad.

Right now you — yes, you — can hop over to Breitbart's online store and order yourself a branded Steve Bannon fidget spinner featuring the hard-right publisher's grey, glowering head. "Leftists need comfort at times like these," the website crows as it offers three spinners for the low, low price of $21.46. "Gift them this pacifying item that will give them something to do in between pulling down monuments."

The orange spinner has a Breitbart logo on one side and a picture of Bannon's face with the hashtag "War" on the other. While clearly intended as somewhat of a joke, there is an unmistakable air of desperation that comes along with the stress-busting toys.

It seems that, in order to achieve its goal of making Bannon into a cult hero, Breitbart has chosen a product that is not tacky and cheap-looking (not that this is inconsistent with the Trump aesthetic), but doesn't really have much of a demographic to which it can be marketed, either.

Millennials are close to over with the spinner fad, while older Breitbart readers aren't even going to get the joke. If the spinners do sell, it will only be because Breitbart has built up a sizable fanbase of dittoheads who will jump at the chance to do anything that they imagine might upset libtards, buying toys included. It's an irrational enthusiasm both Breitbart and Alex Jones have tapped for revenue in a rampantly cynical manner.

Of course, liberals themselves just won't care. Spin away, chuckleheads.