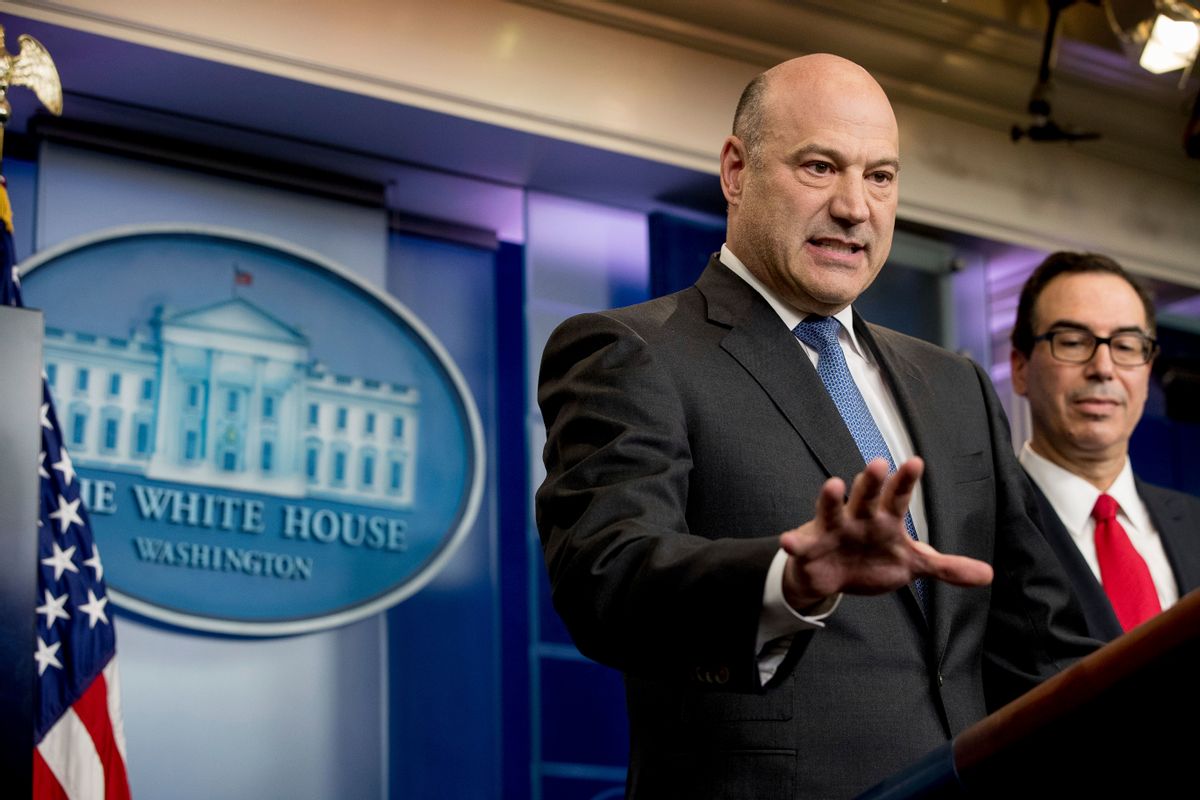 Gary Cohn, the former Goldman Sachs executive who is now President Donald Trump's top economic adviser, criticized his boss in an interview with the Financial Times for not doing enough to condemn white nationalist groups. He did not, however, mention the president specifically.

"I believe this administration can and must do better in consistently and unequivocally condemning these groups and do everything we can to heal the deep divisions that exist in our communities," he told the paper's editors in an interview that was published Friday.

He also explicitly argued against Trump's repeated insistence that people who were protesting against fascists were somehow similar to them. "Citizens standing up for equality and freedom can never be equated with white supremacists, neo-Nazis, and the KKK," he said.

According to Cohn, he has "come under enormous pressure" to resign from the Trump administration.

"As a patriotic American, I am reluctant to leave my post as director of the National Economic Council because I feel a duty to fulfill my commitment to work on behalf of the American people," he said.

Cohn also said he was sticking with Trump because he did not want anti-Semitic people to have a victory with his departure.

"As a Jewish American, I will not allow neo-Nazis ranting 'Jews will not replace us' to cause this Jew to leave his job," he said.

Trump has yet to respond to Cohn. Considering how willing he has been to lash out at the "beleaguered" Attorney General Jeff Sessions and Republican congressional leaders for not delivering immediate obedience to his desires, perhaps we should be expecting a tweet or two in the near future.

Breitbart News, the website of former Trump adviser Steve Bannon, has already lashed out at Cohn for his remarks, making them the top story and surrounding Cohn's first name with globe emoji characters. During his time in the White House, Bannon frequently clashed with Cohn and others who have urged more conventional Republican policies such as tax cuts, granting citizenship to illegal immigrants, and a pursuing a militaristic foreign policy. Bannon and his allies have derided these policies as "globalist," hence the icon.

On Thursday, before Cohn's interview was published, the New York Post printed a column from an editor denouncing "the obscene effort to shame 'Trump’s Jews.'" While quotation marks were placed around the phrase "Trump's Jews," there was no attribution.

"The idea we haven’t protested is bonkers, but more important, the left’s campaign to get all Jews to publicly denounce Trump has taken a profoundly dangerous and ugly turn. And it needs to stop," opinion editor Seth Mandel wrote.

Over on the conservative website Townhall.com, the commenters overwhelmingly are defending Trump against Cohn and criticizing Republicans for not supporting him sufficiently.

"Gawd! Will Reps never learn?" the most popular comment on the site reads. "The left comes along and slashes 'our communities' and then demands we 'heal' it. And our milquetoasts prostrate themselves every time in an effort to appease the left."

"It's plain to see that Both sides were to blame for the violence," wrote another popular commenter. "I'm glad to see we've got a President who isn't afraid to say that."

Those sentiments were echoed by readers of Free Republic, a conservative forum site.

"What a loser. This guy should be fired just for spending more than two seconds of his time pretending that neo-Nazis and white supremacists are among the 500 biggest problems most Americans are facing," wrote one member.