A DACA recipient's mission to help other Dreamers

Manny Villarreal has spent his life pursuing the American dream. Now he wants others to have that chance 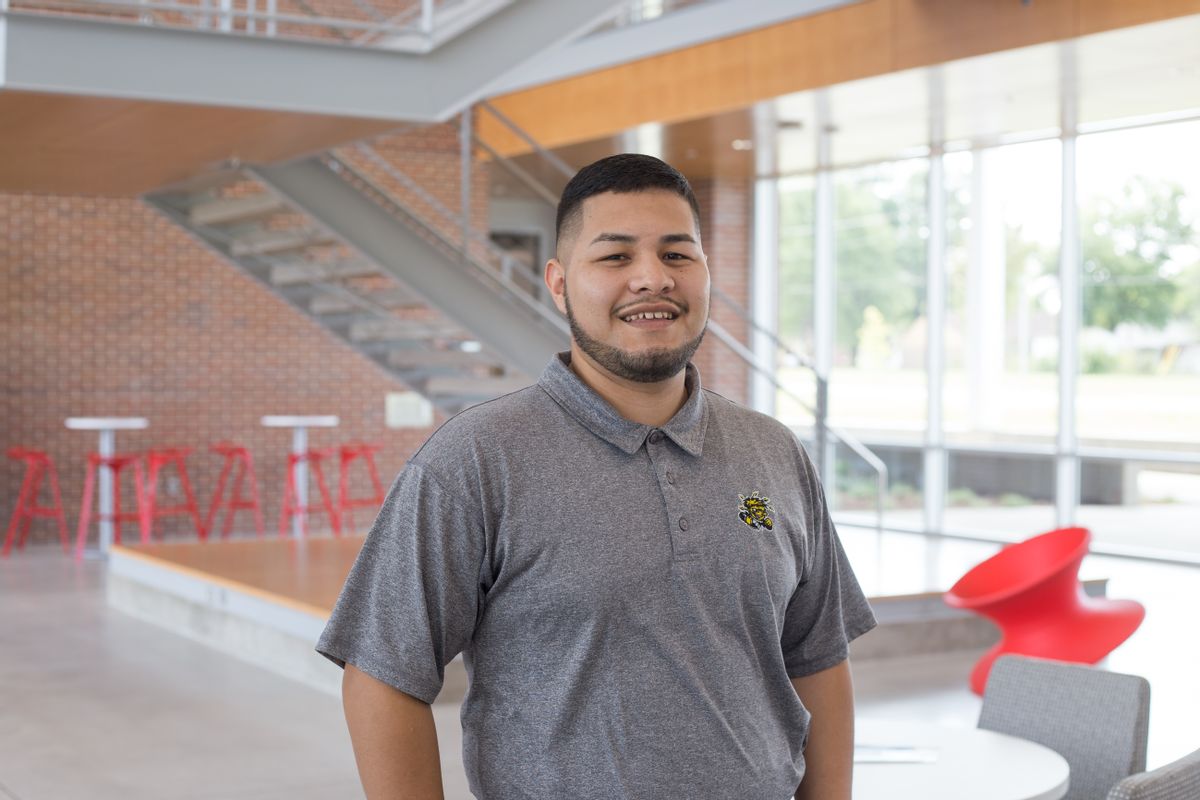 Manny Villarreal is known among those at Wichita State University for being as actively involved on campus as possible and for his mentoring of and advocating for DACA recipients like himself.

Villarreal was born in Guadalupe Victoria in Durango, Mexico and brought to Kansas on a travel visa when he was four. But his Kansas-community ties began long before that, with his grandparents: his grandfather worked for Boeing, while his grandmother worked for St. Francis Hospital during the 1970s.

For Villarreal, Kansas is home.

“I didn’t feel the full effect of being undocumented until I was a senior in high school,” he said. “I was limited on the things I could do and not do. I always knew the barrier on traveling, but when college came around, I didn’t know I couldn’t apply for most scholarships, and some other states didn’t allow undocumented students to go to college.”

He decided to attend Butler County Community College, after being awarded enough scholarships to cover tuition. While there, he earned two associate degrees as well as enrolled in the DACA program before transferring to Wichita State University.

“The week Donald Trump got elected, I was driving on the highway and the people inside the car next me started following me and screaming ‘Trump, Trump, Trump’ at me,” Villarreal said. “I didn’t necessarily feel scared for my life, but it made me scared of the changes that were going to start happening.”

The program — implemented in 2012 under the Obama administration — provided 800,000 undocumented immigrants, brought to the U.S. as children, work authorization and other benefits. The current administration has initiated a wind-down process of the program and has given Congress a six-month grace period to decide whether to protect DACA recipients, or "Dreamers,” from deportation.

Everyone who knows Villarreal speaks highly of him. Crystal Abasolo, one of Villarreal’s high school teachers, described Manny as a motivated and determined student.

“Manny came from a underprivileged home, but he was very determined to change that for himself,” Abasolo said.

“I literally googled ‘highest paying job,’ because my parents sacrificed a lot for me. If I’m going to do something, I’m going to go as far and beyond as I can,” Villarreal said. “I feel motivated to pursue something that one day I can give back to my children. I want my kids to feel proud that their dad is an engineer.”

Manira Rani, one of the Villarreal’s first engineering instructors at Wichita State, said that Manny brightens her classroom.

“I’ve known Manny since 2015 when he first took a class from me,” Rani said. “In the classroom, he’s really good — he participates, he’s helpful to his peers and he makes the class fun.”

Alicia Martinez Newell, Director of Engineering Student Engagement, asked him to be a peer mentor to first year engineering students after she noticed his volunteer work with the Society of Hispanic Professional Engineers and the Hispanic American Leadership Organization.

“One of the things I saw in Manny was that he was really engaged in everything he became involved in, and I saw that he had that natural leadership ability within his character,” said Newell. “He does a phenomenal job mentoring students, especially those who are first generation and underrepresented.”

One of Villarreal’s specific mentoring goals is to reach out to DACA students who may be struggling.

“I talk to DACA students that feel that they're in the shadows, who have no one to look up to. I want people to see that I was undocumented, and I struggled and have reached my goals. I want undocumented students to see me and realize that this is something that they can overcome,” said Villarreal.

Joshua Villa, a longtime friend and fraternity brother of Villarreal, has seen that mentoring and hard work first hand.

“Manny mentors anyone that he can talk to – incoming freshman, transfer students – any chance he gets to share his experiences, the do's and don'ts of college and ways to improve as a university,” said Villa. “He’s a hard worker, he has a great GPA, he’s constantly busy with classes and work but still finds time to sit down and talk to people.”

It has not always been easy for Villarreal. He describes feeling like he is occasionally caught between two worlds.

“I feel stuck sometimes. There’s sometimes I want to focus on my own culture, but in reality, the more I know about my own culture the less valued I feel here in the U.S., ” Villarreal said.

That feeling compounded when Villarreal married his long time girlfriend, Andrea, last year. The two had known each other since middle school and started dating in high school.

“People are always going to think that he’s using me, but I pushed him to get married. We started dating when we were 15 years old, and it’s really sad that people view the negative and try to water down the love that we have,” said Andrea Villarreal.

Even though Villarreal is now a legal resident, he is still passionate about defending DACA and helping DACA students. He was one of about 50 people who attended a DACA Solidarity Rally held at Wichita State on September 12.

“For the majority of us Dreamers, our parents struggled and sacrificed a lot to get us here, but we didn’t have a choice to come here or not,” said Villarreal. “At the end of the day, America is the only country we’ve ever known. DACA students want to work, go to college, better themselves and make America better.”