Remembering the Playboy founder's life, as told in Salon 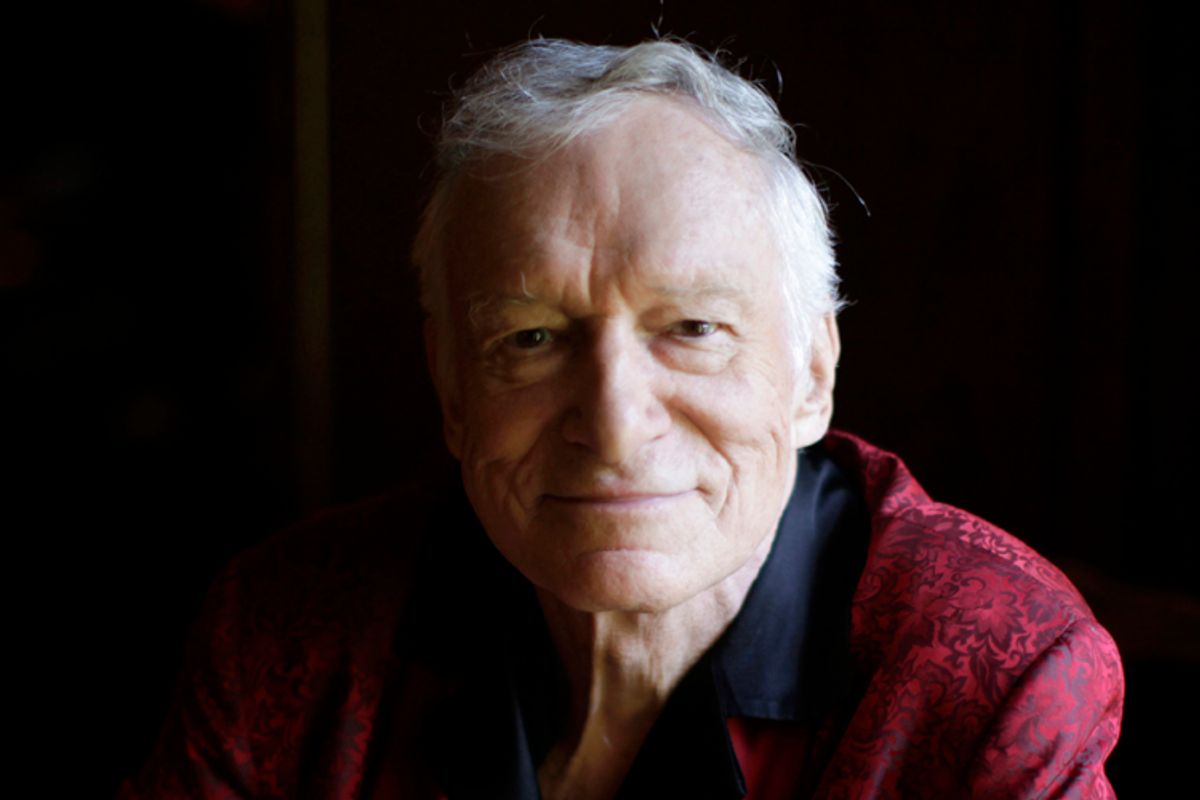 Hugh Hefner, an icon of a bygone era who founded Playboy — a magazine that was deeply embedded in American cultural lore — is dead at 91.

The founder, who created the magazine in 1953, died of natural causes in his home, according to The Hollywood Reporter.

In 2010, Salon's Andrew O'Hehir explored the roots of Playboy and what made the magazine such a cultural landmark.
"Hefner's near-naked pictures were revolutionary in the '50s, no doubt about it — but in a specific and limited way. There was no subjectivity to those girls, who were lovely in an almost identical style. Like they used to say about Miss America, Miss October was "the symbol of all we possess." You, the reader, were of course supposed to be the bon vivant who had so impressed this young lady that she was now, for some reason, standing in the empty bathtub wearing only a fuzzy cardigan and high heels. And just to prove — to her? to yourself? — that you weren't some small-minded creep only interested in what happened between the sheets, she came wrapped in 18,000 words by Norman Mailer, or a conversation between Alex Haley and Malcolm X. . ."

"Although the concept of branding hadn't really been invented when Hefner launched Playboy in 1953, he created one of the most potent brands in the history of media, one that dramatically reshaped Americans' ideas about sex, men and women. . . He hitched that brand to a wide variety of social issues and causes, from racial integration to freedom of expression to antiwar activism to repealing antediluvian sex laws to contraception and abortion. His philosophical convictions and literary interests were completely genuine, and whatever criticism one may have of Hefner's sexual politics on a symbolic level, he has been a lifelong supporter of full legal equality for women and gay people. (Along with a universe of female partners that outnumbers the sands upon the Red Sea shore, Hefner has admitted to some same-sex experimentation.)"

In 1999, Salon looked at what made Hefner tick.

"In 1953, creating Playboy was scarcely a stretch for Hefner: In high school he'd written an essay criticizing the lack of frank discussion about sex in America, and in his college newspaper he'd praised the recently released and controversial "Sexual Behavior in the Human Male," aka the Kinsey Report. The real stretch was for the rest of the country. Never before had nude pictures been successfully sent through the mail as a mainstream commercial venture. Indeed, the Marilyn Monroe photos, which appeared in Playboy's first issue, had existed long before Hefner got his hands on them, but nobody had dared challenge the powerful U.S. Post Office and its anti-obscenity regulations. Hefner went ahead with his plans, visiting newsstands throughout Chicago on the day the magazine went on sale, to monitor progress. Fifty thousand issues sold nationwide — more than he ever thought possible."

"Playboy magazine created the Playboy lifestyle, complete with the Playboy Club — a palace of swank for the celebrities and culturally sophisticated. Earlier this month, Mary Beth Evans, daughter of a former Playboy employee, explained what it was like entering the den of the bunnies."

"In Connecticut, my dad told us censored versions of his weekends at Hugh Hefner's Playboy Mansion — hanging out with models and swimming with movie stars like James Caan in the famed grotto. He brought us back loads of knickknacks, like Playboy golf clubs. Unlike my straight-A brainiac of a sister, who seemed to have a "take it or leave it" attitude, I yearned to be a cigar-cigarette girl or a cocktail waitress."

But there was a dark side to Hefner's life and reign as robe-toting king of the Playboy Mansion's castle. A 2015 memoir by Holly Madison, one of Hefner's several live-in girlfriends, accused him of years' worth of emotional abuse.
Madison goes on to describe Hefner as "the manipulator" who "pitted [the women] against one another." She also claims the mogul offered her $3 million in his will in an effort to prevent her from leaving the mansion, but that she declined.