"Outlander" recap: "Of Lost Things" shows what a lady will do #ForTheD

As Claire keeps looking for her man, poor Jamie just can't keep the hungry lassies off of him 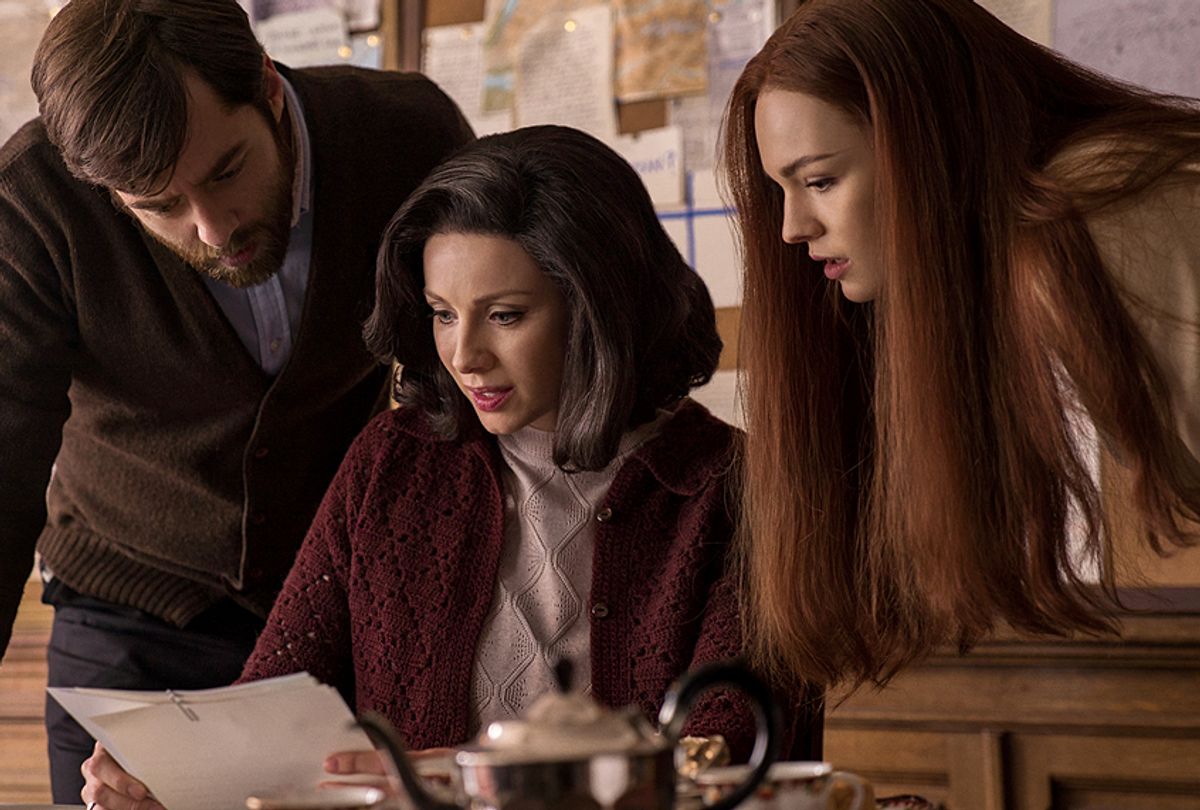 In case you’re not up to speed with regard to social media memes, recently Twitter users have been enjoying the #ForTheDChallenge. “Prithee tell me, scrivener,” you may be asking, “what is this ribald game of which you speak?”

Well, it involves people posting videos of raps, some improvised, enumerating all the things they’d do “for the d—k.” Other hip-hop bards have contributed tasteful odes to a woman’s naughty bits in the #ForThePChallenge. Coincidentally reflective of current events, “Outlander” gave us an entire hour depicting the great lengths to which an 18th century woman would go #ForTheD, in an episode called “Of Lost Things.”

Before you take offense at this, “Outlander” fans, let’s be real for a moment. See, many of you profess to love the period elements of the show while also taking vicarious joy in the endless, impossibly true love Claire and Jamie share. I believe you. After all, and I say this with zero sarcasm, some Playboy subscribers really are in it for the articles. Intellectual stimulation and sensual arousal aren’t necessarily mutually exclusive enterprises.

The #ForTheDChallenge differs from this, of course, in that it satirizes objectification — satire being one of the main reasons Twitter exists — while inviting men and women to extemporize about carnal wanting without shame. Shocking entertainment, yes, but it’s also somewhat empowering. Hip hop artists Cardi B and Erykah Badu have participated in the challenge, as have Issa Rae and actress Regina Hall.

“Outlander” understands the complexity of female yearning in ways that a preponderance of television series and films do not. If viewers idealize what Claire and Jamie feel for one another, it is because so few dramas have bothered to do this with their relationships as consciously and thoughtfully.

But it also serves its mostly female viewership by artistically crafting soft-core visuals. Owing to this, Starz’s drama frequently gets short shrift for embracing the tools of an old-fashioned bodice-ripper. The narrative gallops into this territory in this episode, and that’s fine. We’re due for some refreshment.

Until now, season 3 has been a tragedy, what with Claire (Caitriona Balfe) and Frank (Tobias Menzies) flailing in the purgatory of a moribund marriage as Jamie (Sam Heughan) crawls through a gauntlet of the lowest low points a man can face: Nearly dying from a battle wound only to be found by enemy soldiers, then narrowly escaping execution only to hide for six years in a cave as a fugitive. After that, prison.

Meanwhile, Frank is . . . was . . . a good loving man. But some of y’all have been like, “Rah-bah-bah ENOUGH with dusty ass Frank! BOO! Get Jamie back into the picture. Damn!”

Truly it is a crime to keep such a handsome Highlander in the cold storage of celibacy, even if Jamie’s stubborn determination to keep his body to himself speaks well of his abiding loyalty to Claire.

Folks also have naughty fantasies about this hunk of lorne sausage, though. Ardsmuir Prison’s final governor, Major John William Grey (David Berry) would like nothing more than to be the jam and clotted cream on Jamie’s scone, but alas, his feelings cannot be requited. Plus, John, a man of honor, wants more from Jamie than just sex. Thus, when the prison closes, Lord Grey ships the rest of the convicts off to America to serve out terms of indentured servitude but drops Jamie at the estate of Lord Dunsany. And it is here, in these great halls, where fate sees fit to throw another English flower at Jamie’s bone. #ForTheD!

There comes a point within all television series when episodes begin to encompass what is best about the show while opening the door to parody in a single pass. “Of Lost Things” stands as such an hour, in that it forwards Jamie’s side of the tale in a meaningful way while, 200 years in the future, Claire hits a wall in her quest to find him in time.

The episode begins in Scotland 1968, where Claire, her daughter Brianna (Sophie Skelton) and their friend Roger (Richard Rankin) are searching for Jamie’s whereabouts using historical documents. Eventually they find his name in the records for Ardsmuir Prison. But when the rolls indicate its closure in 1756, they’re unable to pick up his trail. “Of Lost Things” returns to the trio throughout the hour, but all you really need to know is that Brianna starts to fall for Roger, Claire gets the pearls Jamie gave her as a wedding gift back from Fiona Graham (Iona Claire) and after coming up empty in the Scottish National Archives, a deflated Claire and Brianna fly back to the States. On to the meat course!

What they don’t know is that as of 1756, Jamie is living under an assumed name, Alex MacKenzie, in Helwater, England. There he works in the Dunsany estate's stables as a groom. The lady of the house, Louisa Dunsany (Beth Goddard), blames all Jacobite rebels for their role in Culloden because her son Gordon was killed there. Lord William (Rupert Vansittart) knows Jamie was a Jacobite soldier before Ardsmuir, but honors Lord Grey’s word and is moved by Jamie’s sympathy for his loss, especially since Jamie reveals he’s lost two children himself. (One is living quite happily in the future, but . . . anyway.)

Lord William tells his new Scottish servant to keep a low profile and his nose clean. And Jamie would be perfectly happy to do just that . . . if it weren’t for m’lord’s saucy daughter Geneva Dunsany (Hannah James), the sour older sister to the much sweeter, sensible and plainer looking Isobel Dunsany (Tanya Reynolds). Isobel may be the Jan to Geneva’s Marcia, except nobody likes Geneva. But Geneva takes a shine to Jamie, especially after she’s betrothed to Lord Ellesmere (James Cameron Stewart), a cranky old coot.

Now I supposed we can forgive Geneva's scheming given her circumstances. It will be nearly 231 years until noted Scottish poet and philosopher Sheena Easton would gift women such as Geneva with the foolproof pick-up line of, “Your face is jammin'/ your body's heck-a-slammin'/ if love is good/ let's get to rammin.'” Alas, in 1756, ladies like Geneva have no such weapons in their seduction arsenals. Plus, she only has one opportunity to get some on her terms before resigning herself to years of being drilled on the regular by Father Time.

Hence, she resorts to what British women of noble birth do best: blackmail. “I am damned if my maidenhead will be given to a depraved old goat!” she hisses to Jamie, before threatening to have him shipped back to prison and to arrange for the harassment of his family at Lallybroch. All #ForTheD!

Later that evening, an angry Jamie goes to his mistress’ chamber and angrily disrobes, and somewhat less angrily invites Geneva to watch him strip. He knows what he’s working with. When the virgin’s confident certainty vanishes, Jamie’s gentlemanly side kicks in. He pauses and reminds her that she doesn’t have to toss his caber, but Geneva then quietly insists, for reasons quite feminist: “I’m doing this for myself. I want my first time to be with someone like you.”

This is the moment that “Of Lost Things” becomes somewhat of a spiritual companion to “The Wedding,” regardless of the method by which the booty is procured. Jamie softens his attitude, tenderly takes his time so as not to hurt the lass, talks her through the ruckus and makes sure his extortioner is well satisfied.

Jamie puts it down so effectively, in fact, that Geneva professes her love when it’s over. But he lets her down gently by explaining the deceptive effects of afterglow, saying in so many words, “Look girl, this isn’t love. Love is when you give your heart and soul to a person, and they give theirs to you in return. Me, I just made your toes curl. The lesson here is, get you a side piece like me. Now if you’ll excuse me, I have some hooves to clean.”

Cut to a few months after the wedding when a very pregnant Geneva shows up to the Dunsany estate with her wrinkled sac of a spouse. Soon after, she does that classic thing and dies in childbirth, and Isobel confides to Jamie that Geneva told her that they slept together. She also shares that Geneva managed to stave off her elderly husband’s advances. Ergo the child, a boy, is Jamie’s, and the old man knows it.

Right on time, the aggrieved widower threatens to kill the newborn, but Jamie steps in and shoots the enraged man before he can stab his bairn. Everything works out for the best: The Dunsanys get a male heir to raise and don’t have to deal with a disagreeable in-law. And Jamie dodges having to be at the beck and call of a pre-Kardashian vixen.

The Dunsanys also offer Jamie his freedom for saving their grandson, who they name William, by arranging for Lord Ellesmere’s death to be ruled a suicide. Jamie declines, explaining he needs to remain in their employ to send money back to his family. Really, though, he wants to raise his boy.

Jamie stays in Helwater until 1764 when wee Willie, now the Earl of Ellesmere, starts to look like his biological father. So Jamie finds his friend Major Grey and asks him to raise William, offering Grey the opportunity to have his way with him in exchange.

The good Major is shocked (“My god, that I should live to hear such an offer!” the gobsmacked Grey blurts), but to his endless honor says no. See, he’s not in it #ForTheD. He wants Jamie’s affection, which Jamie cannot give. In turn, he tells Jamie he’s going to marry Isobel (but certainly not #ForTheP) and assures him he’ll make her an adequate husband and do right by her. That’s good enough for Jamie, who pledges his eternal friendship to Major Grey and knows that Willie will be cared for.

Soon after saying his goodbyes (and unofficially baptizing his son as William James), Jamie grimly rides for Scotland, as the son who doesn’t know Jamie is his father cries out for him mournfully. All in all a satisfactory episode that nevertheless denies satisfaction to our hero. That tends to be the lot of a man dedicated to a single purpose, the totality of which can never be captured in a pithy hashtag.