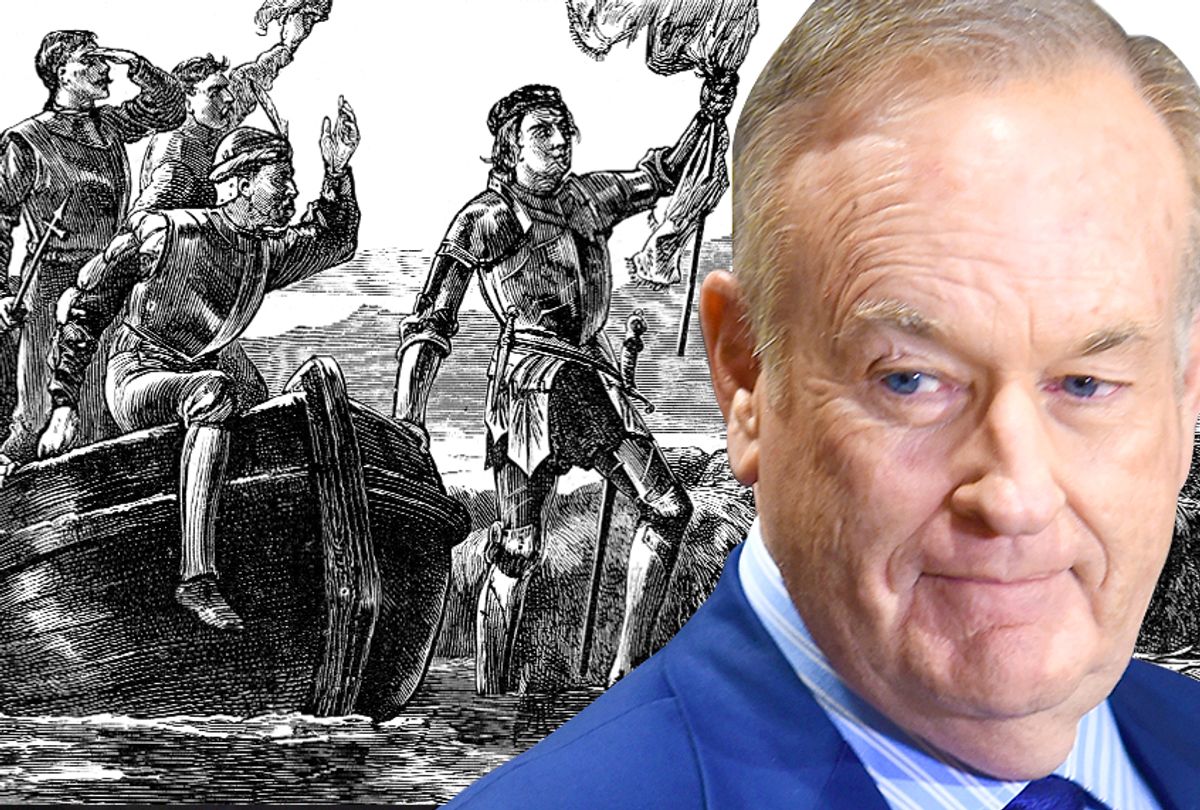 Columbus Day is one of those annual events when pundits take their worst takes out of storage. Bill O'Reilly is just one such pundit.

Because trying to justify celebrating a man who led to the genocide of Native Americans is a popular sport among conservatives — as well as Christopher Columbus' descendants — Bill O'Reilly wants to tell you why it's actually wrong to be skeptical of the man.

"I am almost certain that the L.A. Board of Supervisors do not know that Chris never set foot on what is now mainland USA," O'Reilly wrote in the Hill, not realizing that Columbus not stepping foot on the United States is a very good reason why we should ignore the man completely. "Nope, the closest Columbus got was Cuba."

Which brings us to O'Reilly's second point: Columbus was actually very bad at navigating — you know, that thing that we're praising him for.

For the record, Columbus made four voyages across the Atlantic between 1492 and 1504. He was looking for a route to Asia so he could buy spices at a discount or something.

But Chris kept running into various Caribbean islands, also the formidable obstacles of South and Central America. There was no passage to the Far East, only an endless drifting around.

Two paragraphs later, O'Reilly called Columbus a "brilliant navigator," who was apparently so great he never found the place he kept searching for. Indeed, the only reason Columbus felt finding a route to Asia was even possible via the Atlantic was because he thought the globe was roughly half the size it actually is. By his day, most navigators and scientists had figured out its correct measurements.

Of course, people don't protest Columbus because he missed his destination by half the earth's circumference. They protest him because he rounded up slaves and set off — intentionally or not — one of the greatest genocides in human history. Famously, Columbus would enlist natives to round up gold for him. If they missed their quotas, he would have their hands cut off.

To O'Reilly, that deserves a shrug, a hand wave, and a false equivalency:

Along the way, Columbus ran into some Indian tribes, most notably the Caribes. They did not like Chris and his malodorous European crews. Strife broke out and some bad stuff went down on both sides.

On the island of Hispaniola, present day Haiti and the Dominican Republic, Columbus did establish slavery to support various laborious enterprises. Not good. Slave labor was common at the time the world over, but that's no excuse.

So the next time that O'Reilly wants to demonize someone with whom he disagrees, it's worthwhile to throw up this little nugget that he used to describe Columbus: "Every person on the planet has done bad things, but it is the totality of a human being that should be the litmus test."

An O'Reilly historical revision isn't complete without a lot of victim blaming and a hint of racial undertones. "Yes, some native tribes were enlightened societies but many were not," he wrote. "After inter-indigenous battles, torture and enslavement were often on the menu for the losers." It's surprising that O'Reilly would say that slavery was a bad thing.

So why should a failed navigator who ruled over a slave state be celebrated in the United States, a place he never visited in his lifetime? Well, it might just be because that's what he learned in school and he wants to keep it that way. It's not about history, it's about keeping the myth alive.

"We now live in a time where severely misguided people with little frame of reference are dictating how history should be told and what Americans have a right to see and hear," O'Reilly wrote. "And if you disagree with them, then you, yourself, are 'oppressive.' And they'll cover up your statue."

Probably not the best time to be planning an O'Reilly statue anytime soon.