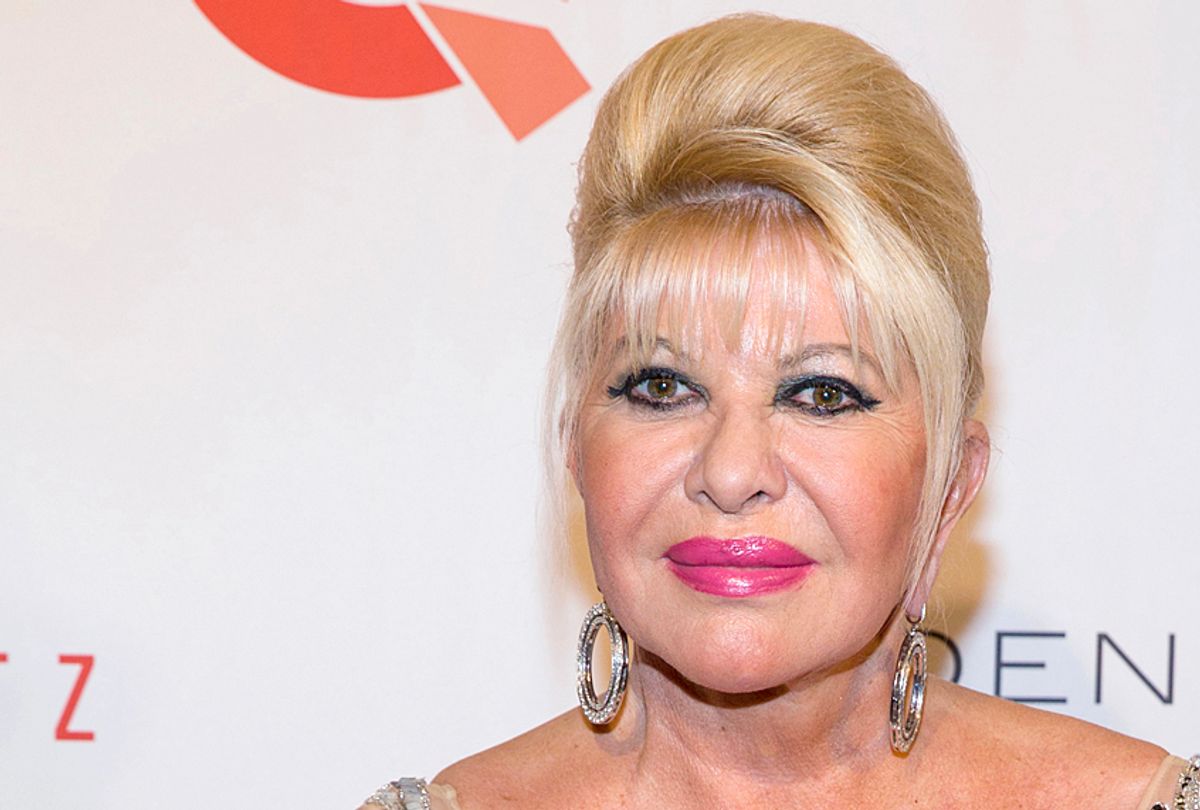 We already knew that the Trump administration is perhaps the pettiest group of individuals to ever hold sway over the executive branch.

President Trump himself has offered a steady stream of digs at the media and celebrities who speak critically of him, and just yesterday Vice President Mike Pence made a planned and potentially costly exit at a football game because he doesn’t agree with the NFL protests. This comes on top of all the private jet scandals, cases which just show how low, greedy and frankly unimaginative these people are. Even their notion of graft is pretty bargain basement.

But by no means is this pettiness circumscribed by the grounds of the White House. The sphere of Trump's pettiness is wide. For proof, just look to Trump’s first wife — his ex-wife — Ivana, who is pointlessly and perhaps facetiously vying with Melania for the title of “First Lady.”

Ivana was on ABC’s Good Morning America on Monday morning to market her new book, “Raising Trump.” In the interview, she took shots at Melania and the president’s second wife, Marla Maples.

“I have the direct number to the White House, but I don’t really want to call him there because Melania is there and I don’t want to cause any kind of jealousy or something like that, because I’m basically first Trump wife, okay,” Ivana said, laughing. “I’m first lady, okay?”

Ivana took another shot when ABC’s Amy Robach pressed about Marla Maples, responding: “Well, I don’t want to talk about a showgirl.” She apparently only referred to Maples as “showgirl” throughout her entire book.

Now, these are jokes. Petty jokes to be sure, but just jokes from a woman who legitimately has an axe to grind with her former philandering spouse. It's Page Six stuff any serious person should have ignored.

But Melania Trump did not ignore Ivana's comments, despite the clear fact that there’s no purpose in arguing who is First Lady outside of low-grade personal point scoring. But, Melania is Donald Trump's wife. Melania is part of the Trump White House. So, of course, Melania clapped back.

Through her spokeswoman Stephanie Grisham, the first lady of the United States released a statement that read:

Mrs. Trump has made the White House a home for Barron and the President. She loves living in Washington, DC, and is honored by her role as first lady of the United States. She plans to use her title and role to help children, not sell books. There is clearly no substance to this statement from an ex, this is unfortunately only attention-seeking and self-serving noise.

While she slams her predecessor for "attention-seeking," the first lady's response is even more so, having been written by a woman of such high national stature. She's turned a blip of a breaking story into grist for hot takes (pieces like this included), all because petty battles of this nature are the language Trump and his circle speak.

Now we rubberneck as two rich women who married an odious man snark at each other throughout media, in a pointless war over who truly has a grip on his scerlotic heart and who should be regarded America's wife. It's middle-school stuff and all of us — the president, his ex-wife, the first lady, the media and the readers — are stuck in the cafeteria.