By running a report that the Vegas shooter had an accomplice, Carlson gives credence to a false conspiracy theory 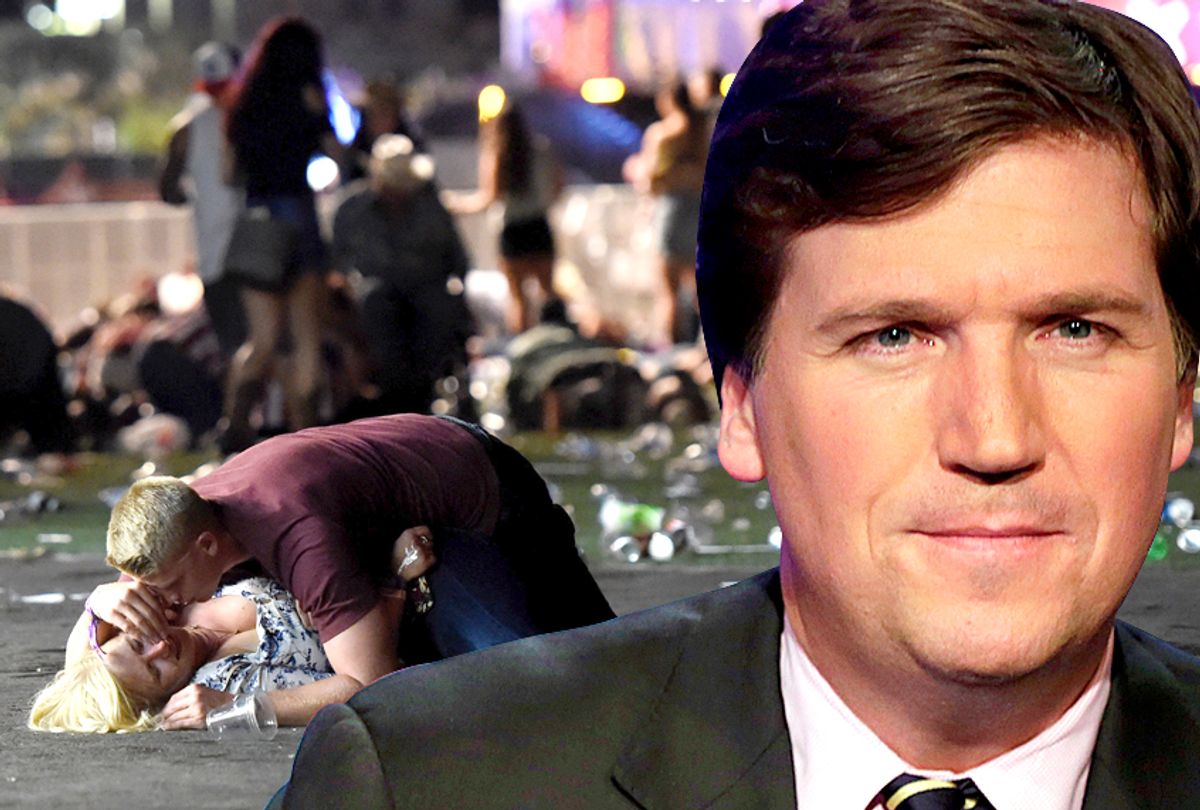 On the surface, it seems like a small thing: On his prime-time Fox News show last week, Tucker Carlson ran a clip of a report falsely claiming that the Las Vegas shooter, Stephen Paddock, might have had an accomplice. Carlson's guest, Nevada Attorney General Adam Laxalt, corrected the misinformation and Carlson moved on. It's easy to assume it was an innocent mistake. Unfortunately, there's also good reason to worry that something more sinister was involved in Carlson and his team allowing such a preposterous untruth to reach their broadcast. It just so happens that this apparent mistake feeds a rapidly forming right-wing conspiracy theory holding that the Las Vegas shooting is a "false flag" operation.

Media Matters has the details. Before Carlson cut to Laxalt, he rolled a clip of Fox reporter Trace Gallagher saying, "The Clark County sheriff has gone on the record saying that he believes Stephen Paddock did have an accomplice in all this. He said he would be Superman if he did not have an accomplice, and pulled this off on his own."

"You know, the sheriff did not say there was any evidence of an accomplice," Laxalt said when Carlson introduced him. "I think he was expressing what we all feel, which is, it’s hard to believe that a crime of this magnitude could have been done by one person."

Paddock did act alone, as far as anyone knows to this point. But the idea that he had an accomplice is part of a larger conspiracy theory, promoted by Alex Jones and others, arguing that this shooting is part of some elaborate plot,  supposedly run by "deep state" leftists and Islamists and aimed at undermining Donald Trump. Conspiracy theorists cling to the idea of Paddock's apparently fictional accomplice as evidence of this conspiracy, the idea being that if there's a second guy that authorities know about but are concealing from the public, that is proof of some larger conspiracy.

It could, of course, be a really unfortunate coincidence that a bit of false information that appears to validate this conspiracy theory ended up on Carlson's show. There's good reason to be suspicious. Carlson, since he got the prime-time spot, has surpassed Sean Hannity as Fox News' biggest mainstreamer of ideas that lurk on the fringes of the far right. As I've written before, Carlson takes a lot of themes and ideas from white supremacist circles, cleans them up a bit, and passes them off as mainstream conservative talking points. There's a lot of overlap between the white supremacist crowd and the conspiracy theorists who rant about "false flags" every time there's a mass shooting in America. So it's really no surprise to see a subtle validating nod to the conspiracy theorists pushed out on Carlson's show.

Another reason to believe this wasn't an innocent error is that other pundits who straddle the space between fringe and mainstream conservatism are also trying mightily to mainstream this conspiracy theory. As Media Matters also reported, Matt Drudge, Laura Ingraham and Rush Limbaugh have all hinted that the Las Vegas shooting just might be a conspiracy.

Carlson's show is popular with the far-right forces that often find the rest of Fox News too tame for their tastes. White supremacists on message boards repeatedly post about watching Carlson's show carefully for covert signs that he is one of them and, sadly, they find plenty of evidence. Both David Duke and the Daily Stormer have praised Carlson for working their ideas into his programming.

Having someone like Carlson validate this kind of conspiracy theory, even subtly and with plausible deniability, is incredibly dangerous. In fact, the subtlety of it makes it more dangerous. Conspiracy theorists tend to interpret these low-level signals as Carlson trying to smuggle his supportive views past the supposed censors who are trying to keep the "truth" from getting out.

Carlson has staked out some extremist territory on the Las Vegas shooting in general, trying to argue that Paddock's use of a bump-fire stock somehow saved lives and trying to make political hay over Democrats calling for gun control in the wake of the shooting.

Gallagher, the reporter who claimed that Paddock had an accomplice, has a history of engaging in conspiracy theories. Media Matters archives show that Gallagher has pushed the right-wing memes that the media covers up terrorist attacks, that voting machines turn Republican votes into Democratic votes, and that, if elected president, Hillary Clinton was planning to kill Julian Assange with a drone strike.

So, yeah, it could be an innocent mistake. But it probably wasn't. Winking at conspiracy theories like this is reckless and irresponsible behavior on Gallagher and Carlson's part. Many of the same people who rant online about the Las Vegas shooting also bought into the Pizzagate conspiracy theory that led to a man showing up at Comet Ping Pong with a gun and threatening the employees. These are the same kinds of people who harass the parents of victims of the Sandy Hook shooting, which conspiracy theorists also believe was a "false flag" operation involving actors. The Vegas conspiracy theorists are already arguing that the staff at the Mandalay Bay is in on the supposed conspiracy. There's a real danger that someone may harass or harm innocent people who work at the hotel.

Carlson has a reputation for being a bow-tied dork, but that's a useful illusion. The grim fact is that he has become an increasingly toxic influence on the current media landscape.