In an attempt to show off virtual reality, Facebook CEO Mark Zuckerberg used Puerto Rico as a backdrop 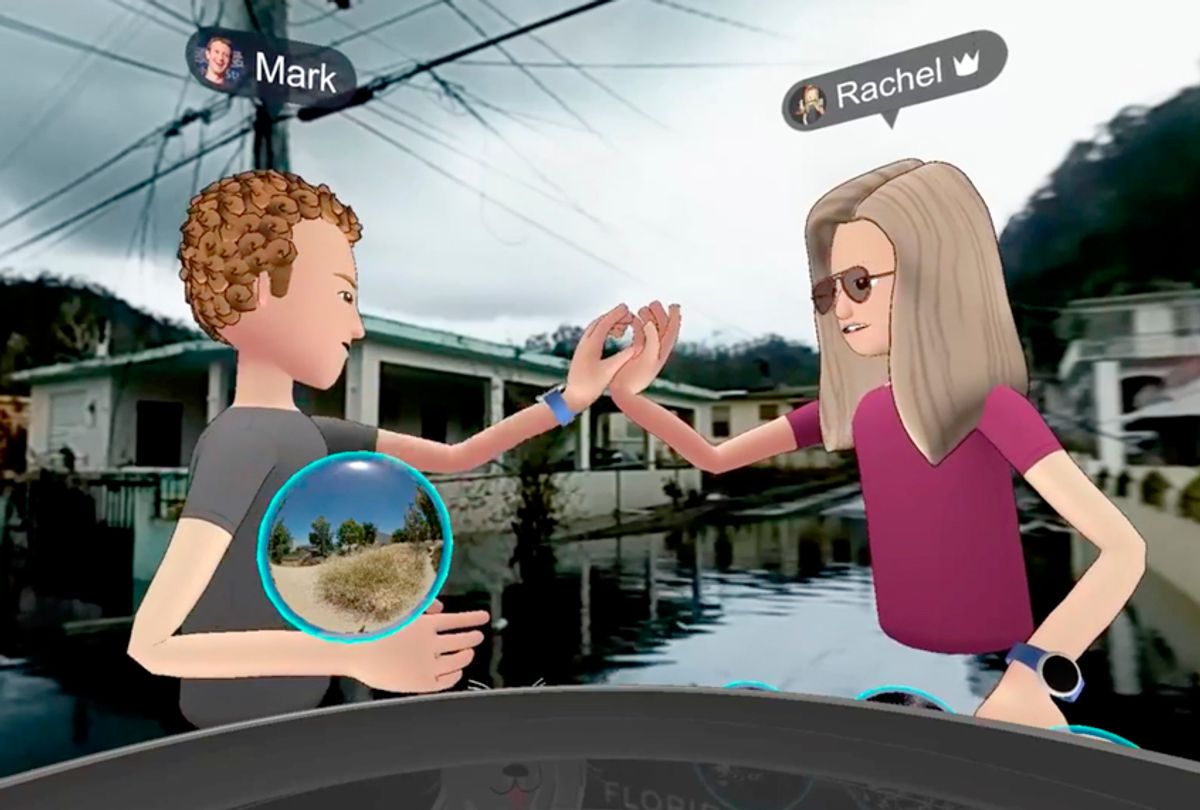 If Mark Zuckerberg wants to win over liberals and become president in 2020, he'll need to convince them that his PR gaffe trying to promote virtual reality by using Puerto Rico as a backdrop does not represent his core values.

In a Facebook Livestream on Monday, Zuckerberg and Rachel Franklin, Facebook's head of social virtual reality, appeared as cartoon avatars while they took viewers on a tour of various locations that they could visit with Spaces, their new "social virtual reality" tool, according to The Guardian. One such location was Puerto Rico in the aftermath of the devastation wrought by Hurricane Maria.

During that footage, the smiling avatars of Zuckerberg and Franklin can be seen wandering around the wrecked landscape with the same casual attitude as if it were just another background, like one of Zuckerberg's pet dog (which was also used as a background during the livestream). It's . . . odd.

"One of the things that’s really magical about VR is you can get the feeling you’re really in a place," said Zuckerberg while post-Maria Puerto Rico was in the background.

He added, "Rachel and I aren’t even in the same building in the physical world, but it feels like we’re in the same place and can make eye contact." The two then had a high five. “You can see that we can really feel like we’re here,” said Franklin.“This street is really flooded,” added Zuckerberg.

In addition to being a major PR gaffe for Facebook, Zuckerberg's cyber-tour of Puerto Rico could also hurt his rumored presidential ambitions. Although Zuckerberg does well against Trump in early polls, he has toured the country promoting the merits of a universal basic income — a distinctly left-wing idea, one that would presumably find favor among Bernie Sanders supporters — and it is unlikely they'll react well to perceived insensitivity toward the people of Puerto Rico.

"One of the most powerful features of VR is empathy," Zuckerberg wrote in a comment under the livestream on Tuesday. "My goal here was to show how VR can raise awareness and help us see what's happening in different parts of the world. I also wanted to share the news of our partnership with the Red Cross to help with the recovery." Indeed, Facebook has donated $1.5 million to relief efforts and has built “population maps” to help organizations determine where to send resources.

Still, the disconnect is obvious and jarring. "Reading some of the comments," said Zuckerberg, "I realize this wasn't clear, and I'm sorry to anyone this offended."