Whether it's health care, taxes, peace in the Middle East and much more, Trump still can't put two and two together 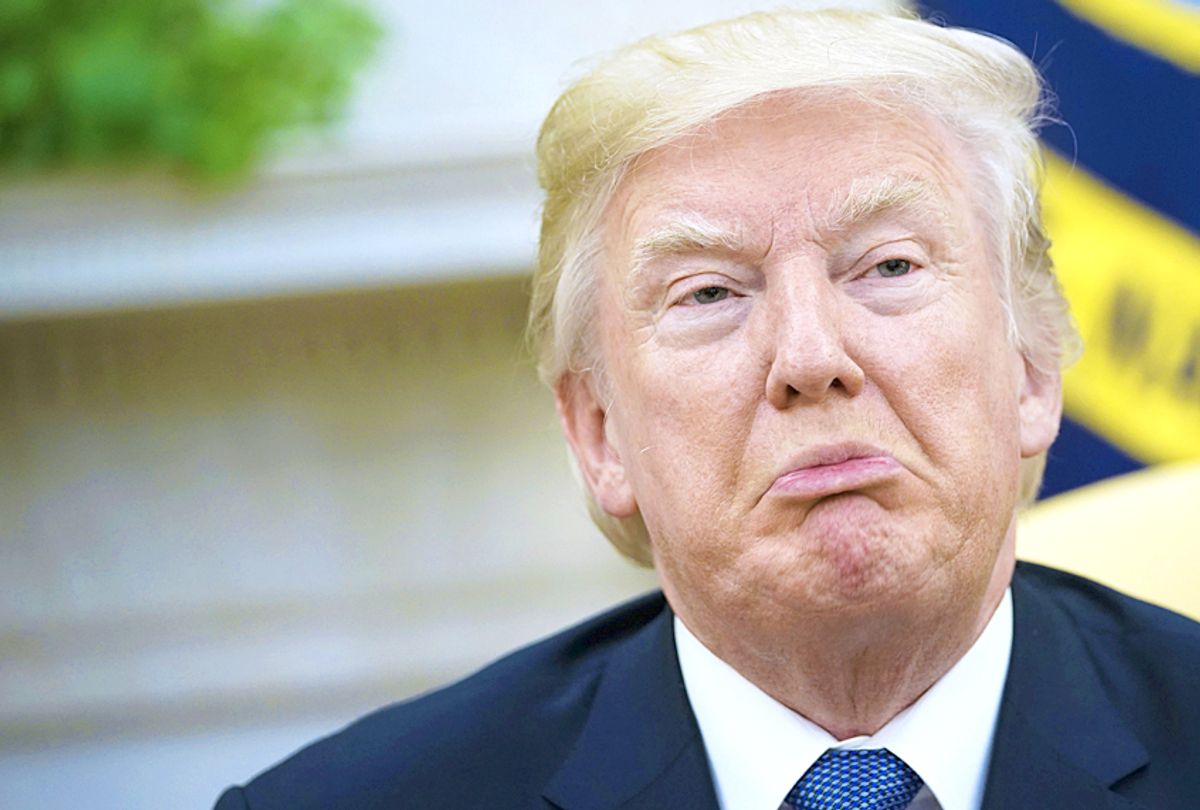 President Donald Trump suggested in a tweet Wednesday morning that NBC could (and should!) have its broadcasting license revoked because it reported a story which said the president wanted to dramatically increase the country's nuclear arsenal. Yes, Trump still knows nothing about how the government works.

"Fake @NBCNews made up a story that I wanted a ‘tenfold’ increase in our U.S. nuclear arsenal. Pure fiction, made up to demean. NBC = CNN!" Trump tweeted on Wednesday morning. "With all of the Fake News coming out of NBC and the Networks, at what point is it appropriate to challenge their License? Bad for country!" he added in a second tweet.

Fake @NBCNews made up a story that I wanted a "tenfold" increase in our U.S. nuclear arsenal. Pure fiction, made up to demean. NBC = CNN!

With all of the Fake News coming out of NBC and the Networks, at what point is it appropriate to challenge their License? Bad for country! — Donald J. Trump (@realDonaldTrump) October 11, 2017

It was only one week ago that White House Press Secretary Sarah Huckabee Sanders publicly proclaimed, "The president is an incredible advocate of the First Amendment."

"The President is an incredible advocate of the First Amendment” — White House press secretary, 1 week ago. https://t.co/uFRfrMJuI8

But even taking into account the eerily Nixonian tactics Trump referred to, he also proved once more that he still doesn't understand how this whole governing deal works. Simply put, there is absolutely no way that Trump can take a "license" away from NBC, because NBC doesn't actually have one.

Local residents or competitors can file a challenge to a station’s license renewal, but the basis for such a challenge is extremely limited — it must be a case where the station systematically violated the FCC’s rules or lacked the requisite “character” to hold the license. That is usually defined as a felony conviction, said Andrew Schwartzman, a communications lawyer with the Institute for Public Representation at Georgetown University Law Center.

This is hardly the first time Trump has demonstrated he is incapable of grasping the nuances of policy, let alone the very basic and clearly demarcated boundaries of his own power.

In February, following his long campaign of railing against Obamacare, the president said, "Nobody knew that health care could be so complicated." Just about everyone everywhere already knew that, yes, health care is a thorny bush of issues. He himself, apparently, did not until sometime after he attempted to torpedo one of the largest and most hotly contested pieces of legislation ever to pass through Congress.

Tasking his son-in-law and senior adviser Jared Kushner with the responsibility of brokering peace between Israel and Palestine, Trump said, "Let's see if we can find the solution. It's something that I think is frankly, maybe not as difficult as people have thought." The Palestinian situation has been regarded as perhaps the most difficult international issue outside of the Cold War over the last half century.

The president also conned his entire base into believing the middle class would see tax cuts. It is simply not the case. Trump also stated his tax plan would not benefit him or his wealthy friends, which certainly is the case.

Another hallmark of Trump's campaign was his bombastic rhetoric on immigration that has been completely void of fact. In reality, he has proposed binary and oversimplified so-called solutions. Oh, and Mexico paying for that wall was always and remains a non-starter.

Trump has exhibited even less knowledge when it comes to geopolitics. In April it was reported that he tried to cut a bilateral trade deal with Germany, only to be rejected by Chancellor Angela Merkel more than 10 times.

He has also repeatedly claimed that members of the NATO alliance must step up and "pay what they owe," even though a handful of nations have previously committed to contributing two percent of their GDP, and others have since pledged to contribute more funds. He never seemed to get that the U.S. has to, and will likely always have to, contribute more, because its GDP is substantially more than that of other member nations.

Lastly, Trump once cited his vast historical knowledge of America and asked, "But why was there the Civil War? Why could that one have not been worked out?" Indeed.

All of these above merely scratch the surface of Trump's civic, legal, bureaucratic and historical lack of understanding or reasoning. The fact that he took to Twitter again yesterday to post yet another example of his complete ignorance about how his job, his Executive Branch and government actually work just shows that he has not — and perhaps will not — come up to speed.

Whether all this is by will or incapacity doesn't truly matter. That he still sits at the Resolute Desk, does.