Observations from Haumea hint at the presence of a ring around the strange, egg-shaped dwarf planet 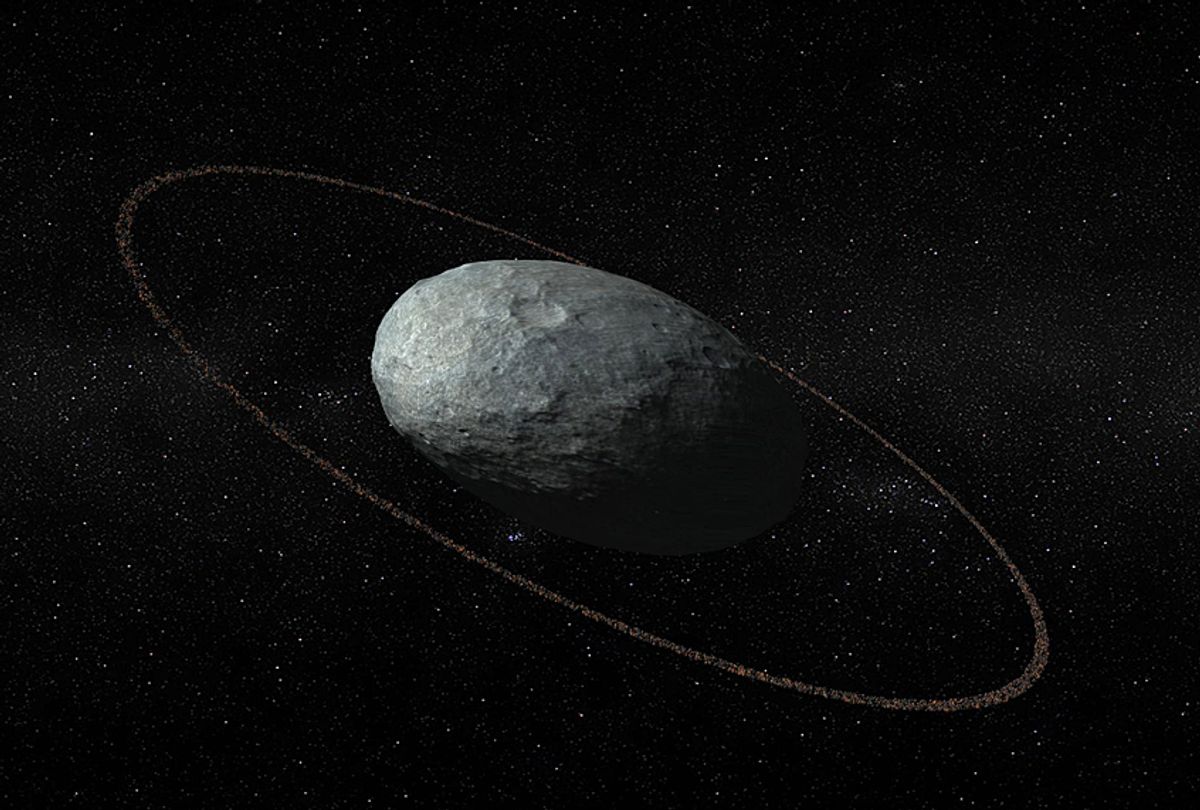 Artist concept of Haumea with the newly-discovered ring. (IAA-CSIC/UHU)
--

When we think of a ringed planet, most of us envision something akin to the intricate grooves of Saturn’s ring system, which have fascinated humans for centuries. Yet a recent astronomical observation seems to suggest that the distant dwarf planet Haumea, which possesses only about one-third the mass of Pluto, may have a ring as well.

Haven’t heard of Haumea before? That’s not too surprising: it was only discovered in 2004, and there are no direct images of it that look like more than a few low-resolution light blips in the sky. (The image used in this article is an "artist's conception"; if you want to see a grainy telescope image of Haumea and its moon Hi'iaka, click here.) As a dwarf planet, it’s not one of the solar system bodies taught to schoolchildren the way that the eight major planets are. (Other dwarf planets you may have heard of include Eris, Ceres, Quaoar, and, of course, Pluto, which the International Astronomical Union demoted to “dwarf” status to widespread popular objection.)

Haumea’s orbit around the sun is relatively elliptical, and situates it a bit beyond the orbit of Neptune, albeit at a much greater tilt than that planet; this puts it in a class of solar system objects known as “trans-Neptunians” in addition to being classified as a dwarf planet.

A letter published yesterday in Nature by a consortium of scientists led by José Luis Ortiz at the Institute of Astrophysics of Andalusia in Spain reported on the discovery, based on observational data, that Haumea harbors a thin, rocky ring system around 2300 kilometers from the center of mass of the dwarf planet.

Why are we only just discovering that Haumea has a ring? Well for one, it’s extremely hard to see, by virtue of being quite far away and pretty small, as mentioned. Astronomers had to wait for the dwarf planet to pass by a bright star (relative to Earth) in order to observe how Haumea blocked out the light from the star in the background. This kind of observation — of watching one body pass in front of another, usually brighter body — is known as occultation in the astronomy world, and is a fairly common method of inferring the mass, atmospheric density, and shape of astronomical objects. Indeed, in hunting for extrasolar planets, occultation is one excellent means of observing if nearby stars harbor their own planets.

Multiple ground-based telescopes all across Europe observed how the light from the star was dimmed as Haumea passed in front of it. A telltale dip in light preceding and following the occultation, at the same distance, revealed that Haumea likely had a ring.

This puts Haumea in a class of its own in terms of astronomical bodies with rings. In our solar system, most of the ringed planets are gas giants, not rocky planets. Earth is thought to have briefly had a ring, after a collision with a Mars-sized body, although that ring is believed to have eventually coalesced into the Moon. But a ring around a dwarf planet?

“Until a few years ago we only knew of the existence of rings around the giant planets; then, recently, our team discovered that two small bodies situated between Jupiter and Neptune, belonging to a group called centaurs, have dense rings around them, which came as a big surprise,” said Pablo Santos-Sanz, a member of the research team, in a press release. “Now we have discovered that bodies even farther away than the centaurs, bigger and with very different general characteristics, can also have rings,” he added.

“Different” is an apt description for Haumea: not only is it far away, cold, harbors two moons and has a ring, but it is also egg-shaped. Indeed, the occultation also provided the team with new data about just how elongated Haumea is.

“There are different possible explanations for the formation of the ring; it may have originated in a collision with another object, or in the dispersal of surface material due to the planet’s high rotational speed,” Ortiz said in the same press release.