When it comes to players taking a knee, the approval split is racial, partisan and based on age 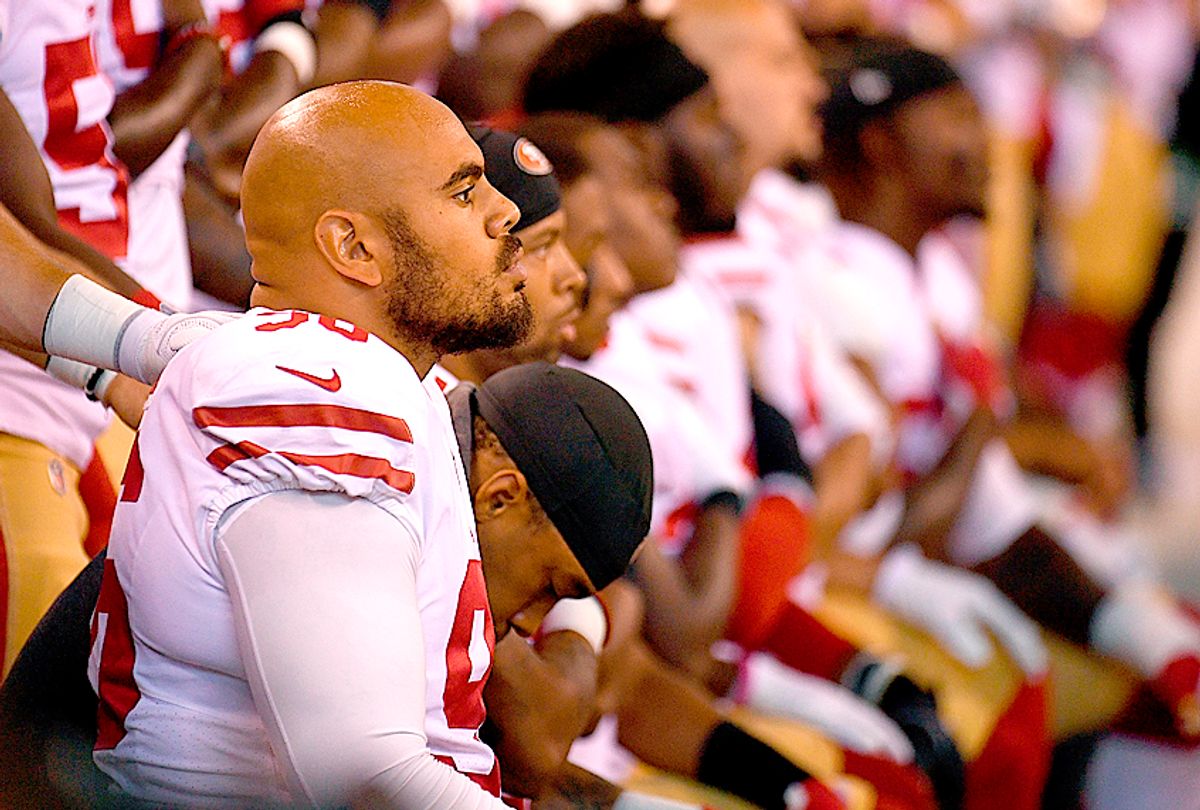 Speaking to Sean Hannity on Wednesday, President Donald Trump again took up the issue of NFL players kneeling during he signing of the national anthem in protest of police violence toward African Americans. Speaking about the player who started this series of protests, quarterback Colin Kaepernick, the president said, "Frankly the NFL should have suspended him for on game and he would have never done it again."

He continued, suggesting that a second kneeling offensive should merited a longer suspension and a third should have disqualified Kaepernick from playing the rest of the season. "You would never of had a problem," the president said adding the familiar refrain, "You can not disrespect our country, our flag our anthem, you can not do that."

Whether players can or cannot kneel, whether their actions constitute disrespect for the American flag and those who serve our country in the armed forces, whether forcing them to stand would be an abridgment of their rights to self expression have been spun up into an angry national debate about which nearly everyone has an opinion.

Now, a new survey by Quinnipiac University is telling us which Americans land on which side of the issue and, along with some expected results, there's also an enlightening surprise:  while there is an substantial racial split over whether one supports players taking a knee during the anthem, there is also a significant age discrepancy.

The survey said that voters 18 to 34 years old approve the anthem protests 66 to 27 percent, whereas voters over 65 disapprove 62 to 34 percent. This comes along with the more expected finding that black voters approve of the demonstrations  79 to 18 percent, while white voters disapprove 60 to 37 percent (hispanic voters are divided more evenly 46 to 45 percent). Men are less likely to support the protests, disapproving of them 57 to 39 percent with divided up the middle 48 to 48 percent. Overall, American voters disapprove of the NFL protests 52 to 43 percent.

While Quinnipiac discovered that the voters overall disapproved of NFL players taking a knee, that was not true when it came to President Donald Trump's remarks on the matter.

When it comes to requiring NFL players to stand — a sentiment Dallas Cowboys owner Jerry Jones professed and Goodell appears to be courting — Americans were also divided, according to a poll by CNN. Forty nine percent of pollers said yes, it should be required with 47 percent saying no.

CNN also found a profound difference in Americans' understanding of what the NFL protests signify. "While 46% say protesting during the anthem is disrespectful to the freedoms that the anthem represents, an almost equal 45% say such protests demonstrate those freedoms," CNN wrote.

NFL Commissioner Roger Goodell, released a statement to NFL teams Tuesday, declaring "everyone should stand" for the national anthem. Since then he has clarified those comments, walking them back to some extent and declaring that there is still ongoing conversation about what the league will and won't do.

Regardless, the broader cultural split over whether NFL protests are right or wrong has only widened and deepened, costing at least one private citizen unaffiliated with the league his job. In Goodell's letter to teams, he said that the NFL needs "to move past this controversy." As the above poll suggests, America is nowhere near ready to do that.