Rose McGowan roars back to Twitter, immediately drags it, Trump and Jeff Bezos

Once her 12-hour suspension was over, the actor and Weinstein accuser lit a bomb under the social media network 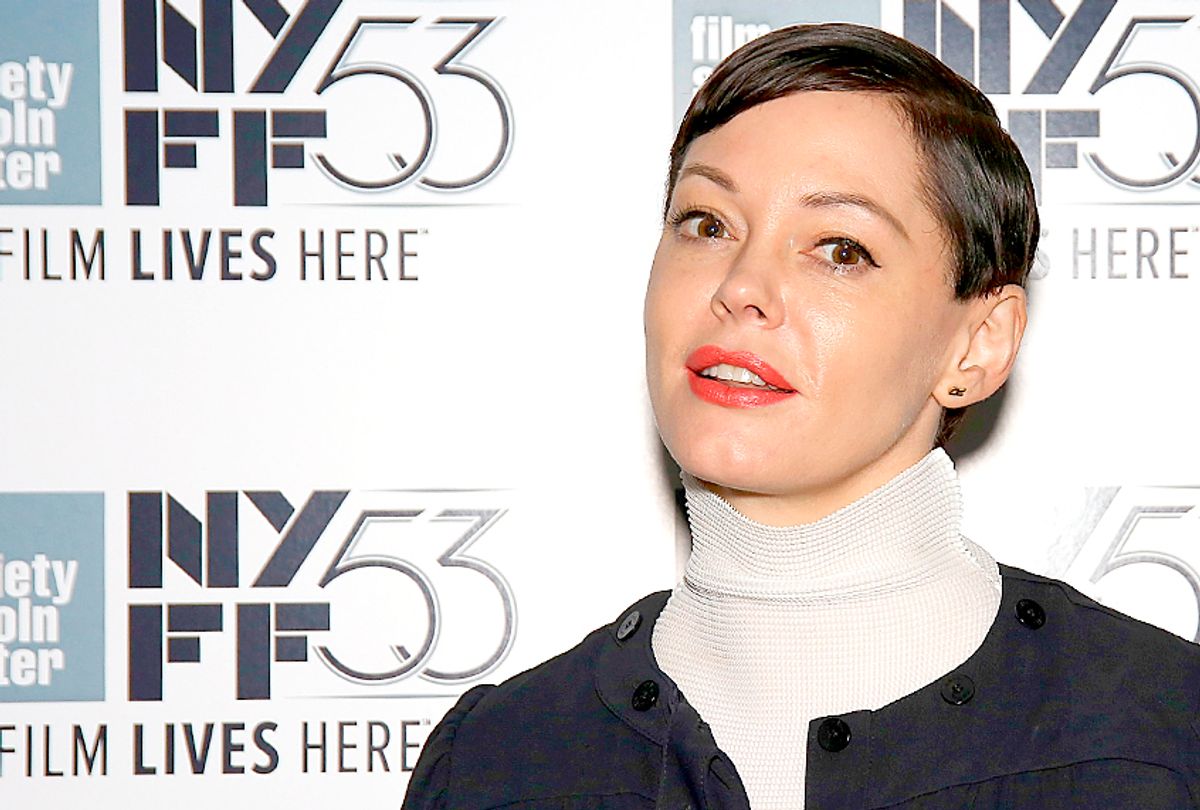 Twelve hours after being suspended by Twitter, actor Rose McGowan is back with heated, righteous fire. Initially, the social-media publishing platform had blocked her use of her account because, as its @TwitterSafety account says, "one of her Tweets included a private phone number, which violates our Terms of Service."

Indeed, McGowan had made public a private phone number when she revealed a series of texts that showed others in her professional circle knew about the alleged pattern of sexual abuse perpetrated by Harvey Weinstein and specifically her claims that he had raped her in a Park City, Utah Hotel during the Sundance Film Festival in 1997.

McGowan was 24 at the time and, according to The New York Times, reached a settlement with Weinstein's legal team to stop her from discussing the alleged assault. "The $100,000 settlement was 'not to be construed as an admission' by Mr. Weinstein, but intended to 'avoid litigation and buy peace,' according to the legal document," the Times wrote.

In the intervening years, McGowan made sideways references to the alleged incident, going so far as to note in 2016 that "My ex sold our movie to my rapist for distribution" and "it's been an open secret in Hollywood/Media & they shamed me while adulating my rapist." Following the release of two exposés in the Times and one in The New Yorker, McGowan began speaking out about people she viewed as enabling Weinstein and other abusers, adding that she was "allowed to say rapist" given all the accusers and accusations that had come to light.

Now am I allowed to say rapist https://t.co/95Ze9BixCT

From there, she continued to drag Ben Affleck and others, eventually drawing the suspension. Under pressure to explain why the company had blocked her access and forced her to delete a post, the @TwitterSafety account wrote:

We have been in touch with Ms. McGowan's team. We want to explain that her account was temporarily locked because one of her Tweets included a private phone number, which violates our Terms of Service. 1/3

The Tweet was removed and her account has been unlocked. We will be clearer about these policies and decisions in the future. 2/3

Which is, one would suppose, fine. Then the account offered this:

Twitter is proud to empower and support the voices on our platform, especially those that speak truth to power. We stand with the brave women and men who use Twitter to share their stories, and will work hard every day to improve our processes to protect those voices. 3/3

The high-minded rhetoric runs a little flat, given that Twitter is known for not suspending accounts that harass women — particularly those connected to Gamergate — and continues to host dangerous zealots, Richard Spencer and members of the various wings of the American white supremacy movement included.

McGowan, in her first tweet back, was having none of it.

when will nuclear war violate your terms of service? https://t.co/72FiiyoZ59

It's a clear rebuff both to the company and to current president Donald Trump, who has used his own account to not only threaten nuclear war with North Korea, something that most policy experts view as dangerously destabilizing, but also single out private citizens while in office, including ESPN host Jemele Hill, comedian Rosie O'Donnell and football player Colin Kaepernick, just to name a few.

"Get Out" director and comedian Jordan Peele helpfully pointed out that Trump's behavior may indeed be subject to a Twitter suspension, given the platform's own stated terms of service:

.Yes. In fact, that's already supposed to be covered.... pic.twitter.com/jjEOkVmluj

From there, McGowan opened up on a new target in the long list of people and companies that have caught fire from her and others in the wake of the Weinstein exposés: Amazon CEO Jeff Bezos.

1) @jeffbezos I told the head of your studio that HW raped me. Over & over I said it. He said it hadn’t been proven. I said I was the proof.

2) @jeffbezos I had already sold a script I wrote to your studio, it was in development. When I heard a Weinstein bailout was in the works

3) @Jeffbezos I forcefully begged studio head to do the right thing. I was ignored. Deal was done. Amazon won a dirty Oscar.

4) @jeffbezos I called my attorney & said I want to get my script back, but before I could, #2 @amazonstudios called to say my show was dead

4) @jeffbezos I am calling on you to stop funding rapists, alleged pedos and sexual harassers. I love @amazon but there is rot in Hollywood

5) @jeffbezos Be the change you want to see in the world. Stand with truth. #ROSEARMY #Amazon

Good luck with that, Mr. Bezos. Welcome back, Ms. McGowan.

UPDATE: According to the Hollywood Reporter, McGowan has confirmed to the outlet that the initials "HW" in her tweet to Bezos belong to Weinstein.