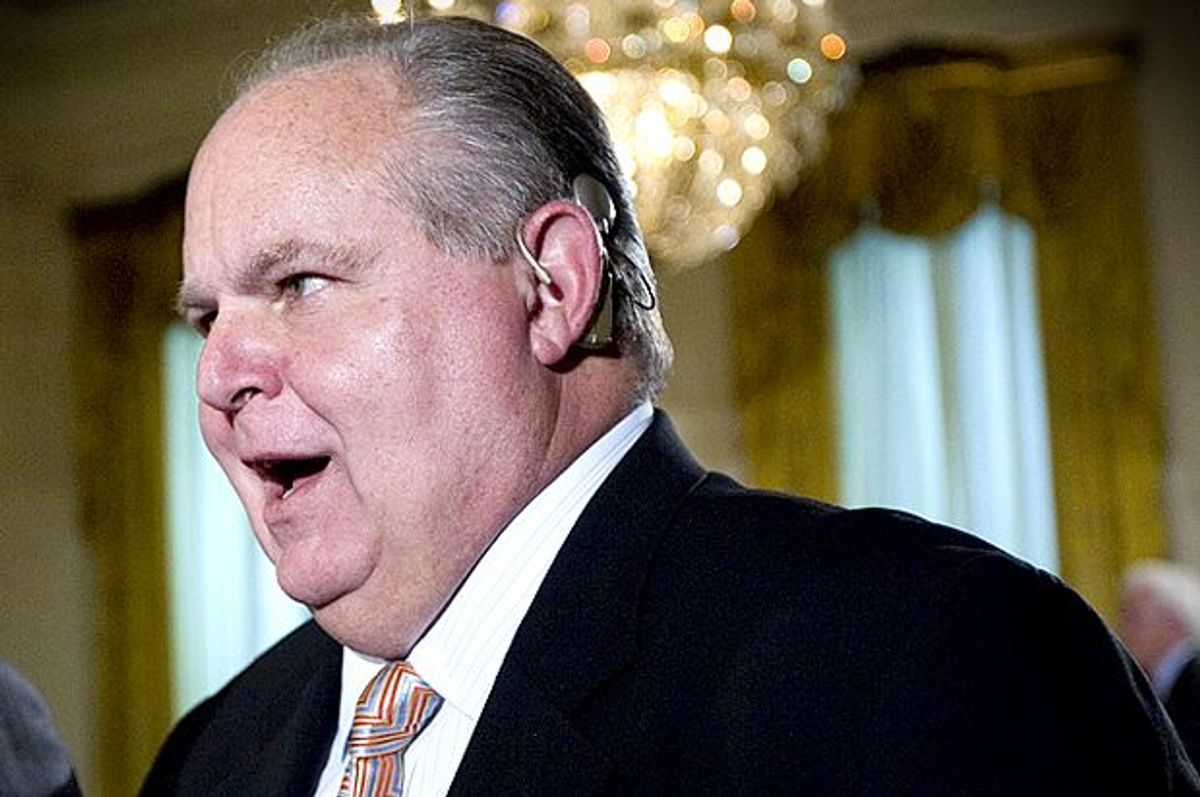 Conservative radio host Rush Limbaugh says he's beaming with pride for not being included on Salon’s list of the top 25 conservatives to follow on Twitter. But if you listened to his radio show Monday, it seemed like he was fuming.

"It is one of the greatest honors I have ever been bestowed to not be on an approved list of approved conservatives by a liberal publication,” the far-right pundit told his listeners.

Limbaugh highlighted Salon’s steps to get its readers outside of their liberal bubbles following the 2016 election. “What if we told you there are 25 conservatives actually worth following?” Salon’s Taylor Link wrote when he published the list that’s shaken political Twitter.

What Link cited in his selection criteria was a "level of deep ideological introspection that has surpassed liberals." As a peddler of conspiracy theories, Limbaugh fell short. Recently, the far-right thinker has called the NFL protests a conspiracy to destroy “masculinity” and suggested that the media’s coverage of Hurricane Irma was being politicized.

"Salon.com assures their audience they can safely read and not have an adverse reaction,” Limbaugh said, calling out the Weekly Standard’s Bill Kristol by name.

In fact, Salon will continue to hold these and all political thought leaders to account. The day after Link’s article was published, Salon called out Kristol by name in its analysis of Trump’s rise to editor-in-chief. “Kristol has never apologized for his own role in laying the groundwork for Trump,” Matthew Sheffield wrote.

Limbaugh lashed out at the conservatives on Salon’s list, saying that one thing unites them. “They despise Donald Trump," he said. Kristol, for his part, eventually rose to become the most outspoken conservative critic of Trump, even going so far to back independent candidate Evan McMullin.

"This illustrates exactly what beltway media elite intellectual conservatism has become: pleasing the enemy, gaining the approval of the left, being singled-out as above the fray of the rabble of conservatism,” Limbaugh alleged.

One of the conservatives on the list who was bashed by trolls following Salon’s Twitter announcement was Anna Navarro, who has called Trump a “racist, lying, misogynist pig” and been outspoken in the president’s befuddling response to Hurricane Maria in Puerto Rico.

This past week, Trump also spun the entire healthcare industry into chaos, threatening access to insurance for the nation’s poorest. He reportedly joked that Vice President Mike Pence “wants to hang” all the gays. In the aftermath of Harvey Weinstein, what’s wrong with continuing to hold a president who once bragged about sexually assaulting women to account?

“I just want to tell you how proud and honored I am not to be on it,” Limbaugh said as he wrapped up his remarks. If you ask us, he seems upset that he didn't make the cut. He won't until he gives us something more than conspiracy theories to consider.