Laura Benanti: "I don't live in a lighthouse, ladies!"

The Tony-winning actress on motherhood, miscarriage and being Melania 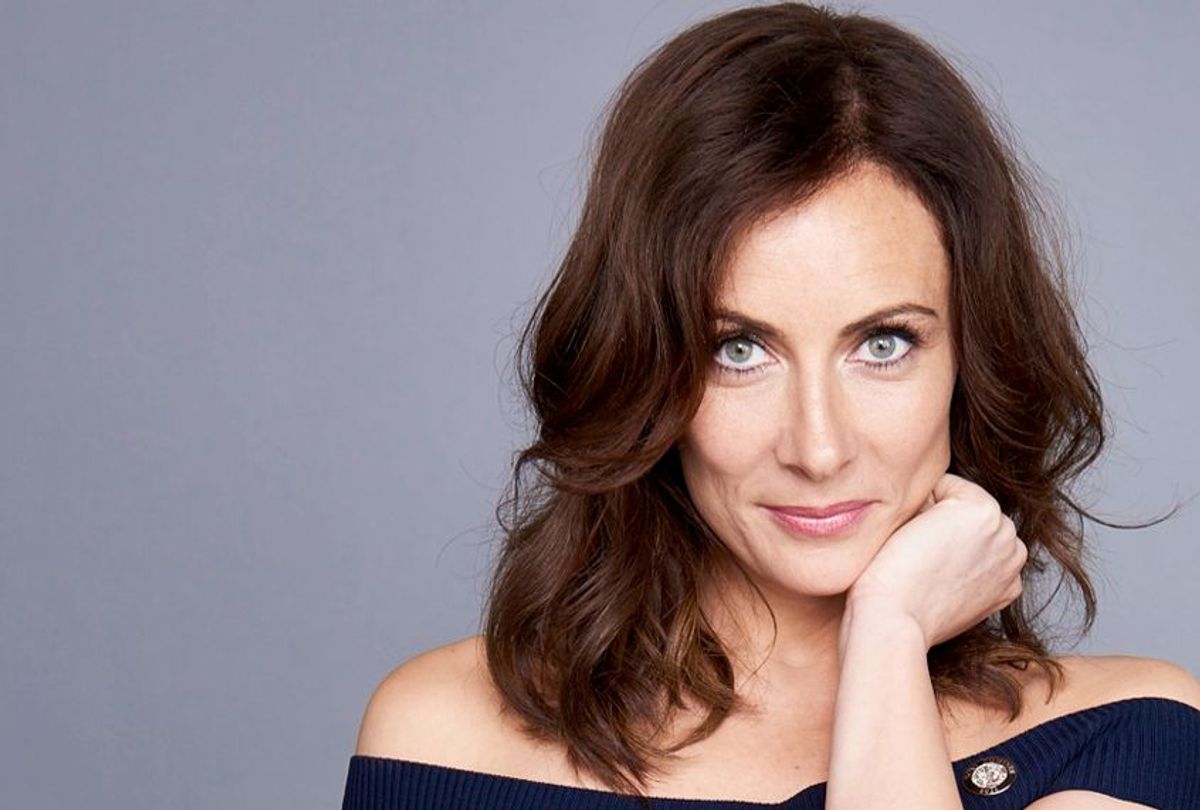 Despite what you may have seen in the conspiracy-verse lately, there is only one true Fake Melania, and her name is Laura Benanti. The 38-year-old actress and singer was already a name as a Tony-winning Broadway star and regular on shows like "Nashville" and "Supergirl," when her turn as America's leading member of the Third Wives' Club on "The Late Show with Stephen Colbert" introduced her to a whole new fan base. Recently, Salon caught up with the busy actress in between shooting for her new season of "The Detour," rehearsals for Amy Schumer's Broadway debut "Meteor Shower" and co-raising baby daughter Ella Rose with husband Patrick Brown to talk about sexism, motherhood and not living in a lighthouse.

How are you today? Having it all, right?

Yeah, it’s a lot. Motherhood looks so easy in commercials. And, oh my God, don’t even get me started about Instagram. That’s why my Instagram is just chock full of me being like, “This shit is hard.”

It makes me insane when I see a beautiful woman with a blowout and a white flowy dress standing at the ocean lifting her perfectly dressed baby up in the air, and they're both beaming. I'm like, that’s not life, or it's not mine.

I look like a garbage monster right now. Literally, my doorman said to me the other day, “You know what I like about you? You don’t care about what you look like.” You know what? I used to but I don't anymore. Your priorities totally change.

You post these photos where you say, “This is me; I’m exhausted; my baby is teething; I’ve had no sleep; I’m a mess.” Why is it important to do that?

Because for me it is the antidote to the sancti-momommies who are making it seem like motherhood is this daily Thomas Kinkade painting. I don't live in a lighthouse, ladies.

It’s the same reason that I wrote about my miscarriage. I just feel like part of uprooting this deep seated misogyny in our culture is talking about women's issues and naming them. For me, women's reproductive health, women's reproductive rights, miscarriage, all of these sort of taboo subjects, I want to talk about them, to show other women that they're not alone and just to make it less of a big deal. The more we talk about something, the more that it lives in the sunlight. For me, with my daughter and being honest too about having postpartum depression and anxiety — it's so incredibly common.

Having a baby after a miscarriage, one would think that every day I'd be skipping through some flower field. But it's hard. My daughter has had some issues — she didn’t sleep; she was waking up every hour. I wasn't getting any rest. I just want other moms who might be going through a similar experience to know that they are not alone. They're not crazy. You don't have to love every second of it. You can love this little human more than anything on this earth, and I do, but it can also be challenging and that's okay. That doesn't make you a bad person.

I also think women who’ve gone through infertility go through the same situation, where it's, “Oh now I'm supposed to just be happy all the time and my kid can never annoy me.”

And those are the ambivalent, counterintuitive feelings can exist at the same time. Women are not allowed to be more than one thing at a time. Men are allowed to, especially on TV and in the way that we see them depicted in the media. Men are allowed to be complicated, and women are — in my humble opinion, and I think it’s getting way better — expected to be one thing at a time. [But] we can hold multiple feelings in our bodies at the same time.

You’ve got, like, a bazillion things going on right now. You’ve got "The Detour," you’ve got "Meteor Shower," you're on PBS "Great Performances," where we can watch "She Loves Me." How are you doing with all of this? And are you going to be back doing Melania?

Yes, well they asked me actually to come back, but I was in the hospital with my daughter, so I was unable to do that. It was so disappointing because they wrote probably the funniest sketch we would have done. I was so bummed, but obviously family comes first.

"The Detour" was amazing. My husband [was] so incredibly supportive. He works for a startup organization, so he works from home, and he was able to come to Calgary with me and Ella while I did the show. That was the most fun I had ever had on a job ever. It was just so fun, the writing is so good.

You are a regular now this season.

I am. I felt so honored. When they brought me on last year as basically a guest star, while I was pregnant, and then they asked me to come back as a regular this year, and I was just so excited. I’m such a fan of the show. Jason Jones and [writer/director] Brennan Shroff, they are so talented. Super mommy Natalie Zea, she’s just incredible. That was really, really fun.

Of course, there were forest fires happening. That was really stressful. My daughter started to have an asthmatic response to the forest fires, so I was holding her up at night, just so she could sleep, and then going to work. That was bizarre and insane. Then she ended up having to go home about ten days earlier than me. That was so hard and weird and complicated to be away from her for those ten days, but also like, oh my God, I’m going to sleep 14 hours a day because I haven’t slept in seven months.

And now I’m in rehearsals for "Meteor Shower" with Amy Schumer, who’s the coolest chick you’ll ever meet, and Keegan-Michael Key and Jeremy Shamos. Jerry Zaks, I did my second show on Broadway with him, "Swing!" And of course Steve Martin is a legend and a genius. That is such a fun room to be in. And I’m doing concerts with my mom at 54 Below.

I heard you are very up on Amy Schumer. I know you have been interviewed, and people have been asking, “What’s she like on stage?”

I’m obsessed with her. She is exactly like you want her to be. She is completely untouched by fame. She’s super appreciative; she’s just normal; she’s just a regular person. She’s hilarious. I’ve never met a quicker mind. She will microwave a joke for you. Like, “That took two or less seconds. How did that come out of your mouth?” That would have taken me 25 minutes to think about, or I never would have.

It’s really interesting because I’m such a people pleaser and she’s not. I just try to be near her, hoping that by osmosis I get some of it, because she is just brave. She’s not doing anything for anyone else. She just is herself, and I’m so inspired by that, and I’m trying at the ripe old age of 38 to take a little bit of that into my life. Yeah, I think she is pretty much the bee's knees.

Yes, and it's not just our industry. I think what this election has unearthed, for me, is just a deep seated misogyny in our culture. I don’t understand how anyone can look at the most qualified candidate we've probably ever had, and then the least qualified candidate we've ever had, and see the outcome of the election and not go, “There’s little bit to do with the fact that she was a woman.” I think it's primal. I think it's since the beginning of time. I don't think women have been treated like gold throughout history.

This is probably the best we've ever been treated. However, we are now saying it's still not good enough. We don't want to be judged, abused or used for our bodies. We want to have control over our bodies and our lives. For a man in any position, you are not allowed to make us physically uncomfortable, or even worse, assault us or terrify us or harass us. I am grateful that these issues are out in the open, because Anne Boleyn got her head chopped off.

Every woman I know, we’ve been having really intense conversations. Has it been that way with you and your friends?

I think women are resilient. We give birth to babies, and then we don’t go on vacation for two weeks. We then start feeding our babies from our bodies and then we go back to work. Women go through horrendous abuse cases. We should also say there are men who are sexually harassed. There are men who are abused. I think it's more common with women, certainly, but I know plenty of men who have gone through very scary similar situations, and certainly young boys are no strangers to predatory people. I don't think it is solely a women’s issue, but of course that’s what we are talking about right now. We’ve been having super intense conversations with all my girlfriends. And everybody has a story and that makes me really sad. But I'm glad we're talking about it.

Laura Benanti can be seen on Broadway in the new comedy "Meteor Shower" and performing around the country with her mother Linda in "The Story Goes On."

This interview has been lightly edited and condensed for clarity.