O'Reilly claimed no one complained about him at Fox News; Kelly proves she did herself 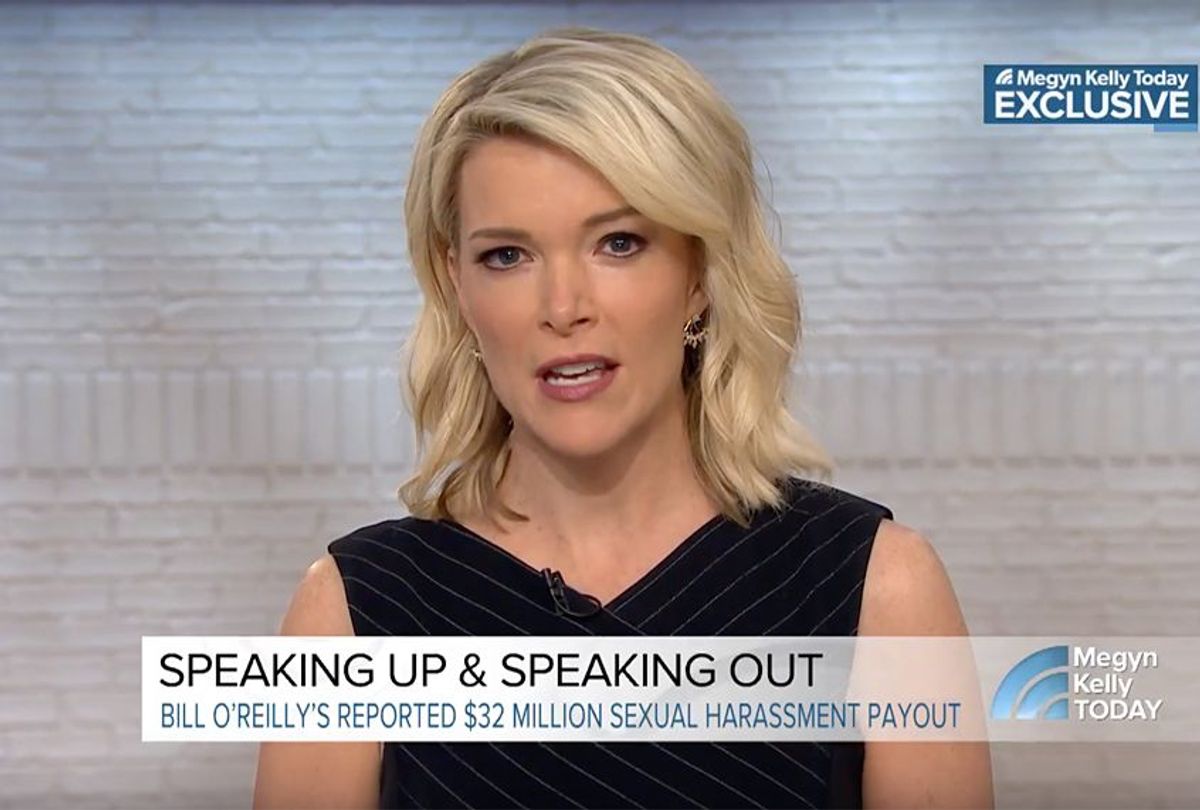 Say what you will about former Fox News host Megyn Kelly and her misbegotten version of "TODAY" — Salon certainly has — she at least used her NBC platform Monday to launch a scathing rebuke to ex-colleague Bill O'Reilly.

Kelly kicked off her monologue Monday morning by targeting O'Reilly amid a report that he had recently made a $32 million sexual harassment settlement just before signing a four-year renewal worth $100 million.

“Fox News was not exactly a friendly environment for harassment victims who wanted to report, in my experience,” Kelly said. “However, O’Reilly’s suggestion that no one complained about his behavior is false; I know because I complained.”

In April, when news of O'Reilly's past transgressions first came to light, the former Fox News anchor insisted, "no one has ever filed a complaint about me," which he wrote on his website.

But Kelly clapped back at that claim in her monologue Monday, referencing emails she had sent to then-Fox News co-presidents Bill Shine and Jack Abernethy last year.

In the November emails, Kelly blasted O’Reilly for speaking ill of the alleged victims of Roger Ailes in an interview. Kelly reminded the executives of O'Reilly's "attitude of shaming women and his own history of sexual harassment accusations." Shine assured Kelly that he would "deal with" O'Reilly, but later that night "The O'Reilly Factor" host went back to harassing women.

"It gives me no pleasure to report such news about my former employer, which has absolutely made some reforms since all of this went down," Kelly said. "But this must stop. The abuse of women, the shaming of them, the threatening, the retaliation, the silencing of them after the fact. It has to stop."

“O’Reilly’s suggestion that no one ever complained about his behavior is false. I know because I complained.” @megynkelly on Bill O’Reilly pic.twitter.com/BO8ifQcJbu

Kelly's monologue Monday was a stark departure from the host NBC viewers have seen over the past few weeks. Kelly had promised to refrain from talking about politics, but her comments on O'Reilly formally placed her back in the thick of it.

In a sense, it was a return to what many — some on the left included — first liked about her. Notably, it continued her ongoing dialogue about Ailes.

Kelly's book "Settle for More," detailed Ailes treatment of her over the years, which she kept records of for future investigations. She alleged that Ailes forced her to kiss him on the lips and lorded his power over her when she complained of sexual harassment.

“This is not unique to Fox News," Kelly said Monday. "Women everywhere are used to being dismissed, ignored or attacked when raising complaints about men in authority positions. They stay silent so often out of fear. Fear of ending their career, fear of lawyers, yes. And often fear of public shaming, including through the media.”