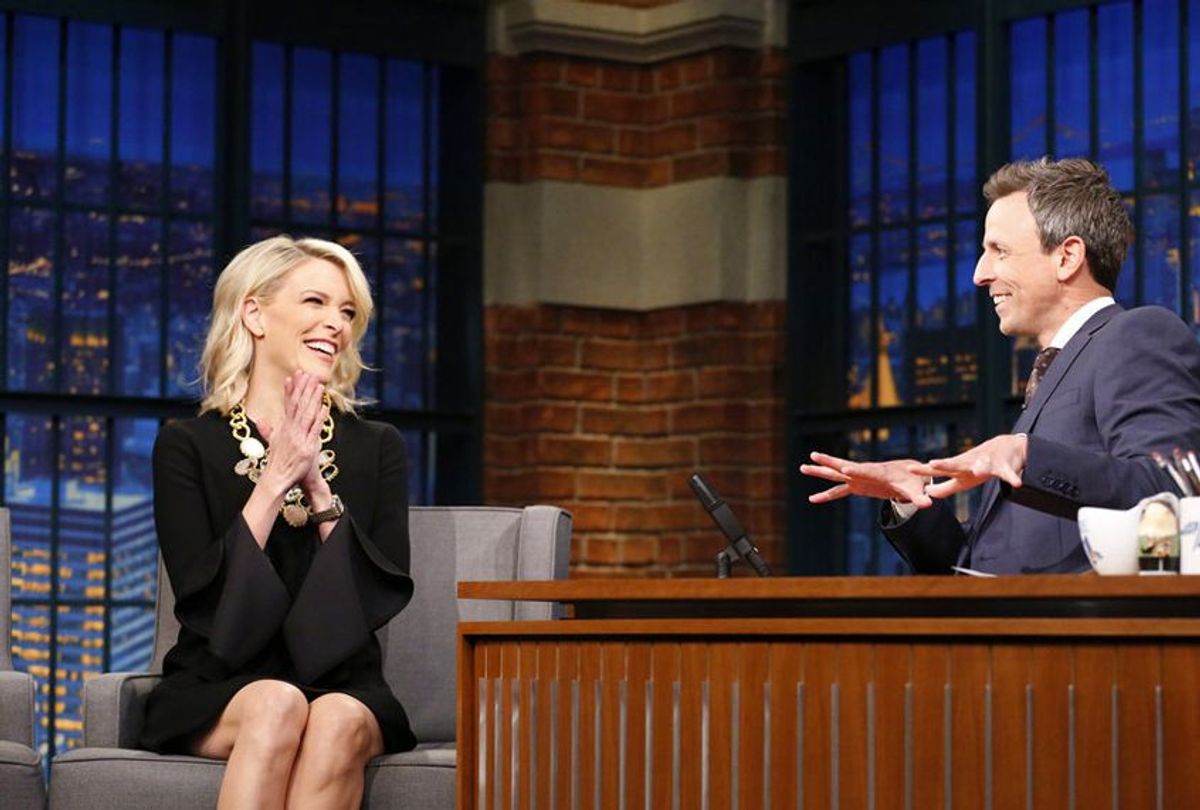 Megyn Kelly appeared on the "Late Night with Seth Meyers" in the aftermath of comments Monday in which she dispelled Bill O'Reilly's claims that no woman had ever complained to Fox about him. She said it was the revelation that O'Reilly paid $32 million in a legal settlement to a woman who had alleged he harassed her that made her finally tell her story. After all, she asserted, she complained to Fox about him and nothing transpired and the settlement itself proved O'Reilly's lie.

"He was renewed at the company after he did that, and I know that Fox says it didn't know, the question remains why didn't they?" Kelly told Meyers. "It was time to tell that story. I take no pleasure in discussing Fox News in that way, because I had a lot of good years there, and they're not all bad, they've got some great people. He is not one of them."

New York Times reported Saturday that O'Reilly settled a sexual harassment suit for $32 million in January. One month later, Fox renewed and increased his contract. While the Times said Fox knew about the allegations against O'Reilly, he promoted the defense that no woman had ever complained to the company about him.

Kelly then talked about the lack of safe spaces, particularly in the work place, available for women to report sexual misconduct, and why so many women keep quiet.

Kelly says this was especially true at Fox, as for years there was not a "safe avenue" to report such complaints. "HR was controlled by the CEO, who was harassing half of the women in the building," she said referring to Roger Ailes, who was ousted from his post after several women alleged he harassed them, Kelly included. "It was not a meaningful outlet."

Kelly added, "Men in positions of power need to not only stick up for us publicly, but in the bars, and at nighttime, and when we're not there, and when they're talking about us in this way, and when we're walking out and they're looking at our ass. Those are the moments you need to stand up and say: 'dude, no.'"

Another former Fox employee also discussed the network's ongoing issues on "The Late Show With Stephen Colbert." Gretchen Carlson, who brought her sexual harassment suit public against now deceased Ailes, explained the huge career and life risks involved when coming forward with such claims, especially when the allegations are lodged against a rich and powerful man.

Carlson sarcastically dismissed the notion that women allege sexual harassment for any reason other than justice. "Yeah, because so many women want to come forward with sexual harassment claims to be famous and make money," she said. "I've never, ever heard of one woman wanting to do that."

With the fall of Harvey Weinstein, and others accused of similar trespasses as well, as the newfound power of survivors, it seems we may be reaching some sort of tipping point. The very culture that enables powerful men to allegedly harass and assault women with no consequence is, at the very least, in the spotlight and under fire.

But even as some space opens up for women to allege sexual harassment and assault complaints, it is not clear that all women have access to it. As Lindy West wrote in The New York Times of Kelly, "there are people who listened to her indictment of Ailes who would never have listened to, say, Anita Hill." Elsewhere and amidst the seemingly endless complaints against Weinstein, the disgraced producer specifically responded to actor Lupita Nyong’o's claims, which were lukewarm on the spectrum of complaints alleged of him.

Right now, one could argue that we may be seeing the privileging of survivor stories, a phenomenon best illustrated by the fact that Kelly — someone who's feminism is specific and limited and whose support for women has often clashed with her personal conservative ideology — is quickly becoming the face of public response to harassment. That Weinstein would single out Nyong’o for dismissal also says something disquieting as the #MeToo movement begins to coalesce.

It's a general positive that Kelly speaks out. But, specifically, redressing rape culture requires participation from everyone. We should include Kelly, but not rely on her, maintaining democracy and vigilance when it comes to who is believed and who is supported. Right now, it may be that not all #MeToo's are being treated the same.