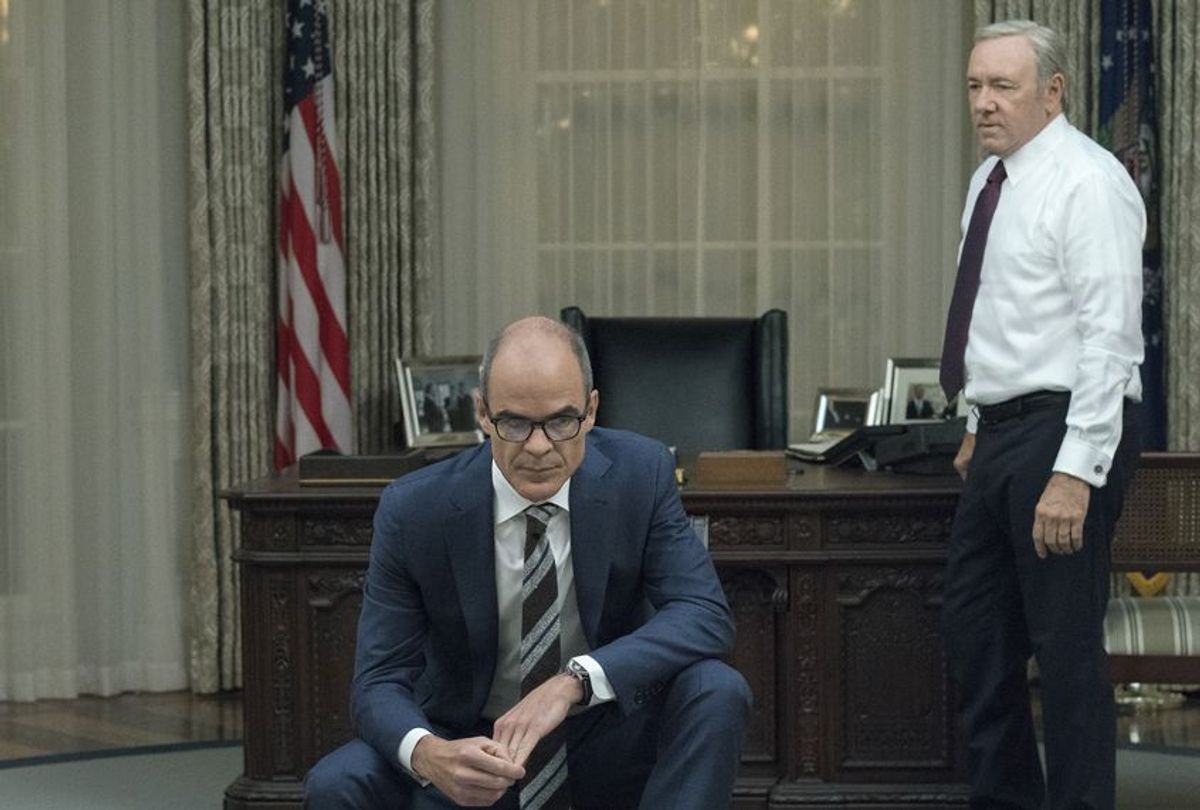 Michael Kelly and Kevin Spacey in "House of Cards" (Netflix)
--

According to a report in Variety, Netflix is already in advanced discussions to develop at least one spinoff based on the streaming service's popular, and now canceled, show "House of Cards." News came down Monday that the show, which first bowed in 2013, would not be continuing past its sixth season, currently in production.

While it was unclear — and perhaps unlikely — that the cancellation of "House of Cards" was precipitated by actor Anthony Rapp's claim that "Cards" star and producer Kevin Spacey assaulted him in 1986 when Rapp was underage, the announcement of the series' end did come less than 24 hours after he shared his story with Buzzfeed.

At this stage, it appears that the spinoff in development will center around Doug Stamper, the long-suffering, but dedicated right hand of President Frank Underwood (Kevin Spacey) played by Michael Kelly. Already, writer Eric Roth is attached to the still-developing project.

Variety adds that other spinoff shows featuring other characters from the widely acclaimed series are also under consideration at this time, but none of them have writers or producers attached.

It's an interesting development, though one that may or may not have been in the works before the disturbing allegations against Spacey — and his highly criticized apology for them — came to light. Already, there's wide fan support for Kelly's character as well as that played by Robin Wright, Claire Underwood.

Given that and that Netflix and its partner, Media Rights Capital, have a considerable amount of money and time invested in this intellectual property and there already exists a broad production apparatus for "Cards" and that there's a large number of behind-the-scenes staff who may soon be out of work, the idea of spinoffs makes at least some sense.

As well, the collection of BBC miniseries upon which "House of Cards" is loosely based offers a final narrative that could be a blueprint for a Spacey-free series. No spoilers, but in its last chapter, "The Final Cut," the analog of Frank Underwood, Francis Urquhart, makes a stunning exit.

That said, n0 one at Netflix or Media Rights Capital has confirmed Variety's report with a public statement and it is unclear how or if Spacey would be involved given that he is an executive producer of the show.

At this time, "House of Cards" Season 6 is still in production, though Netflix and Media Rights Capital released a statement that Spacey is not currently on set. It read:

Media Rights Capital and Netflix are deeply troubled by last night’s news concerning Kevin Spacey. In response to last night’s revelations, executives from both of our companies arrived in Baltimore this afternoon to meet with our cast and crew to ensure that they continue to feel safe and supported. As previously scheduled, Kevin Spacey is not working on set at this time.

Right now there is no word on how, when or whether Spacey will return to the production.

The award is typically given to producers, writers and behind-the-scenes creatives who have somehow improved or made a contribution to television on a global scale. Recent honorees include Shonda Rhimes ("Scandal," "How to Get Away With Murder," "Grey's Anatomy"), Julian Fellows ("Downton Abbey") and Matthew Weiner ("Mad Men").