Of course Sean Hannity thinks that everything is Hillary Clinton's fault 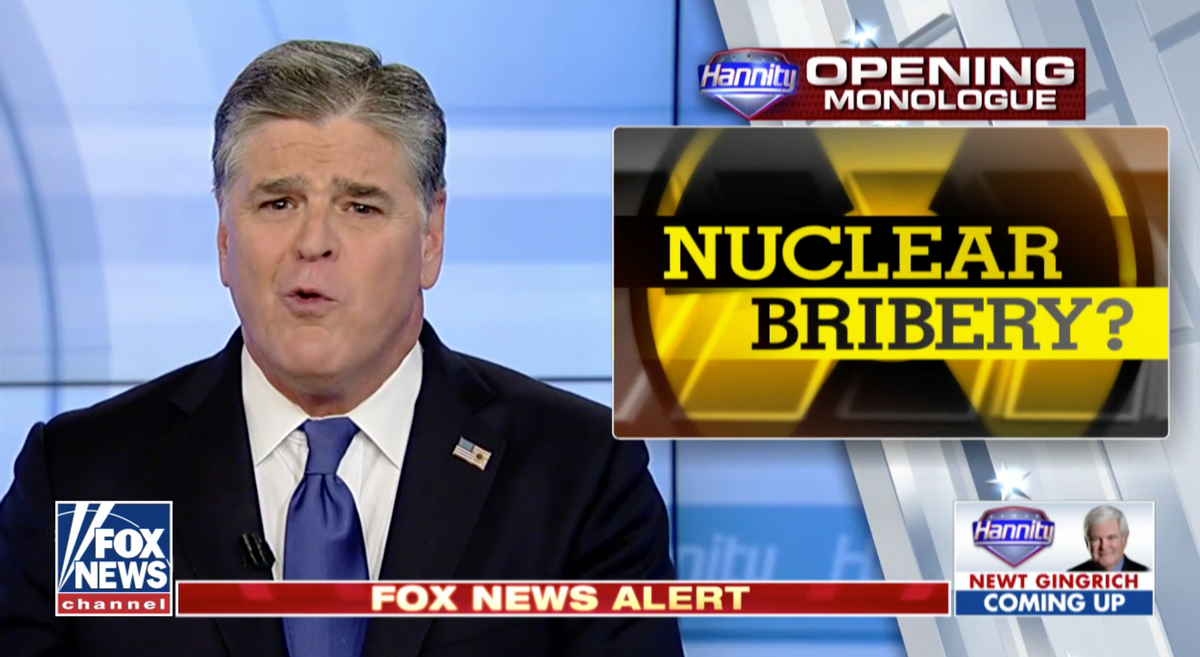 On Monday, President Donald Trump's former campaign manager was indicted for, among other things, conspiracy against the United States. A Trump adviser, whom the president touted during meetings, was revealed to have pleaded guilty to lying to the FBI about his contacts with Russia in order to obtain Hillary Clinton emails.

So even as it's becoming pretty clear that there was contact between the Trump campaign and Russia during the campaign last year — and the purpose was to obtain Clinton's emails — Fox News host and Trump lackey Sean Hannity is tilting at windmills. Namely, a windmill named Robert Mueller.

Mueller "attempt[ed] to change the narrative to distract from the real Russia scandal," Trump said Monday night, after glancing over news of the Paul Manafort indictment —  completely ignoring the conspiracy charges. Hannity instead focused on his fallback trope of bogus talking points about the Uranium One deal with Russia, in which Hannity baselessly claimed that "major crimes were committed. Don't think this is a coincidence."

Hannity said that, because Mueller was the FBI director at the time, he was "complicit" in the scandal because Clinton wasn't arrested on the spot, or something.

"So now, they need to change the narrative after a very bad week and distract the country from their evidence and their involvement in possible collusion," Hannity added.

It's an admirable effort for Hannity, who has desperately wanted to distract his audience from the calamity befalling the White House to which he's tethered whatever integrity he had left. After all, who else could, when faced with his house being on fire, yell at the house across the street for having their Christmas decorations up too early?

In his opening monologue, an obviously frazzled Hannity let slip what this is all about — turning Clinton into the faux president in order to put her on an ersatz trial. "This is what matters. These are the facts. This is where the evidence comes in," Hannity said.