Kelly only said what many white Americans believe: Slavery wasn't that important and the Southern cause was "noble" 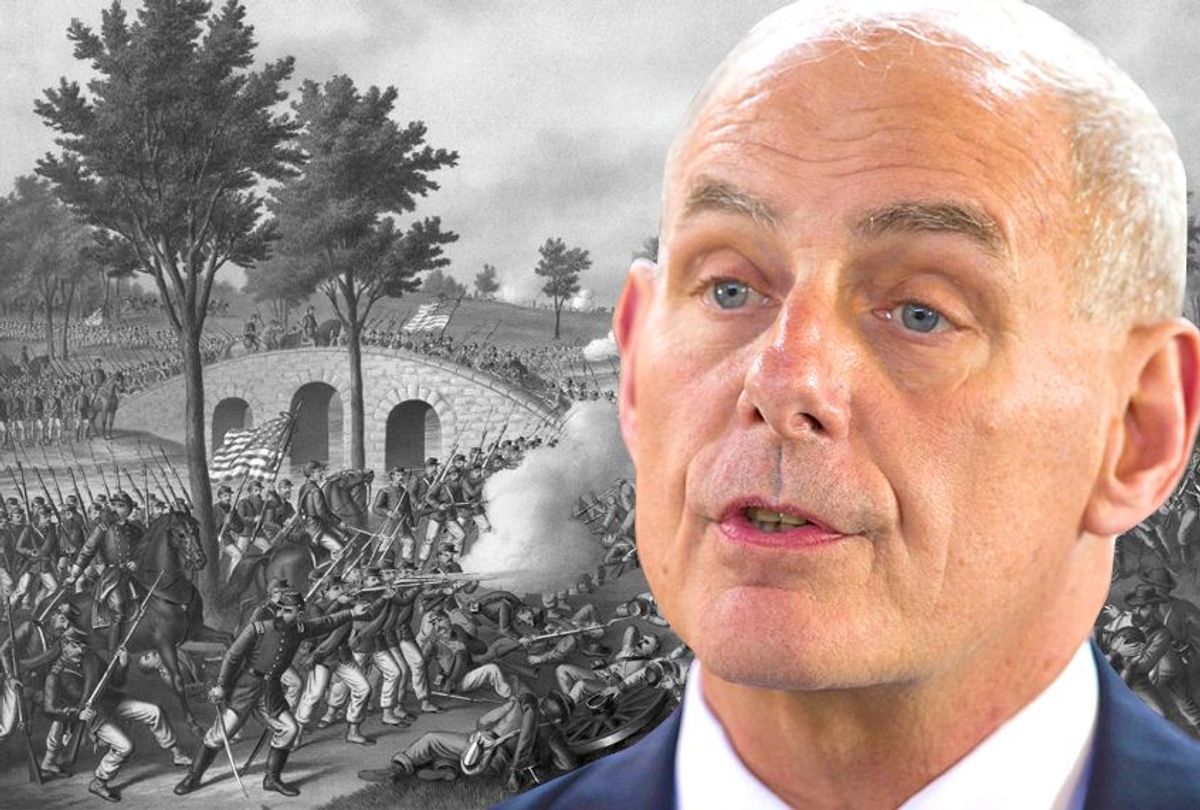 If White House chief of staff John Kelly had any self-respect or integrity he would be embarrassed right now. Despite his distinguished service as a Marine Corps general, Kelly apparently jettisoned such values when he went to work for President Donald Trump.

During an interview on Laura Ingraham's new Fox News show on Monday night, Kelly told the host that he viewed Confederate general Robert E. Lee as  “an honorable man. ... He was a man that gave up his country to fight for his state, which 150 years ago was more important than country. It was always loyalty to state first back in those days. Now it’s different today. But the lack of an ability to compromise led to the Civil War, and men and women of good faith on both sides made their stand where their conscience had them make their stand.”

He also defended Confederate monuments. “I think we make a mistake, though, and as a society and certainly as individuals, when we take what is today accepted as right and wrong and go back 100, 200, 300 years or more and say what those, you know, what Christopher Columbus did was wrong. ... You know, 500 years later, it’s inconceivable to me that you would take what we think now and apply it back then.”

Kelly's understanding of American history and the Civil War is piss-poor and willfully ignorant. To claim that the treasonous Confederate cause and its leaders such as Lee were "honorable" people is to confuse the white supremacist fiction and propaganda channeled by movies like "Gone With the Wind" and "The Birth of a Nation" with empirical reality, historical rigor and actual scholarship. Unfortunately, Kelly's delusions do not exist in isolation: They are shared by many other (white) Americans as well, including Donald Trump.

Of course, Kelly's claims have been publicly eviscerated by leading historians of American history and the Civil War, including Eric Foner, David Blight and Stephanie McCurry. Documentary filmmaker Ken Burns refuted Kelly's claims as well. Author Ta-Nehisi Coates also showed Kelly's claims about the Civil War to be a sham and lie that makes demonstrable fact into mysterious, lazy opinion.

I spoke to historian Gregory Downs, the author of "After Appomattox: Military Occupation and the Ends of War" and a professor at the University of California -- Davis. He offered additional context for Kelly's claims, saying they "reflect a regrettable but common way that Americans turn away from the centrality of slavery to the Civil War and the Confederate cause."

Of course it is challenging to read context into brief verbal comments, but at best his comments are grotesquely incomplete, at worst historically illiterate. In pointing to an unwillingness of Americans to compromise, Kelly seems to bypass the innumerable compromises made prior to 1861 and, even more significantly, to avoid asking what would have been compromised in 1860-1861 to avert or, more likely, delay the Civil War.

Every war at some level emerges from a failure of compromise, but Gen. Kelly, based on other comments he has made, considers some wars worth fighting; he has not to my knowledge denounced World War II or other U.S. wars as failures of compromise, He seems, like most people, to view some compromises as not worth making.

What specific compromises might have delayed the Civil War in 1860 or 1861? Downs says that would have involved a promise "to extend slavery into the [Western] territories and to cast U.S. protection over slavery in Cuba."

As Abraham Lincoln said in his first inaugural, "One section of our country believes slavery is 'right' and ought to be extended, while the other believes it is 'wrong' and ought not to be extended. This is the only substantial dispute." What compromise would Gen. Kelly suggest? And what does he expect would be the outcome of such a compromise? It is not illegitimate, of course, to ponder those questions, but we have to, morally as well as analytically, ask how such a compromise would have affected all Americans, including the four million slaves.

Kelly's ideation of the Confederacy has been widely condemned by historians and other experts, but it points to a much larger cultural and political sickness along the color line in America. Intentionally or otherwise, Kelly is transforming the Confederate cause -- whose main goal was to keep millions of black people as human property to be raped, beaten, tortured, sold and killed -- into something noble.

When conservatives resort to this "Lost Cause" myth regarding the Confederacy, they are deploying a narrow racial and tribal understanding of what it means to be American. Apparently, Kelly's conception of the country and its history does not include on an equal basis those black Americans and others who resisted and brought down the Southern slaveocracy, and who in the present believe that such an odious cause -- the one Ulysses S. Grant described as "one of the worst for which a people ever fought, and one for which there was the least excuse" -- should not be honored.

Most important, to defend and make noble the Confederacy and its leaders like Lee is to be complicit with a basic logic that deems black people to be inferior to whites. On the supposed honor and integrity of Lee, Gregory Downs has this to say:

It is surprising that a person who recently called for veneration of U.S. soldiers who die in combat should go out of his way to celebrate people like Robert E. Lee, who was responsible for killing active-duty U.S. Army men, especially since Lee violated his own oath of allegiance to the United States, taken when he graduated from West Point. Lee also argued that he did not need to treat active-duty U.S. Army prisoners of war according to the laws of war if they were black, and made efforts to prevent exchanging them and to use them as human shields. Additionally, Lee's army notoriously diverted as it invaded Pennsylvania to capture free black people and send them to the South to be enslaved.

Certainly Lee considered himself an honorable man and thought about honor a great deal. But we aren't obliged to stop the conversation at that point. Lee's antebellum orders to whip and torture slaves, his wartime efforts to treat U.S. Army soldiers as human shields, and his army's efforts to enslave free people all have to shape our understanding of who he was.

Gen. Kelly's claim that it "was always loyalty to state first back in those days" is false as he stated it. Loyalty to state was a part of people's perceptions, but Lee's oath was to the United States, not to Virginia, and Southern slaveowners celebrated federal power over the states when it helped them defend slavery. They passed -- as a demand in the so-called Compromise of 1850 -- the single-largest expansion of federal power over states in U.S. history to that time in the Fugitive Slave Law of 1850, which empowered federal marshals and commissioners to disregard state and local courts in order to send black people -- including in practice free people never held as slaves -- to the South for enslavement.

These are the roots of the white supremacist project as manifested by white-on-black chattel slavery in America. If the Confederacy (and later on the Black Codes, debt peonage, Jim and Jane Crow and modern American apartheid) was a tree then white supremacy and anti-black animus were its roots. These attitudes have evolved over time (shifting from explanations rooted in "biology" to "culture"), but are still present in American society.

For example, public opinion and other social science research has repeatedly demonstrated that, more than 150 years after the end of slavery, many white Americans still believe that black people are bestial and animalistic, do not feel the same amount of  physical or emotional pain as whites, and are more violent and less intelligent. Moreover, Republicans and conservatives are more likely than Democrats and liberals to possess racist attitudes towards black Americans.

Recent surveys also reveal that 55 percent of white Americans -- and a far higher proportion of Republicans and Trump supporters -- believe that they are victims of "racism" or "anti-white" bias and are now an oppressed group in American society. This is a direct continuation of widespread fears among whites in the antebellum South that if black people were emancipated they would dominate and oppress whites.

The Confederacy may have been defeated on the battlefield, but it lives on in the post-civil rights era Republican Party. The latter has enacted legislation whose goal is to prevent African-Americans and other nonwhites from voting. Republican politicians and other spokespeople have consistently spoken out against removing monuments that honor the Confederacy. Other Republican politicians and opinion leaders have suggested that slavery was a net positive for black Americans. In a recent poll, 20 percent of Trump supporters indicated that they believe American slavery should not have ended.

One cannot overlook how much of the Republican Party's power comes directly from former Confederate slave states. Most notably, the party's dominant political strategy consists of using both overt and subtle racist language and other signals to win over racially resentful white voters as well as overt racists. In total, the neo-Confederate whitewashing of American history is a core aspect of the Republican Party's appeal.

In his own way, John Kelly is channeling the core logic of white-on-black slavery and racial terrorism.

In his recent book "On the Pleasures of Owning Persons," Volney Gay explains this logic:

Why in 1860 did some 400,000 American families own slaves? The simplest answer is also the most appalling: because they wanted to. They, white Americans, wished to expropriate the labor, luxuriate in the bodies and dominate the minds of African and their descendants. When granted, each of these wishes yields pleasure. Expropriated labor turned worthless swamps into valuable farmland; black bodies became the objects of sexual and physical pleasures and sources of new "product"; dominated minds generated tremors of narcissistic entitlement in the ruling classes. ... According to Southern leaders, every white person, no matter how vicious, was superior to every black person, no matter how noble.

If white Americans in the present can watch videos in real time of unarmed black men, women, boys and girls being shot dead, beaten and otherwise humiliated and abused by America's police and still twist their minds into believing that black folks are always the threat and the country's cops are "in fear of their lives," then Kelly's delusions about a war that ended 152 years ago almost make sense. One of the greatest privileges of whiteness has always been a willful ignorance of the realities of racism--and of your own country's history.