A different maid's tale: The beautiful deceit of "Alias Grace"

Netflix debuts another series inspired by Margaret Atwood, based on the true story of a maid convicted of murder 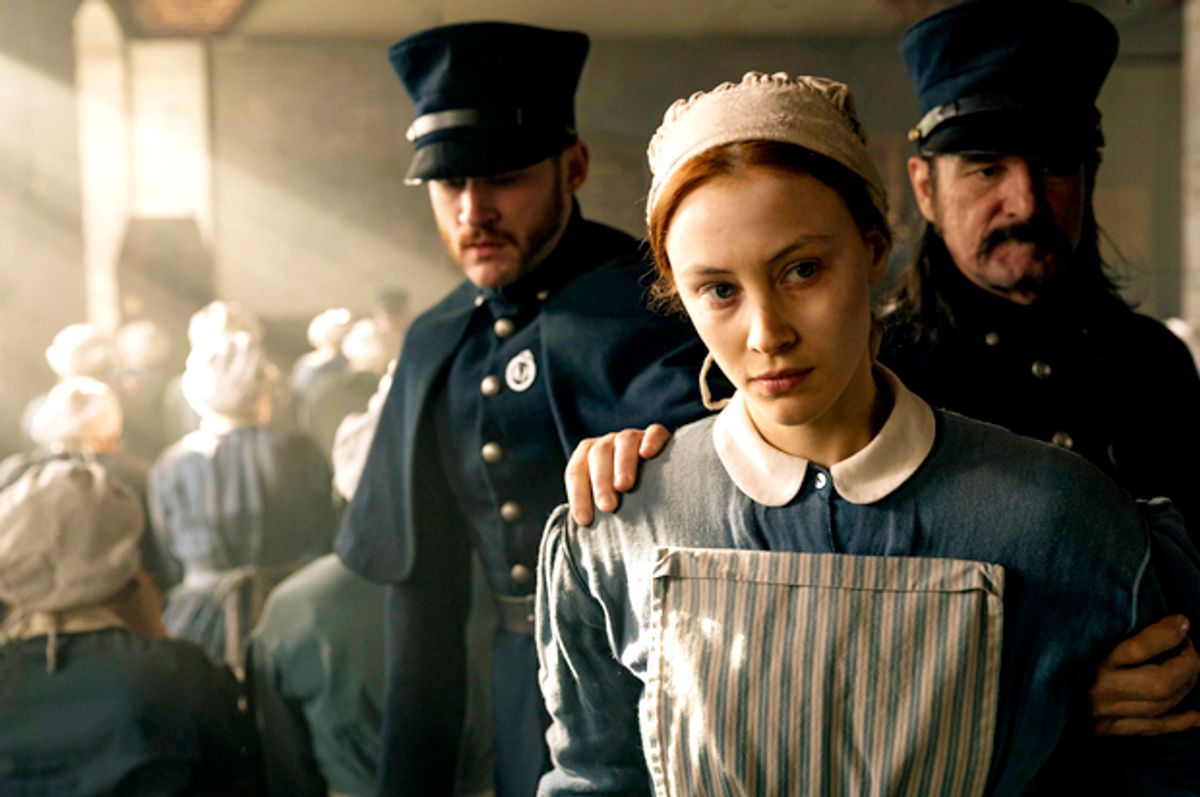 The cinematography in Netflix’s “Alias Grace” resembles an impressionist painting, with each frame drawing the eye to a central form surrounded with gauzily suggested props. Most often the main feature is Grace Marks, a polite, deferential domestic played by Sarah Gadon. Scenes taking place in the story’s present often show Grace with her face bowed over her quilting work, telling her story to Dr. Simon Jordan (Edward Holcroft).

When she looks Dr. Jordan squarely in the eye, she does so with the air of a downtrodden woman, honest and innocent. Her Irish lilt has a mesmerizing buoyancy to it that entrances the viewer and seduces her visitor. Grace, in that sewing parlor, has a delicacy about her that makes one inclined to favor her case. She’s a murderess, one who has been imprisoned for 15 years by the time the story starts in 1859.

“Perhaps I’ll tell you lies,” she warns Jordan when they first meet. By then she’s already dropped a few hints to the viewer that she has some skill in deception. The series opens with Gadon viewing her herself in a mirror, and  she seamlessly adopts the expressions of all the women others have thought her to be: One after the other, she dons the face of an inhuman female demon, then a good girl with a pliable nature, and one who is cunning and devious after that, soon followed by the slackened gawp of a someone “soft in the head and little better than an idiot.”

“And I wonder,” she asks in her voiceover narration, ”how can I be all these different things at once?”

“Alias Grace,” which comes to Netflix on Friday after its initial debut on Canada’s CBC, feels fundamentally different than another series based on Margaret Atwood novel, “The Handmaid’s Tale,” starting with the fact that it’s based on a historical event as opposed to a speculative scenario.  With regard to its view of a woman’s struggles in the world, the Netflix series is an apt companion piece to “Handmaid’s,” reminding us of a time not so long ago when women had little to no power over their fates, and how quickly anything gained can be snatched away.

Atwood used the case of Grace Marks, a domestic who emigrated to Canada from Ireland; in the series we get an eyeful of her family a grueling eight-week journey in the vomit-slicked hold of a ship. Eventually she joins the household of Thomas Kinnear, the man she and a fellow servant would eventually be convicted of murdering along with his housekeeper Nancy Montgomery.

The journey to that fate, as portrayed by the cast and directed by Mary Harron, is as lyrical as Grace’s sing-song voice. Even its sickening bits have an odd poetry to them, although the dream-like interpretations of everyday objects and occurrences hold a keener ability to mesmerize the audience and Grace’s would-be savior Dr. Jordan.

Their interactions occur in the sewing parlor of the penitentiary Governor’s home, where she’s employed as a servant while also serving as a showpiece to visitors who want a peek at a famous murderess. Grace muses about that word, murderess, in a voiceover that establishes the euphonious nature of her storytelling early on in the series.

Sarah Polley, produces and wrote the script for “Alias Grace” and she steeps the plot in such layers of mystery, prodding at our assumptions about its main subject and the place of women in that era. She and Harron also toy with popular expectations of how women are portrayed and comport themselves in period dramas. Initially the story takes on a gentle tone, but soon flashes of violent assaults Grace sustains in the asylum hint at a darker truth.

Hidden beneath her melodious voice amply peppered with a polite “sir” every few sentences is a rage at her powerlessness, but one that never explicitly erupts in polite company or even in front of the audience. Gadon’s luminous performance channels this force while sublimating it beneath her character’s mask of blank, open tenderness in a way that’s tragic and fascinating, as if she knows how the world sees her and only appears to be helpless to do anything about it.

In this way “Alias Grace” blossoms into something beyond a tale of murder. Through Grace’s relationships with other women in her life, Gadon allows her character to quietly exhibit the toll a lifetime of abuse, dismissal and manipulation takes on a woman. Her brazen friend and fellow domestic Mary Whitney (Rebecca Liddiard) rebels against the constraints society binds her with, but even she eventually loses the fight. Grace joins the Kinnear household at the invitation of Nancy Montgomery (Anna Paquin) only to unwittingly find herself in a viper’s pit in which her ally is her tormentor.

The parallels between the series’ themes and the surge of #MeToo commiserating and resultant accusations lobbed at powerful men are obvious, but given that Atwood’s novel was published in 1996 that’s more of an indicator of the ways the power dynamics between the genders haven’t changed all that much.

Gadon’s extraordinary performance is matched by those of her co-stars; Paquin, all sugar and icicles in one swoop, is especially good, as is Zachary Levi as Grace’s friend Jeremiah, a traveling salesman and something of a benevolent trickster as well.

And his presence adds to the complexity and ambiguity of Grace, and her story. Dr. Jordan’s task is to determine Grace’s innocence or guilt; whether he’s able to do that — and whether he’s truly correct — ultimately becomes of little consequence. The truth of “Alias Grace” is that all of us enjoy being seduced by a manipulation under the right circumstances. Grace Marks is long gone, faded into to history. But the curious magic of her honest deceits remain ours to puzzle over.