The "Seinfeld" co-creator's failed "SNL" opener is more evidence of a comic unable to update his views...or his act 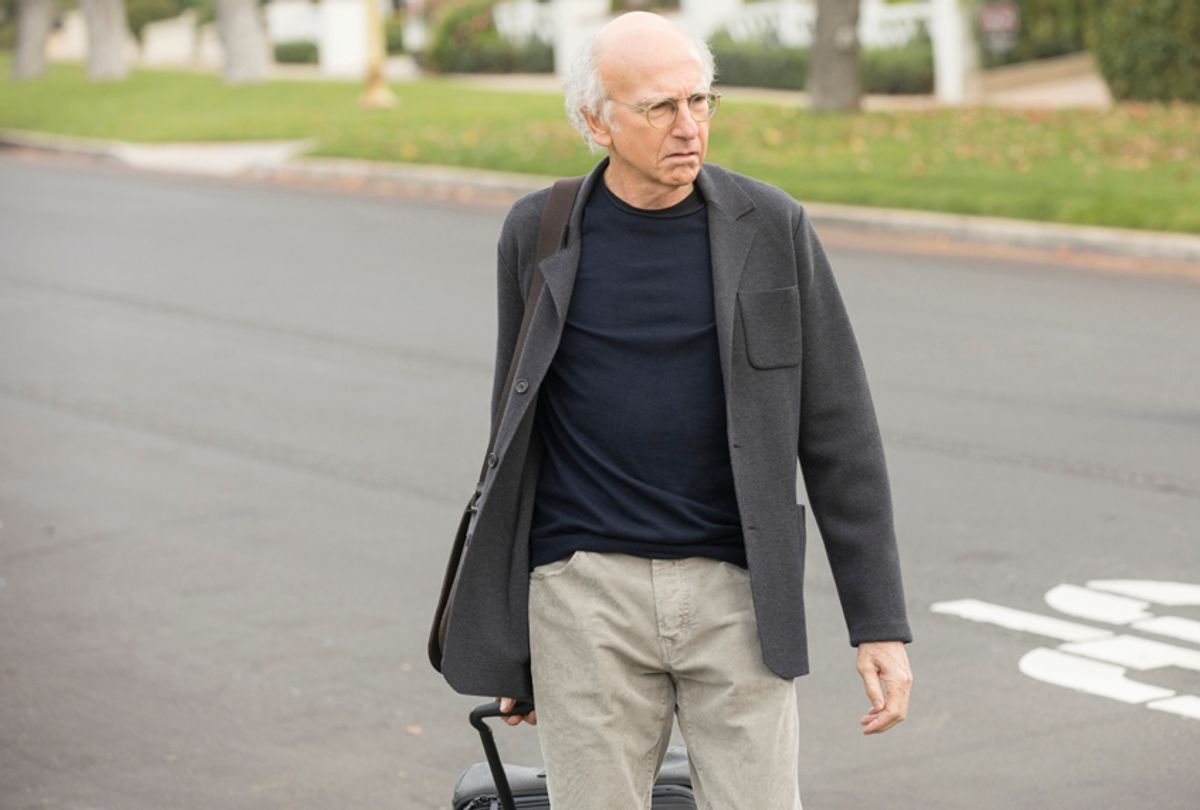 Larry David's tale about his desperate days before "Seinfeld" is woven into his myth by now, not to mention one of his favorite bits. Off the top of my head, I can think of at least three times I've either heard him tell the story in person or read it in a published profile, usually linked to the resumption of a season of his HBO series "Curb Your Enthusiasm."

David told it on "60 Minutes" in 2004, and he told it to Charlie Rose in 2015. He used it to open the now-famously terrible monologue he delivered as the host of November 4th's "Saturday Night Live." Since "Curb" first premiered in 2000, he's told the story so many times that he can probably mumble it verbatim in his sleep (potential dates, beware). Although the delivery varies, the basic version goes something like this:

When I was living in New York and didn't have a penny to my name, I would walk around the streets and occasionally I would see an alcove or something. And I'd think, that'll be good, that'll be a good spot for me when I'm homeless . . . I was planning on my future as a homeless person. I had a really good spot picked out.

From his own reporting, the man who co-created one of the most influential series in the history of television was a breath away from sleeping under yesterday's newspapers in Manhattan.

David's frequent return to his own rags to riches legend serves several purposes, topmost being its usefulness as a tool used to establish empathy with his audience. Sure, he has an estimated net worth in the ballpark of $500 million, according to Rose's 2015 report, but that ragtag story is his way of reminding us that he's still a slob like the rest of us, albeit one who happened to stumble upon Easy Street.

It played well in 1998, when "Seinfeld" went out on what producers hoped would be a high note. But a lot has happened in the two decades since, including drastic cultural, social and political shifts within the last two years alone. Meanwhile David's schtick, embodied in the ninth season of "Curb" currently airing Sundays at 10 p.m., has barely changed at all. His fictionalized self remains a solipsistic nightmare who stomps on polite conventions that would be simple enough to observe if only to keep the peace. He's a callous, inconsiderate ultra-rich mansion dweller who can't be convinced that he's wrong. He doesn't leave his immaculately landscaped enclave if he can help it, and when he does, he ends up offending just about everyone with whom his path crosses.

While there's a case to be made for such a character being perfect for an era dominated by aggressive narcissism and violent rebellion against political correctness, as David's "SNL" performance showed us, whether it works depends on the material and the delivery.

The retelling of this origin tale on "Saturday Night Live," and every flaccid attempt at topical humor that followed — his out-of-tune attempt to riff on the Harvey Weinstein scandal and the #MeToo movement, his deeply unfunny attempt at Holocaust humor in an era when anti-Semitism is surging in the United States — are further examples of a performer who is out of his depth and out of his time.

This has been on display for weeks on "Curb Your Enthusiasm," which returned in early October following a six-year absence, imposed, somewhat impishly, by David himself. You can't blame the man from giving HBO and the critics what they asked for; ever since the eighth season ended, David has fielded the question of when he'd bring the show back. He'd squawk an ambiguous one-liner response and that would be that.

But in those six years, a number of series that could be thought of as descendants of "Curb" rose to prominence. In the realm of so-called "cringe" comedy, "Broad City," "Girls" and "Difficult People" stepped in to fill the void, while modernizing and molding the discomfort in which David trades to suit current sensibilities. Its characters, like David's Larry, thrill viewers with comedy that springs from a stunning lack of awareness and utter selfishness. Unlike Larry, they all live in the world the majority of its audience shares.

The best David can do is attempt to get us to recall our affection for ancient observational humor without exhibiting an intimate awareness of the world we're living in right now. Not only does it make him seem out of touch, it's just lazy. Take the opening bit in the "Curb Your Enthusiasm" episode that debuted after the "Saturday Night Live" debacle: Larry misses his plane by seconds but scores an aisle seat on the next flight. He's demonstrably upset that he can't get a seat in first class, even though it's clearly empty, and brays at this injustice as he jockeys for a spot for his luggage in the overhead bin.

Then he must suffer the indignities of having to accommodate a passenger taking up too much space in the center seat. She claims to have an overactive bladder, so he switches with her. You can guess where it goes from there: She proceeds to file her nails, brush her hair and cough.

Many of us are familiar with the horror stories in coach. Many more may never sit in first class. But a worse crime than the classist undertones in Larry's bit, which we're asked to find funny, is the fact that a version of this scene has been done countless times on numerous series with greater success — including past episodes of "Saturday Night Live."

Depending on the context, however, the "Curb" conceit still works. Larry's inadequate condolences offered to his friend Richard Lewis in a recent episode, regarding the death of Lewis' parakeet, stuck the landing splendidly.

I don't even have to recreate the scenario for you to envision why that turn was a winner. All that's required to relate is a quiet sense of being fed up with the rise of "furry baby" coddling, that tendency for Westerners (and Americans in particular) to anthropomorphize their pets and to demand the same level of emotional regard from others. That nonsense has gotten out of control fairly recently, certainly within the six years that passed between the eighth and ninth seasons of "Curb," and is a ripe plum ready to be sliced and ridiculed.

However, this is one bit in a series that lost its urgency to innovate years ago.

Admittedly, David has fans who are likely to scoff at this opinion of his style and "Curb."  The new season enjoyed enthusiastic acclaim from critics upon its return and has an impressive rating on Rotten Tomatoes. Who am I to argue with the TomatoMeter?

The ratings tell something of a different story; the weekly Nielsen ratings for "Curb" have dropped by more than 45 percent this season to date, since its ninth season premiere. The new season is averaging just shy of 1.1 million viewers, in comparison to the eighth season's average of 1.99 million (It's also still drawing a larger average audience than "Veep" and "Silicon Valley" did during their most recent seasons).

Asking a performer to be something that he isn't, isn't completely fair, I'll admit. David has constructed his career and wealth portfolio out of writing curmudgeons and behaving like one, beginning with his "Seinfeld" stand-in George Costanza and shuffling, even now, through "Curb" and the movie he did during its hiatus, "Clear History." But even Jerry Seinfeld and Jason Alexander, the actor who sold George to audiences, have presented different versions of themselves to audiences while remaining true to the core of who they are as performers. They move with the times in ways that David does not, and his refusal to do so rusts the edge of his wit.

Maybe. But for how much longer?