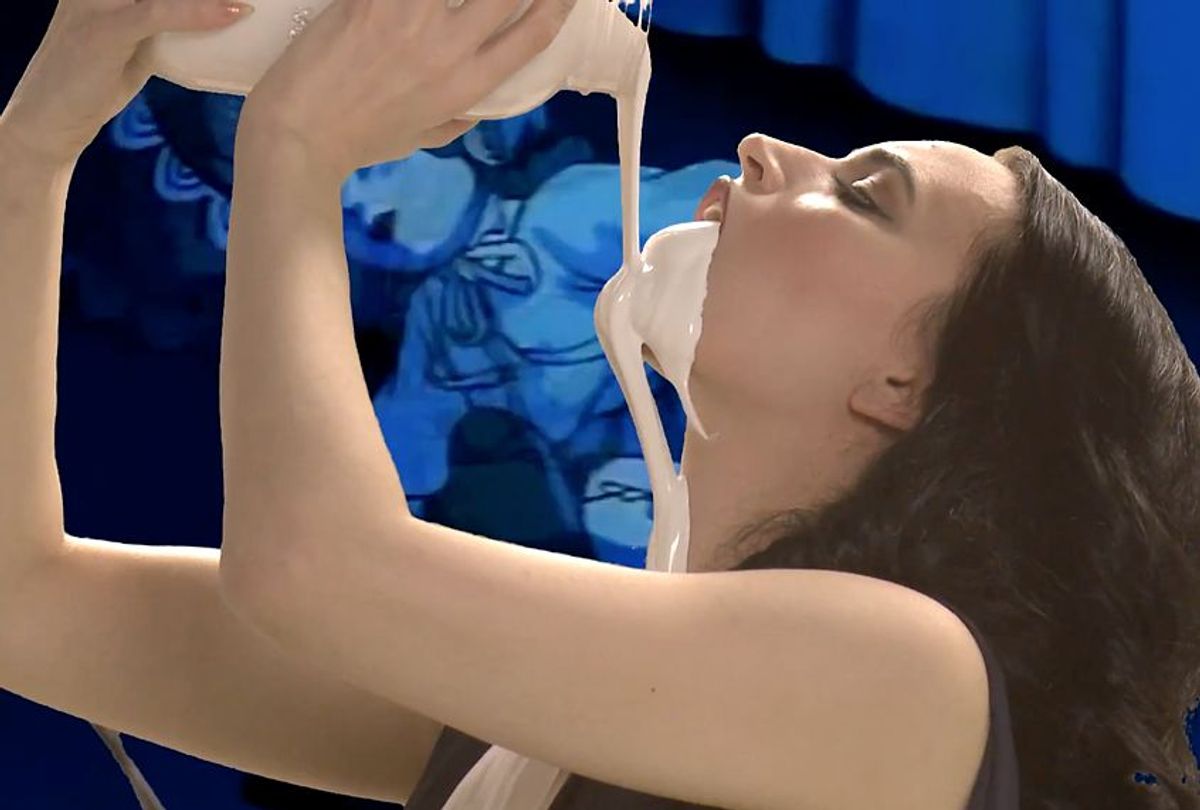 For many decades, conservative media outlets were known for offering a blend of Christian-style moralizing and anti-government rants. Donald Trump’s conquest of the Republican Party, based on a platform of lies, conspiracy theories, and coded appeals to racism has changed all that.

Much of the political press has focused on the emergence of Breitbart News, the online publication once again headed by former Trump adviser Steve Bannon, as the voice of a new pugnacious nationalism eager to defy social and political taboos. But it's not alone. The Daily Caller, Breitbart's leading rival in the right-wing online space, has undergone a similar transformation.

The Daily Caller’s genesis dates back to 2009, when its founder, the writer and television host Tucker Carlson, made the argument that conservative journalism was too sloppy with facts, and overly focused on opinion and commentary rather than reporting.

In a speech to the Conservative Political Action Conference that year, Carlson proclaimed the New York Times as a model for the right, even though he saw it as horribly biased. “It’s a paper that actually cares about accuracy,” he said. “Conservatives need to build institutions that mirror those institutions.” The audience literally began booing him.

“At the core of their news-gathering operation is gathering news," Carlson argued. "And conservatives need to do the same.”

Early in its existence, the Caller actually had some news scoops exposing the misdeeds of both Republican and Democratic elected officials. But according to people familiar with the site's operations, editors decided to push a more strident right-wing line in order to drive traffic numbers, even as the Caller continued doing original reporting.

Carlson became less involved in the site's editorial operations as his TV career at Fox News blossomed. Last year, as a condition of being named host of a daily program, Carlson backed away from the Caller entirely into a passive role with no control.

Carlson’s decoupling from the Caller coincided almost perfectly with the rise of Donald Trump from WWE sideshow to head of the Republican Party. It also corresponded with the emergence of the “alt-right,” the overtly racist fringe movement that has rapidly made inroads among young conservatives.

National Review, long the flagship publication of the conservative mainstream, has published several articles denouncing the alt-right, including a piece this August discussing how “campus conservatives gave the alt-right a platform” with no serious political aim other than provoking angry responses from liberals.

Without strong oversight from experienced journalists, the Daily Caller has drifted into a strange hybrid state, where conventional journalists work alongside far-right activists, several of whom have clear ties to white nationalism. Nothing makes this clearer than the peculiar story of Martina Markota, a former stripper and burlesque dancer who has been making videos for the site since September.

Markota’s rise to pseudo-stardom illustrates a number of overlapping phenomena, foremost among them the right-wing media's relentless hunger for conventionally attractive young women to serve as its public faces or spokespeople.

Whether Markota is a true believer in the alt-right cause or an entrepreneur exploiting a market opportunity is not entirely clear. But she has ties to various extremist figures, including exiled Breitbart News commentator Milo Yiannopolos and Vice co-founder Gavin McInnes, who more recently launched the Fraternal Order of Alt-Knights, a would-be paramilitary group for men “comfortable in fisticuffs.” McInnes has consistently denied being a racist, an anti-Semite or a member of the alt-right, but has a long history of making dubious "jokes" that appear designed to appeal to the far-right fringe while maintaining some level of  deniability.

In interviews, Markota’s former associates in the burlesque world say she was always regarded as a conservative, but began to go much further with the emergence of Trump in the 2016 Republican presidential race.

“She would say stuff that was anti-feminist and we just thought it was kind of disappointing,” said one person who knew Markota in her burlesque career. “It wasn’t until Trump that she started becoming more and more radical and bringing it into the locker-room.”

“Being around McInnes and his crew kind of radicalized her, because she was getting so much more attention than before,” another former colleague said.

People in the small and close-knit world of burlesque became concerned about the things Markota was saying or posting on social media. They began circulating some of her more inflammatory social media posts privately. Her appearances on McInnes’ former web video show also alarmed some people who knew her, particularly a clip in which Markota appears to laugh when McInnes jokingly refers to trans people as "gender niggers." The burlesque world features many LGBT performers and has been broadly supportive and inclusive in terms of LGBT rights.

Markota did not respond to multiple inquiries for this piece. She has insisted elsewhere that she is not racist or anti-Semitic, and has also written about her admiration of Dennis Prager and Ben Shapiro, two conservative talk show hosts of Jewish descent.

"They are saying im a nazi, white supremacist and kkk," she wrote on Twitter in August. "All those thing are false and damaging to my career."

Despite her denials, Markota's social media postings indicate a significant degree of comfort with people who disseminate extremist or racist views on the internet.

A month before denying she was a Nazi, Markota told a Twitter fan that she "liked" Lana Lokteff, an openly fascist internet video host who is regarded as a role model by many women with alt-right sensibilities. She has also railed against "biology deniers," a likely reference to a common far-right complaint that progressives ignore "race realism," meaning what they regard as the scientific superiority of some races to others.

Some of Markota's burlesque colleagues were troubled by posts she made endorsing a bizarrely racist "Little Mermaid" parody song that refers to Hispanics as "wetbacks" and Jewish people as "trolls." In Twitter and YouTube postings, Markota wrote that the video clip was "hillarious" [sic]. Burlesque community members also noted a meme she posted that joked about "white power" in the context of the children's Power Rangers franchise.

As word of Markota's postings began spreading among her former colleagues she appeared to move further to the right, turning to Yiannopoulos and others for support as she found it increasingly difficult to book dancing gigs. She tried to return the favor by promoting her new friends, including a July 31 tweet in which she referenced Yiannopoulos talking about "the JQ," alt-right slang for the "Jewish question."

"Social justice warriors are creating a new generation of fascists," she wrote in September 2016, using an insult frequently employed by conservatives against left-wingers they see as intolerant. "I have extreme SJW in my industry it's the reason I'm so right wing."

Markota also lamented on the far-right social media network Gab that liberals were making it difficult to have controversial viewpoints. "Why does the left have to ruin everything? The #altright was fun until it got outted," she wrote.

In August, she reached out to the alt-right board /pol/ for dance routine ideas. She eventually settled on one entitled "Milk Is Racist," an apparent tribute to a racist chan meme that mocked celebrity Shia LeBeouf and referred to the mistaken belief that people of African ancestry are more likely to be lactose-intolerant than people of European descent.

In addition to booking her performing gigs through far-right political channels (she appeared as a "jihadist" at a party hosted by Yiannopoulos), Markota also began to pursue other opportunities, including posting news and political commentary in a blog or on YouTube.

Markota's efforts paid off in September when the Daily Caller began paying her to appear in daily news videos to accompany some of its articles, perhaps in preparation for hosting a program of her own. This certainly seemed to fit the Caller's business model. During Carlson's tenure, the site became known for prominently featuring celebrity content unrelated to politics, especially stories that featured women in swimwear.

Since Carlson's departure, the TMZ-style celebrity coverage has tapered off. But the Caller has become notably more open to writing from avowed members of the right-wing fringe, including Jason Kessler, organizer of the now-infamous "Unite the Right" rally in Charlottesville, Virginia, on Aug. 12 which ended in the death of a leftist counter-protester.

(In July, Markota used the term "Unite the Right" in a July Twitter request to McInnes on behalf of Tim "Baked Alaska" Gionet, an alt-right personality who has repeatedly praised Adolf Hitler and the Nazi regime.)

The Daily Caller has also published articles by Peter Brimelow, a veteran conservative author and editor who was fired by National Review years ago for his racist views. The site also employs Scott Greer as its deputy editor, despite his friendship ties to a number of white nationalists.

The publication attracted renewed controversy in November after it announced a short-lived deal to publish columns by Yiannopoulos after he had become too toxic for Breitbart News.

In interviews, several former Daily Caller staffers said these and other decisions had made them so uncomfortable that they sought employment elsewhere.

Reached via email, editor-in-chief Geoffrey Ingersoll said that sharing controversial content online did not make one a neo-Nazi.

"I like President Xi, does that make me Chinese?" he responded when asked about Markota's expressed admiration for fascist vlogger Lana Lokteff.

Ingersoll defended some of Markota's other postings as well. "She shared a goofy video about the alt right," he said. "That does not make her alt right or racist. Meeting Baked Alaska once doesn't either."

Tucker Carlson, the Daily Caller founder, declined to comment for this story.

Whether Markota stays at the Caller or goes elsewhere, she has discovered a market niche in the high demand for female right-wing media personalities. “My partner is always teasing me about how I should switch sides, so we can get rich,” one left-leaning female political commentator told me earlier this year. “I think the audience for these tokenized pundits is mainly white male conservatives, who need to tell themselves that they aren't actually misogynist or racist."

"Martina has always just wanted attention," said one of her former burlesque colleagues. "And ever since she hooked up with Gavin McInnes, she's gotten that. It's a much smaller audience, but it's a very loyal one."