Trump's terrible NASA nominee and the GOP attack on science

Jim Bridenstine, Trump's choice to head NASA, is only the latest symptom of Republican contempt for science 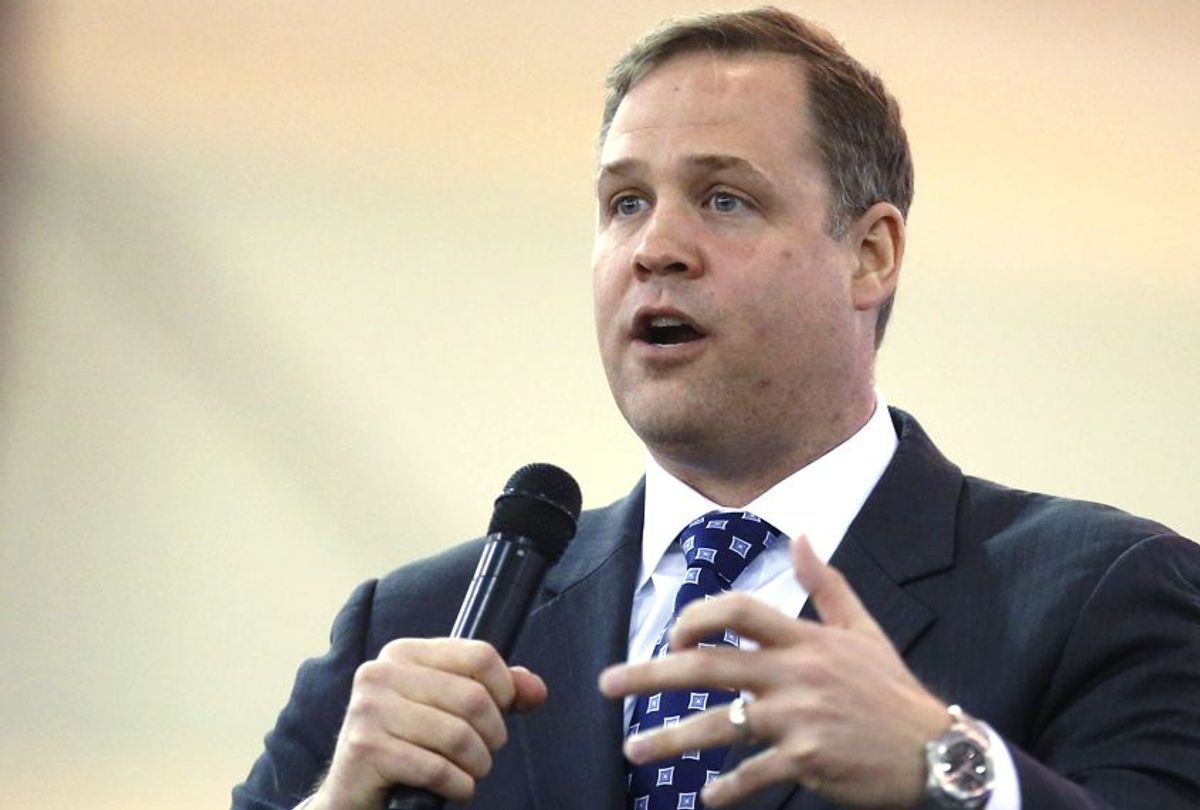 As reported last month at Salon, Donald Trump's pick to head the National Aeronautics and Space Administration (NASA), Rep. Jim Bridenstine, an Oklahoma Republican, has a history of climate change denialism. Last week, at his confirmation hearing before the Senate Commerce Committee, Bridenstine, who would become the first elected official to hold the job of NASA chief, made clear that he continues to reject the basic facts of atmospheric science, which is a huge part of NASA's work.

"During the hearing, Bridenstine said he 'absolutely' believes in climate change, that it is already having devastating effects and that humans contribute to it," reported the Washington Post. "But he demurred when asked whether human activity was the leading cause, saying more study was needed."

This move — claiming to believe in climate change while sowing doubt about its origins — is just the latest iteration of a conspiracy theory that Republicans have promoted for decades. Whether expressed in these terms or not, the idea is that human-caused climate change is an anti-capitalist hoax, perpetuated by literally millions of conspirators and all governments across the globe. Bridenstine's rhetoric (which has also been employed by Scott Pruitt, Trump's EPA chief) just an attempt to make that ridiculous myth sound slightly more reasonable.

Despite Bridentstine's track record of science denial, if not outright conspiracy theory, his nomination was approved on a straight party-line vote on Wednesday, with all the Democrats on the committee opposed.

“This is a nonpartisan science agency,” said Sen. Brian Schatz, D-Hawaii. “The scientific consensus is that climate change is real, urgent and caused by humans. This science should be both supported and understood by anyone who hopes to lead NASA, one of our nation’s top science agencies."

“Being anti-science and being anti-climate science in particular has become a litmus test for Republican candidates across our country, John Abraham, a professor of thermal sciences at the University of St. Thomas, told Salon. "This pick is part of a larger effort by the Trump administration to blind ourselves to many of the issues that confront our country and our world."

This starkly partisan vote for Bridenstine is a reminder that the problem with our federal government right now goes far beyond Donald Trump. While the president soaks up the media attention and prolifically spouts conspiracy theories about climate science and virtually everything else, his attitude — that you can just believe what you want to believe, and not what the facts tell you — runs throughout the entire Republican Party.

“The reason it’s become political," Abraham said, "is because many people on the right side of the aisle just can’t admit that Al Gore got it right and that liberals were right."

Bridenstine's comments indicate that he believes the NASA scientists he will now oversee are either part of a vast conspiracy to lie about the causes of climate change or are dupes of that conspiracy. That puts him in a hostile relationship with the very people he's supposed to manage — though in the Trump administration, that's usually viewed as a bonus, after years of right-wing media portraying government employees as useless parasites.

NASA tends to be associated with space exploration, so it may not be apparent why it's such a problem to have a climate-science denier as the agency's chief. But the agency actually does a significant amount of work in helping advance climate science. As the Nasa Climate Twitter feed slogan puts it, "Rocket science isn't enough; we're climate scientists, too."

"The agency's research encompasses solar activity, sea level rise, the temperature of the atmosphere and the oceans, the state of the ozone layer, air pollution, and changes in sea ice and land ice," the NASA site explains. Climate research is intertwined with the space exploration program, as NASA satellites and research missions collect data that is used by climate scientists. NASA data was central, for instance, in helping the Intergovernmental Panel on Climate Change reach its conclusions about the nature and causes of climate change.

Of the $5 billion that NASA requested for its 2017 science budget, $2 billion was earmarked for earth science. NASA spends more studying the planet we live on than it does on studying other planets or launching spacecraft.

But the Bridenstine pick isn't just about paranoid hostility to widely accepted facts about climate change. It's yet another indicator of Trump's contempt for the core principles of science, and the eagerness of far too many Republicans to go along with this anti-science ideology. As a general rule, NASA chiefs have been people with significant experience in the work done at the agency. Obama's NASA chief, Charles Bolden, was himself an astronaut who has been into space on multiple missions. Although George W. Bush's NASA chief, Michael Griffin, was known to engage in climate denial, he was a qualified aerospace engineer with a background in physics.

“If you don’t have a science or engineering background," Abraham explained, "it’s very difficult or impossible to understand the technical complexities of the main mission of an organization like NASA."

Jim Bridenstine has no scientific or engineering background at all. He holds an MBA from Cornell and was a business major as an undergraduate. He served for a time as executive director of the Tulsa Air and Space Museum & Planetarium, but that was an administrative position that required no advanced knowledge of math or science.

The Bridenstine nomination is strongly reminiscent of Trump's ill-fated choice of Sam Clovis as chief scientist at the U.S. Department of Agriculture. Clovis also a climate-science denier with no relevant experience in either science or agriculture. He had taught business school and hosted a conservative talk-radio program in Iowa before going to work for Trump. While Clovis was ultimately forced to withdraw from consideration, it wasn't because his very existence is insulting to actual scientists, but because of his (tangential and bizarre) involvement in the Russia scandal.

This pattern strongly indicates that Trump holds science itself in contempt. (The fact that actual science requires education and expertise probably makes him feel stupid, which he notoriously dislikes.) Trump clearly sees these scientific positions as opportunities to reward his supporters with paychecks, titles and offices, not as jobs important to America's future that need to be filled with qualified people.