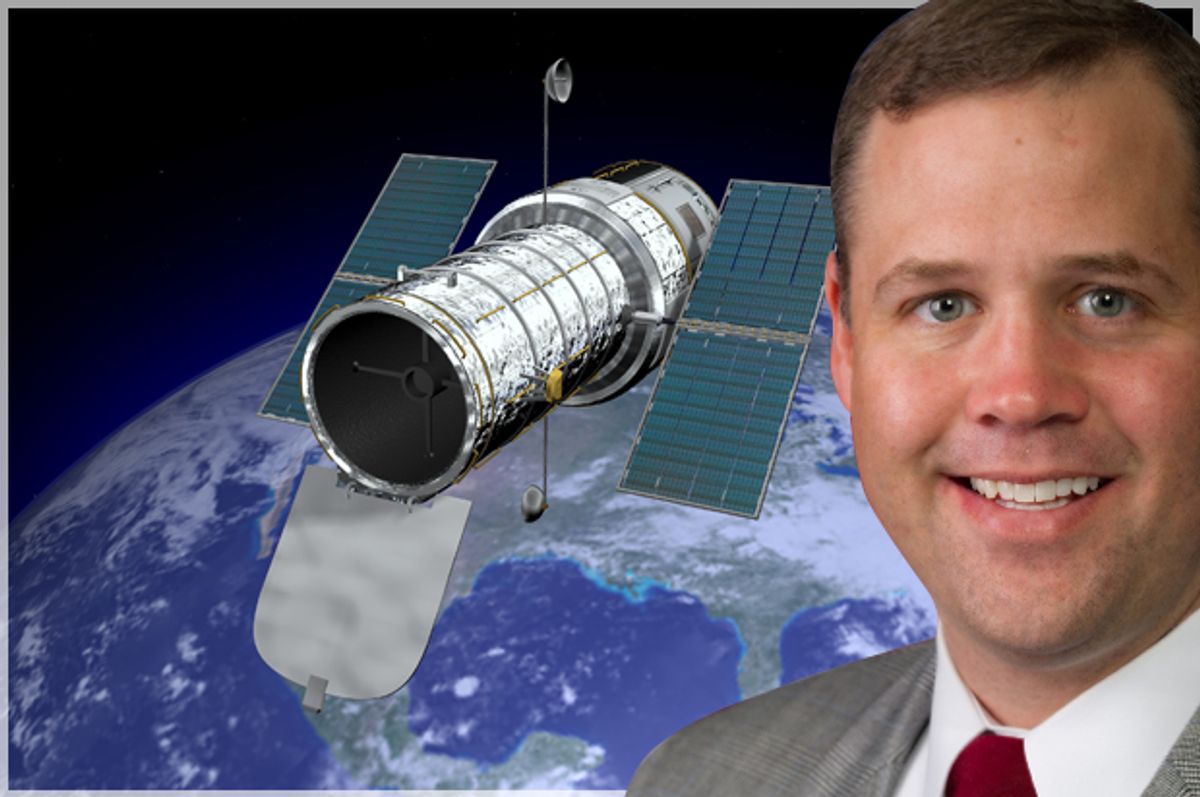 Say what you will about President Trump, but when it comes to his federal nominees, the man is remarkably consistent: He has a secretary of education who detests public education, a secretary of the interior who hates public lands, a housing and urban development secretary who despises public housing, and a labor secretary who "has a lifetime of anti-union and anti-worker positions," according to professor Eric Loomis. Not a man to break a streak, the president has nominated Rep. Jim Bridenstine (R.-Okla) for National Aeronautics and Space Administration (NASA) chief, despite Bridenstine's misunderstanding of the fundamental premises of science; in particular, climate science, the study of which is one of NASA's main functions.

When discussing climate change, Bridenstine uses a tactic perfected by the tobacco industry; specifically, the sowing of doubt to obscure science. The tobacco industry internally adopted the slogan "doubt is our greatest ally" in its efforts to hide that its products were killing thousands, which it achieved through sloganeering and PR statements honed to suggest it was unclear if the science was conclusive about tobacco's effects. In the same vein, Bridenstine once said that the climate “has always changed,” and noted “periods of time long before the internal combustion engine when the Earth was much warmer than it is today.”

"Bridenstine sparked controversy when he demanded during a House floor speech that Obama apologize for spending more on climate-change research than weather forecasting," wrote Christian Davenport in the Washington Post. "He also said that global temperatures 'stopped rising 10 years ago,' which isn’t true," Davenport added. Indeed, Bridenstine has a long history of misconstruing, denying, or misrepresenting climate science. As with many die-hard conservative climate change deniers, it is hard to tell whether he truly believes what he says, or if the cognitive dissonance — from the knowledge that industrial production in a free market economy is slowly making Earth uninhabitable  — is too much for his dogmatic synapses to bear.

Today, Senator Patty Murray (D.-Wash.) delivered a letter to the Senate Committee on Commerce, Science and Transportation expressing her deep reservations about Bridenstine as a candidate for NASA chief. "Given that NASA's fiscal year 2018 budget requested 1.8 billion for Earth-observing and climate science missions, Rep. Bridenstine's failure to accept fundamental scientific truths about Earth's climate make him an ill-suited and dangerous choice to lead the agency," she wrote. Sen. Murray also noted Bridenstine's extensive courting of anti-LGBTQ groups and his "history of supporting anti-Muslim groups" as further evidence that he was unfit for the role. "Rep. Bridenstine's denial of fundamental scientific facts and long record of bigoted and hateful statements run counter to [NASA's] legacy" of inspiration and curiosity, she wrote, urging the committee to oppose his nomination.

It is not merely Democrats who have expressed doubts over Bridenstine's ability to lead NASA. Some Republicans — notably Sen. Marco Rubio (R.-Fl.) — have expressed their own reservations. "I just think [Bridenstine's appointment] could be devastating for the space program," Rubio told Politico. "Obviously, being from Florida, I’m very sensitive to anything that slows up NASA and its mission... It’s the one federal mission which has largely been free of politics and it’s at a critical juncture in its history," Rubio added.

In general, the way in which the far-right has successfully sown doubt about climate change depends on certain rhetorical tactics that have redefined the way that we talk about climate change. In a July 2017 interview with Salon, outspoken writer and environmentalist Paul Hawken noted how the word "belief" had entered the popular rhetoric around climate change, despite that science was not a belief system. "People who listen to me are very involved with climate, and I'll ask them, 'How many people here don't believe in global warming and climate science, raise your hand?' And nobody will raise their hand," Hawken told Salon. "And what I say is you all should have raised your hand, because science is not a belief system, it's evidentiary."

Deniers believe that the Holocene period of climatic stability for the last 10,000 years will persist indefinitely, and there's not one scientific, peer-reviewed paper to support that belief, because it's not true. We shouldn't use the word "believe." It's a lack of awareness. I feel like when you know the science, you know where you stand, and that's a good thing.