In Trump's America, Blake Shelton is your "Sexiest Man Alive" 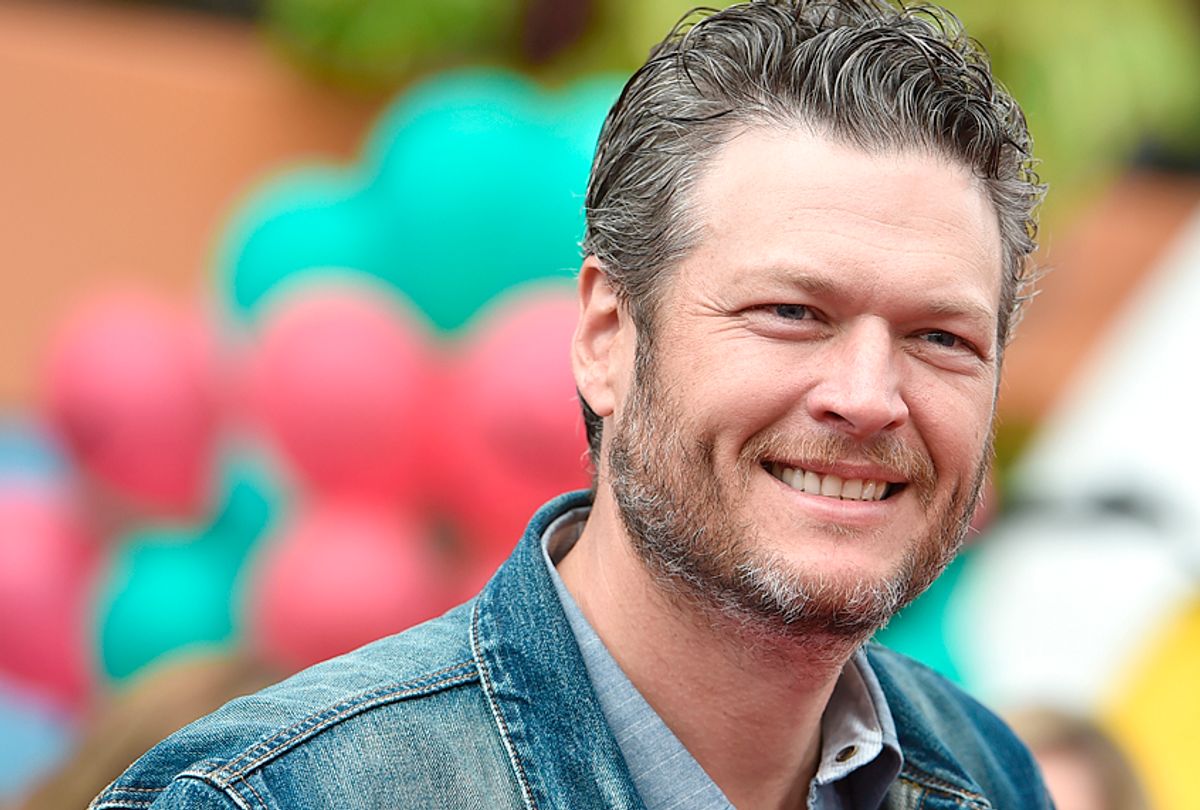 On Tuesday, People magazine announced that it was granting its hoary, issue-selling honorific "Sexiest Man Alive" to country singer and star of NBC's "The Voice," Blake Shelton. In response, the native Oklahoman said he couldn't "wait to shove this up ['The Voice' co-star Adam Levine's] ass.” Swell.

Regardless of how hollow the very idea of granting the title of "sexiest" anything to anyone at any time is — if beauty is in the eye of the beholder, sexiness is somehow even more so — it was a particularly problematic pick for the checkout-rack rag.

Shelton's specific, debatable physical charms and his bro-ish, recovering meathead comportment and personality are very much an acquired taste that has turned many, many noses as we've learned from the swift internet reaction to his installation as the nation's nominally hottest fella. That's a matter of personal apetites. Yet, there are there are significant cultural and political questions here — questions that have taken center stage following the election of President Donald Trump.

First off, Shelton, through no fault of his own, is the 27th white man declared by People to the the "Sexiest Man Alive." This would be fine except for the the fact that there have been only 29 men granted the title in total (while the honorific has been around for 32 years, Brad Pitt, George Clooney and Richard Gere have all won more than once). The profoundly charming Dwayne "The Rock" Johnson, whose parents are of black and Samoan descent, got the nod in 2016. The undeniably hot Denzel Washington, who is African American, was deemed sexiest in 1996.

At at time where inclusion is in the foreground — and under attack by the party that currently controls all three branches of government — and a rising generation of stars of color seems more relevant and, well, sexy within the contemporary cultural zeitgeist, it's an off-rhythm pick in the broader context. Of course, People has its own specific audience to cater to, one that may not care all that much for what the kids or the coastals talk about. Regardless, the decision to offer another white man two-inch headlines for being moderately okay in a few limited respects lands with a certain thud.

But none of that is specific to Shelton. His own history, however, is.

Shelton has used his Twitter account to forward some fairly unenlightened comments that show tendencies towards homophobia, sexism, xenophobia and other unsavory positions. He's expressed his desire for an underage Dakota Fanning, wished aloud that the person in the hotel room next to his would "learn some English so I would at least know what he's planning to bomb!!," and offered up the anti-queer jokes below.

None of these are particularly outstandingly horrible things compared to, say, white men walking through the streets of Charlottesville with Tiki torches chanting "Jews will not replace us," but they don't have to be. They're part and parcel of a long tradition of blithe, relaxed intolerance that assumes not only the worst of anyone who falls outside the norm, but presumes that everyone white, straight and male agrees with those assumptions. It seems People's choice for "the sexiest man" demonstrates a very unsexy easiness with, or unawareness of, the supremacy.

And then there's the overall problem that, y'know, maybe we're just not up for declaring any man — be he a puffy game-show host or lithe Oscar-winning actor — the "sexiest" at this present moment. Right now, there's just no escaping the damage some men do with their libidos. While, yes, most of us — men, women and nonbinary, queers and straights — still enjoy contemplating a good, sexy guy of own choosing in our own time and way, reinforcing standards of male desirability in the media is nauseating when accompanied by headlines that read "denies allegations of sexual abuse."

But there's a greater turn-off at work here.

All of the things we can see with People's pick — the reinforcement and celebration of sometimes-toxic cisgender male sexuality, the elevation of an underwhelming white man to a position of public acclaim, the ignoring of people of color, the positive positioning of a regressive personality, the top-down attempts to prescribe a series of cultural and social norms that are past their expiration date on a popular level, the privileging of "heartland" tastes and values, the trumpeting of a reality-TV star — are par for the horrible course in the America that voted Trump into office.

That's not to say Shelton, a roundly passable bro with some easy charms, is in any way as noxious or dangerous as our current commander-in-chief. But it's easy to say that at least some of the same impulses and systems that compelled the media to give Trump the coverage that helped get his campaign rolling are at play here.

Here there are echoes of the reactionary tendency of some conservative (or even mainstream) outlets and individuals to grab on to objectively underwhelming totems of the supremacy in response to progressive ideas and items that challenge the entrenched hierarchy with excellence. "Blackish" is a hit? Let's rally for "Last Man Standing." Trump is under fire? Let's vote for Roy Moore. Black people are beginning to dominate pop culture and the Rock was the "Sexiest Man Alive" in 2016? Let's all get behind the dopey, Walmart-approved Blake Shelton in 2017.

In that tendency is the frightening prospect that for every step forward America makes towards a better, more colorful, more accepting future, there's a looming regression not just to the mean, but to something even less worthy. Look at history of "Sexiest Man Alive" and you'll see that in our polychromic 2017, we're putting a crown on the least popularly attractive, least talented dude since the magazine chose Harry Hamlin in 1987 (and that guy's cheekbones could cut glass).

Okay, so maybe it's unfair to lay this all at the feet of Shelton and People. Maybe it's unfair to politicize this. Yet, the conservative-directed culture wars that gave birth to the Trump presidency have forced us all into a very unfair zero-sum game with clearly drawn sides. In it, the singer and the magazine may very well be on the wrong one.

Look, whether you think Shelton is fire in bluejeans or not, on these terms, his installment as America's official supreme plate of beefcake is no turn-on.