The little comedy that could: Why it took 10 years for "Cook Off!" to hit theaters 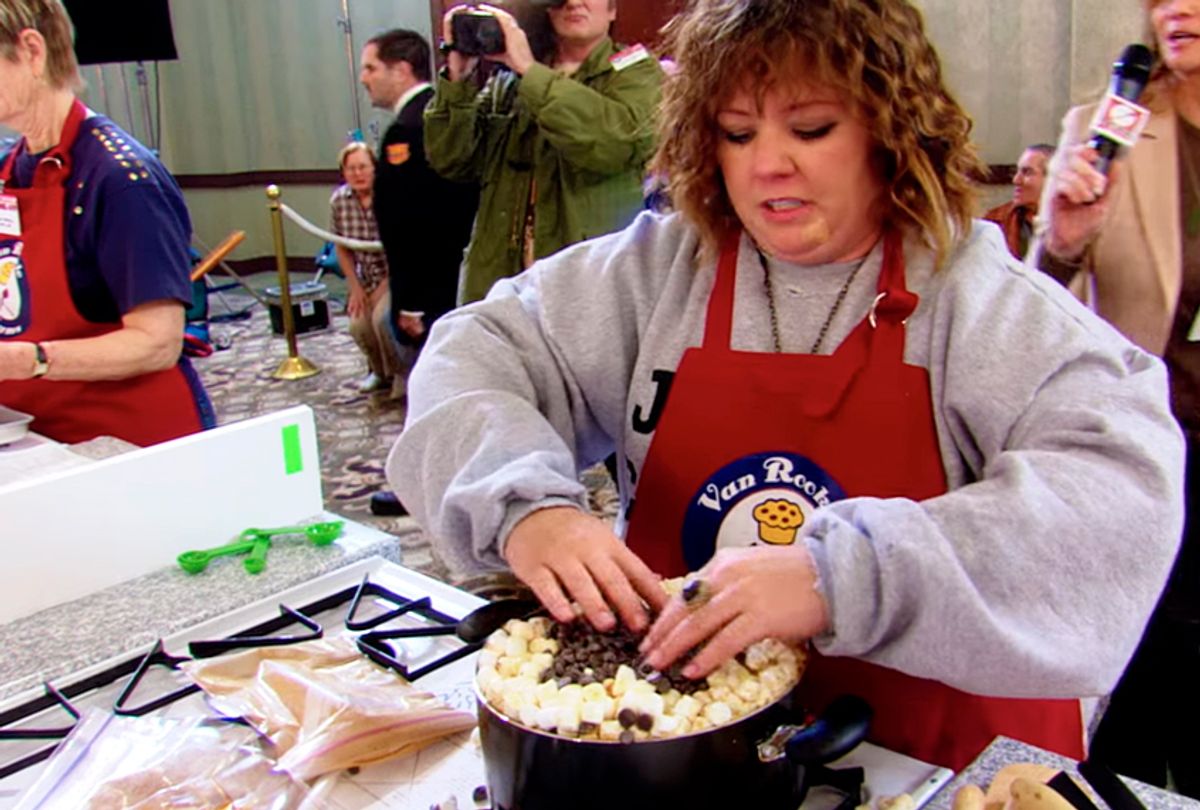 Melissa McCarthy in "Cook Off!" (Lionsgate)
--

Actress, writer, and filmmaker Cathryn Michon set out to make an ensemble comedy set in the quaint yet cutthroat world of an all-American amateur cooking competition. The end result featured a crackerjack cast including Wendi McLendon-Covey, Melissa McCarthy, Ben Falcone, Annie Mumolo, Diedrich Bader and Niecy Nash. It had a slapstick pace, a disarmingly charming central story about sisterhood and a production team with a refreshing amount of female representation. Cut to ten years later.

A decade after it premiered at the US Comedy Arts Festival, Lionsgate is giving "Cook Off!" a theatrical premiere on November 17, along with a VOD/iTunes release. But while the bulk of the film was made when George W. Bush was president and most of its soon to be famous cast was relatively unknown, its cheerful silliness is timeless. Yet behind the scenes, the story of female filmmakers enduring in an often brutal industry feels far more relevant.

Salon spoke via phone recently to Michon, who co-wrote, co-directed and co-stars in the film (and more recently was a screenwriter for "A Dog's Purpose"), about surviving in Hollywood and why she still has hope.

"Cook Off!" is so cute and fun and so full of just everybody. You watch it like, "Oh there's Jim Rash!"

An Oscar winner, and he's, like, got two lines, yes.

I've been telling people, "Don’t let the 10-year delay put you off!"

This is something that happens in independent film. One of our investors had a bankruptcy; the film got trapped in the bankruptcy. A good seven of the 10 years has been dealing with the federal bankruptcy court, lawyers and litigators. I mean it's not filmmaking. We premiered a rough cut of the film in Aspen in 2007, and then all this crap happened. The film had to be completely remade, because media was lost and stuff was gone.

We don’t even have iPhones in the movie!

No one is looking at their phones. No one's posting on Snapchat. It is a different world.

It's why I put in the title card that this was 2004 because, it really is. I wrote this memoir, and the part that we adapted for the film is about how I got trapped up in the world of cooking competition, which is this weird, crazy little subculture. And now with so many cooking channels and everything, it's become something everybody thinks they can do.

With the contest in our film, they're making stuff with refrigerator biscuits and canned meat and string cheese, so you think, "Well I could do that, right?" That's the appeal of that world. It's not like extreme rock climbing or something.

Right, all of us have a kitchen. Even when you look at the "Great British Bake-Off," where it's so much more technical and high pressure and high stakes, people are still like, "I'm just a home cook and I like baking cakes for my kids!"

One of the things that we did when we shot the film that I think was pretty brilliant — and part of why it was so hard to put the movie back together — is that we saw it like a reality show. All of the multiple things were shooting at the same time. And one of the instructions that I had given to the extras was that everybody had to be cooking all the time.

So we just went to the dollar store and bought the worst, cheapest food and had the extras pick ingredients, and come up with something to cook. They had to really strategize in order to make something. If you give anybody a bunch of ingredients and say at the end of this thing, you have to have something, they'll cook. They'll make something.

I'm still trying too get my head around what one does ten years later to freshen a film up and try to make a go of it.

The bones of this story were always really solid. and I thought that what I knew about these competitions, from having been in them myself, is that they'll kind of time capsule. It's not the most fashion forward group of hip individuals that get involved in this world.

I shot new footage. The whole thing of the title sequence looking like a crazy tasty video, and the title cards was new stuff to make it feel more like how people think about food now. There were a few things that we reshot, but nothing that was the bones of the story. It had to do with connective tissue and made the film, to me, look fresher or more current in terms of food.

I imagine you have a very wide array of responses from the people who participated in it originally. Are there people who are just like, "Great, finally, I'm really happy," and then were there others who were, "I need to forget this ever happened?"

I think all the actual creative people are pleased and happy, because I think they all love their work. Sometimes when you're dealing with agents and managers, they might have clients that have gotten famous and don’t really want to promote something which is when they weren’t. But everyone is so good in the movie that I think that no one needs to be embarrassed.

I love that line that my character has that denial is just a really negative word for positive thinking. I have taken that line to heart over this process over many years. I just thought, this is a great little slice of Americana, and if the movie is about something larger, it's about how are we willing to compromise ourselves to make some great leap forward or who we are in the world and all of that.

Working in the industry, in one very specific way, it feels like we are at some kind of a watershed moment. Not just in entertainment, but for women in general, in the workplace and in the world, where we have greater representation and we are taken more seriously.

I tend to be irrationally optimistic; that's the only way you get moving across a finish line like this. I wrote a piece that was in the Huffington Post about this. It's basically an open letter to Bob Weinstein suggesting that he do penance, and that the only way to save his soul and company would be going forward with the Weinstein company [and] do nothing but hire women directors.

In show business, part of the problem is that in filmmaking the director is absolutely the boss. When you have only 4 percent of studio feature films being directed by women, you've created a culture that fosters this environment. It would take a radical action at that company to cleanse themselves of the 30 years of what they'd been doing. There was a great piece written by Nate Silver, about a 13-year study of something like 1,600 films to determine that when a female character is important or the most important in a film, it's more profitable.

In my letter to Bob, I said, "By the way, if you're going to be only hiring women directors, you're just going to make more money. So I'm helping you; this is business."

My management style on both films I've directed is, I'm collaborative. I'm not the person who storms off set, or starts barking orders; I have to cajole and plead. You don’t go into that being an asshole, because the only way somebody is going to help you put together a film, where it's ten years now from when it was shot, is to have it be like the most fun film to work on ever.

It's a real testament to your optimism, Cathryn.

I'm so happy when I'm on a film set. All these people come together to make something out of nothing. If that's not the most optimistic process, I don’t know what is. I think I'm in the right business to be a cockeyed optimist. I think anybody that makes movies has to be.

This movie has had of a lot of hard lessons in making it. Nobody should take ten years to make a movie, it's absurd. It's not the way to do it. Just literally never quitting and never saying never, and getting other people to join in and believe in that has taught me a lot about life. I keep my eye up what I'm trying to create, and what I'm trying to accomplish, and where I want the world to be, and how I want the world to regard me as a woman. I just can't go back from that.