Is this a "sex panic" or a national moment of reckoning? Can’t it be both? 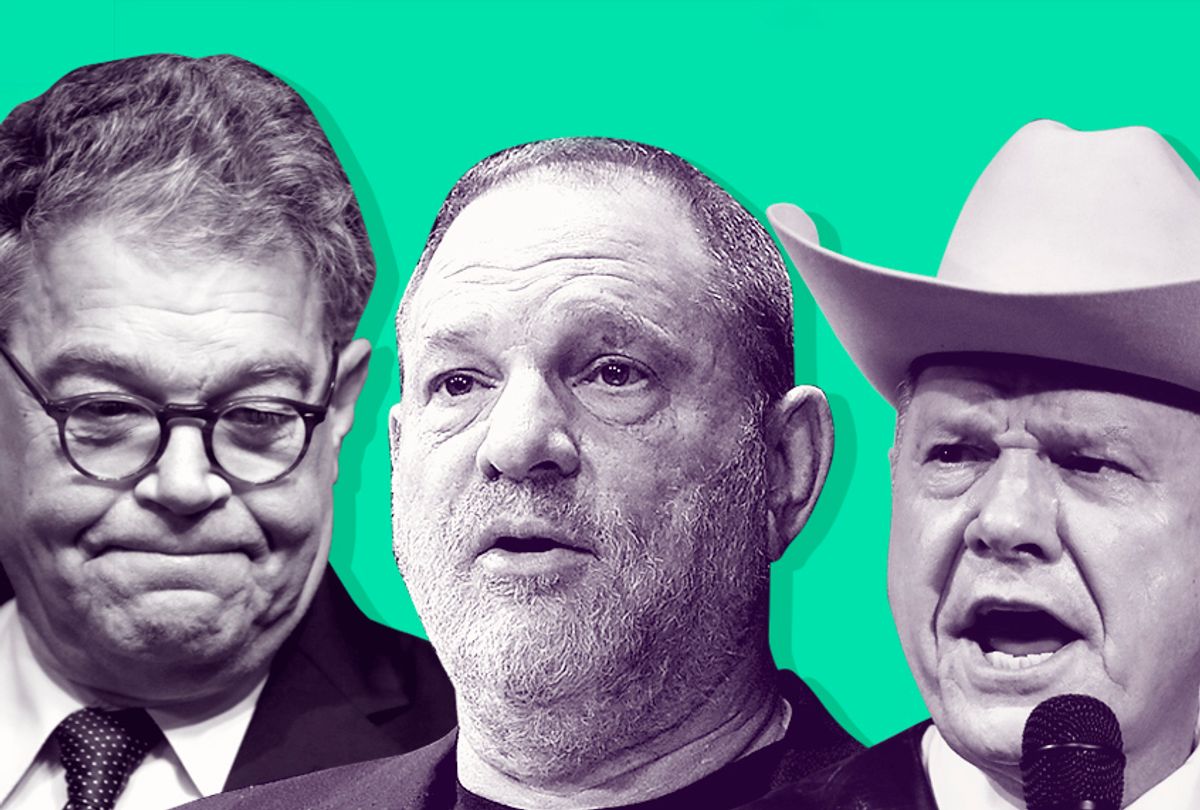 As this strange moment of collective, percussive awakening has unfolded over the past few weeks, beginning with the revelations about Harvey Weinstein’s long career of apparent depraved sexual misconduct, it has become almost impossible to keep up with the litany of accusations and the cast of characters. At the very least, we have moved from situations that, to most people, seem relatively clear-cut into territory that, in both legal and moral terms, is more ambiguous.

We have also moved from troubling questions we can at least try to answer to more difficult ones that may have no clear or agreed-upon answers. As I wrote a few weeks ago, the “Weinstein moment” created a painful opening for men (and some women too) to ask ourselves why we tolerated or excused this kind of behavior for so long, and what responsibility we had for enabling it. I covered the movie industry, on and off, for 20 years; I heard the rumors about Weinstein, about Kevin Spacey, about Brett Ratner. Everybody did. But I didn’t know those men, except in a severely limited professional context. They were “sleazy guys,” but I never looked into it or really even considered doing so. It wasn’t my problem.

As it turns out, this was my problem all along; it was all of our problem. Now that problem has escaped from Hollywood and boiled up withe a vengeance in an even more artificial universe of make-believe: American politics. With the very different but unhappily parallel cases of Roy Moore and Al Franken, we are not just confronted with questions about the shifting boundaries between permissible and impermissible sexual conduct, although that’s part of it. Was Moore’s shopping-mall creepazoid behavior “normal” for Gadsden, Alabama, in 1977? Was Franken’s lecherous photo bomb with a sleeping Leeann Tweeden just a misbegotten joke between comedy comrades? To frame the question in bigger and more pretentious terms, what do we know about human sexuality and gender relations, and how do we know it?

In a thoughtful column published earlier this week, New Yorker writer Masha Gessen wondered whether the post-Weinstein “watershed” in America’s sexual history risked becoming a “sex panic.” Over the past 30 years or so, she writes, “as American society has apparently accepted more open expression of different kinds of sexuality, it has also invented new ways and reasons to police sex.” Gessen is especially harsh on the “affirmative consent” rules used to govern sexual activity on many college campuses, which serve “both to criminalize bad sex and trivialize rape.”

Following on from Gessen, Erin Gloria Ryan of the Daily Beast wrote this week that she fears the possibility that one false accusation could torpedo the #MeToo moment because, in the warped worldview of the American right, “to discredit one woman is to discredit all of us.” A sizable subset of the population believes that “woman are all liars” when it comes to sex and sexuality, so “that one liar will fuck it up for all of us.”

These are real risks. Hovering over all this is the disastrous 2014 Rolling Stone article about an alleged rape at a University of Virginia fraternity house, which was somewhere between terminally sloppy and entirely false. Rape on campus continues to happen, of course, and the vast majority of reported rapes really occurred, as is true with other kinds of crime. But that story was not true, and it played to the deeply ingrained stereotype that Ryan mentions, the idea that women are emotionally unreliable and sexually untrustworthy. As a national issue, campus rape was indelibly tarnished, and media coverage virtually disappeared.

There’s definite moral hazard involved in writing about this issue as a man; as Ryan points out, it is women who will suffer the consequences if the #MeToo moment devolves into a “sex panic” or a puritanical witch hunt. Nonetheless, I’m inclined to think that the national reckoning we are now undergoing, and its obvious potential for backfire or implosion, are aspects of the same phenomenon. That being that in the United States of America we have no shared understanding of what is true anymore, and can barely agree what day follows Tuesday.

American public discourse has become so polarized that there is almost no such thing as undisputed fact, and the relationship between events and consequences often seems to obey an upside-down dream logic. As Gessen details in her New Yorker column, Hillary Clinton staffers apparently held a boisterous celebration after Donald Trump’s infamous “grab them by the pussy” recording was revealed last fall: Surely this appalling person had finally been rendered unelectable!

As we can see now with the bitter clarity of hindsight, that reflected a fundamental misunderstanding about the nature of the alien planet where American politics now take place — and it was the same misunderstanding that would doom Clinton to defeat. If anything, Gessen suggests, the pussy tape may have solidified support for Trump among conservative women, who largely shared the view (based on ample empirical evidence) that men are just like that, producing the apparently incomprehensible result that he won a majority of white female voters.

In that context, it may be foolish to imagine we can ever reach rational consensus on inherently fraught and profoundly political questions about sexual relationships and sexual behavior. “Liberals” and “conservatives,” two words that themselves barely mean anything anymore, don’t even speak the same language or share the same understanding of reality.

Things were different back in the glory days of bipartisan comity, by which I mean, oh, four or five weeks ago. Oh sure, some right-wing trolls and anti-Semites gloated over Harvey Weinstein’s downfall, and there was an awkward 24 hours of silence before Bill and Hillary Clinton realized they had to cut him loose. But the cases of Weinstein and Kevin Spacey, the first two major villains in this drama, may have been shocking but were not especially confusing.

Both men have been accused of what sound a lot like unlawful sexual assaults; the former is reportedly under criminal investigation on possible rape charges. Both also have a long and detailed trail of alleged sexual misconduct that might be too murky to prosecute, but would be more than enough to get a hardware-store assistant manager fired, or to form the basis for an expensive sexual-harassment lawsuit. Neither man has responded to the allegations in detail, but their rapid retreat from the public eye is understood to signify some degree of culpability and contrition.

With the cases of Moore and Franken, the right-wing Christian running for Senate in Alabama and the Jewish liberal who now represents Minnesota in that same body, we enter a realm of much greater epistemological uncertainty. To be extra super clear, I am absolutely not saying that there is no way to know what really happened and, oh my, our standards are so different today and it’s all an unsolvable mystery and therefore we should throw up our hands and do nothing. The allegations against both men appear specific and highly credible, although of differing severity. But it’s also true that both sets of allegations have been politically weaponized, and as my colleague Amanda Marcotte has argued, it’s highly plausible that Tweeden’s charges against Franken emerged this week as part of a coordinated political strategy.

Virtually no one, myself included, is capable of viewing this week’s Moore-Franken news dispassionately. Mitch McConnell and the “Republican establishment” would like to use the allegations that Moore serially preyed on teenage girls in his hometown to rid themselves of a candidate they see as poisonous to their brand, although they are (to exactly nobody’s surprise) being complete hypocrites about this. GOP heavyweights had made their peace with Moore, after all, when he was just a religious fanatic who argued that homosexuality should be criminalized and Muslims should be barred from holding public office.

Democrats, on the other hand, perceive an opportunity to steal a Senate seat in a deep red state in the Deep South, which in the party’s current state of ideological and organizational disarray would otherwise be unthinkable. (Even if Democratic nominee Doug Jones wins the Dec. 12 special election, I would encourage him to rent rather than buy in D.C.) Tweeden’s allegations against Al Franken, meanwhile — even if entirely factual — serve Republican ends by muddying the entire issue hopelessly, and empowering the smirking conservative narrative that every guy is a pig and liberal sanctimony is a pile of crap.

Furthermore, the Moore and Franken cases both require interpretation and some sense of historical context, things that generally speaking lie outside the American skill set. On one hand, it’s true that Roy Moore is a product of the extremist fringe of the evangelical South, a culture that appears grotesquely sexist and patriarchal from the “coastal elite” perspective of the 21st century. It wasn’t necessarily unusual for adult men to pursue (and marry) barely legal teenage girls in that context, but Moore stood out so much — even in Etowah County, Alabama, in the late 1970s — that he became known as the creepy, handsy, molesty guy at the mall.

By the same token, it’s reasonable to argue that Franken’s 2006 photo with Leeann Tweeden was a dreadfully misguided attempt at humor that looks a lot worse in the rear-view mirror. By Tweeden’s plausible-sounding account, however, Franken was obsessed with her and pursued far past the point where she made clear she wasn’t interested, including an alleged forcible kiss that sounds dangerously close to assault. Does it matter that Franken was not a public official or a candidate at the time, and that to this point there have been no other credible allegations of sexual harassment against him? I think it does, but I wouldn't presume to say how much.

Amanda Marcotte has already made the case on Salon that for both political and moral reasons, the Democratic Party should cut Franken loose. If he resigns, the Republicans lose their moral-equivalency weapon (she argues), and attention reverts to the far more serious charges against Moore, not to mention the numerous charges of sexual harassment, sexual abuse and sexual assault against Donald Trump, who has good reason to view this entire issue as radioactive.

That’s a valid political argument that may suffer from the same problem as that Clinton-campaign celebration mentioned by Masha Gessen: an old-fashioned faith in the shared perception of reality. Donald Trump’s supporters, like Roy Moore’s supporters, either believe the accusations against their hero are lies spread by the “fake news” liberal media or believe that they are true but do not matter, because they reflect deeper truths about the nature of men and women and sexuality. In some sense they may believe both things at once, because they have been conditioned to the idea that nothing is true and nothing matters, and that “reality” is a subjective, emotional phenomenon we create for ourselves. There is no political solution for that.