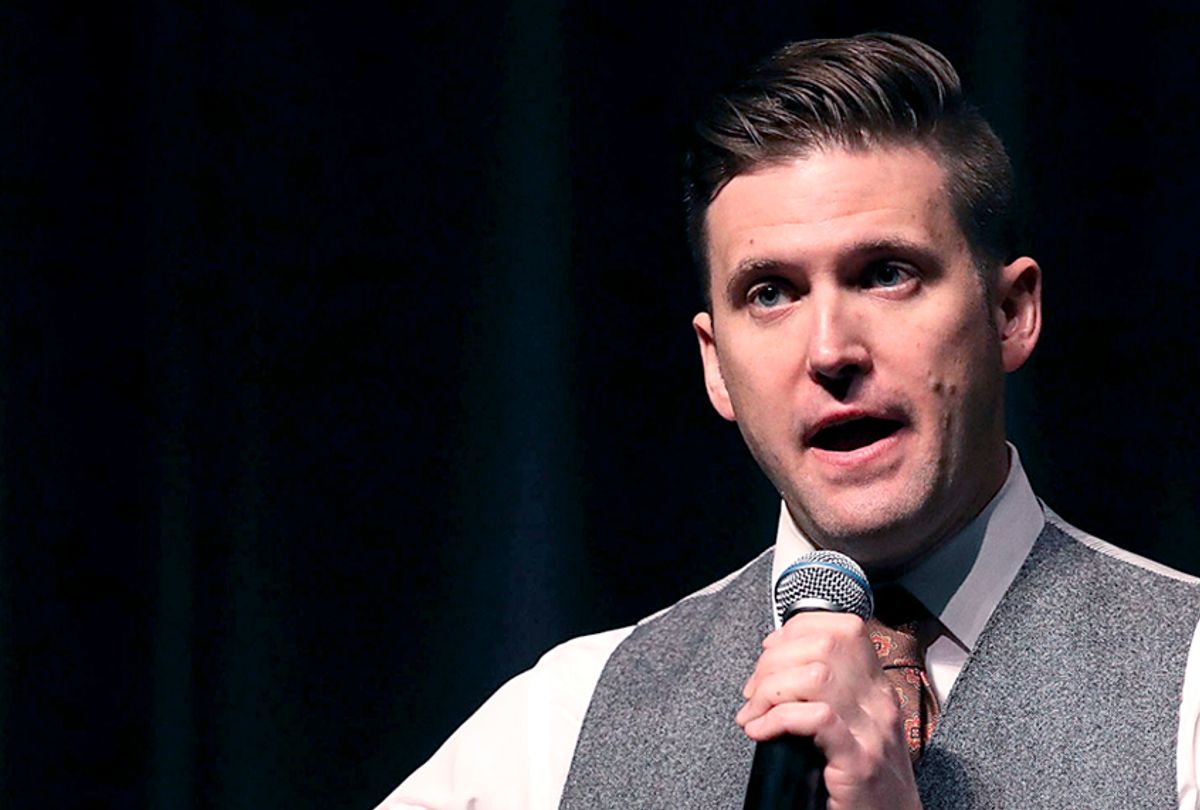 A weekend conference at a Maryland farm organized by white supremacist Richard Spencer was shut down after the owners realized Spencer was on their property and behind the event.

Spencer's so-called think tank, the National Policy Institute (NPI), hosted the event on Sunday at a venue called Rocklands Farm. The all-day conference was supposed to run from 11 a.m. to 8 p.m., according to The Washington Post. Spencer said that a third-party logistics company, at the behest of the NPI, had told the farm's management that it was merely a "corporate" gathering, not one that would be teeming with "alt-right" types and white supremacists.

Around 4 p.m. on Sunday, when a worker at the event realized Spencer was present, management kicked everyone out and issued full refunds. Roughly 100 people attended.

"We didn’t lie, we didn’t deceive, and we certainly did not break any rules while we were there," Spencer told the Post. "We had sharp words and were obviously disappointed, but there was no confrontation of any kind."

"I’m not mad, but if I were a business owner, I would not do that," Spencer added. "If communists came to my establishment, but they were civilized, I couldn’t imagine kicking them out. So I’m certainly disappointed, but we are not going to retaliate. It’s just life in 2017 for us."

In a statement on their website, Rocklands Farm said, "We proudly do business according to family values, including welcoming people of all backgrounds, races, ethnicities, cultures, and religions."

"Throughout our history of hosting private events, we have never had to ask a group to leave. However, yesterday, November 19, we discovered that a private event held here was, in reality, a gathering of an organization that is strongly in opposition to our values. We immediately and politely asked the group to leave," the statement continued.

"We are grateful that the group agreed to peacefully leave right away. Rocklands Farm absolutely does not support or have any affiliation with the National Policy Institute or similar groups."

Spencer and the NPI had originally been rejected from booking space at the Ronald Reagan Building and International Trade Center, a D.C.–based, government-owned conference center. A property manager for that center said they were not allowed to book due to safety concerns, the Post reported.

Spencer, of course, was one of the leaders of the deadly August rally in Charlottesville attended by neo-Nazis and white supremacists. The rally left a peaceful counter-protester, Heather Heyer, dead after she was struck by a car driven by a neo-Nazi who plowed into opposition demonstrators.

The "alt-right" leader also led a torch-lit demonstration at the statue of Confederate Gen. Robert E. Lee in Charlottesville in October.