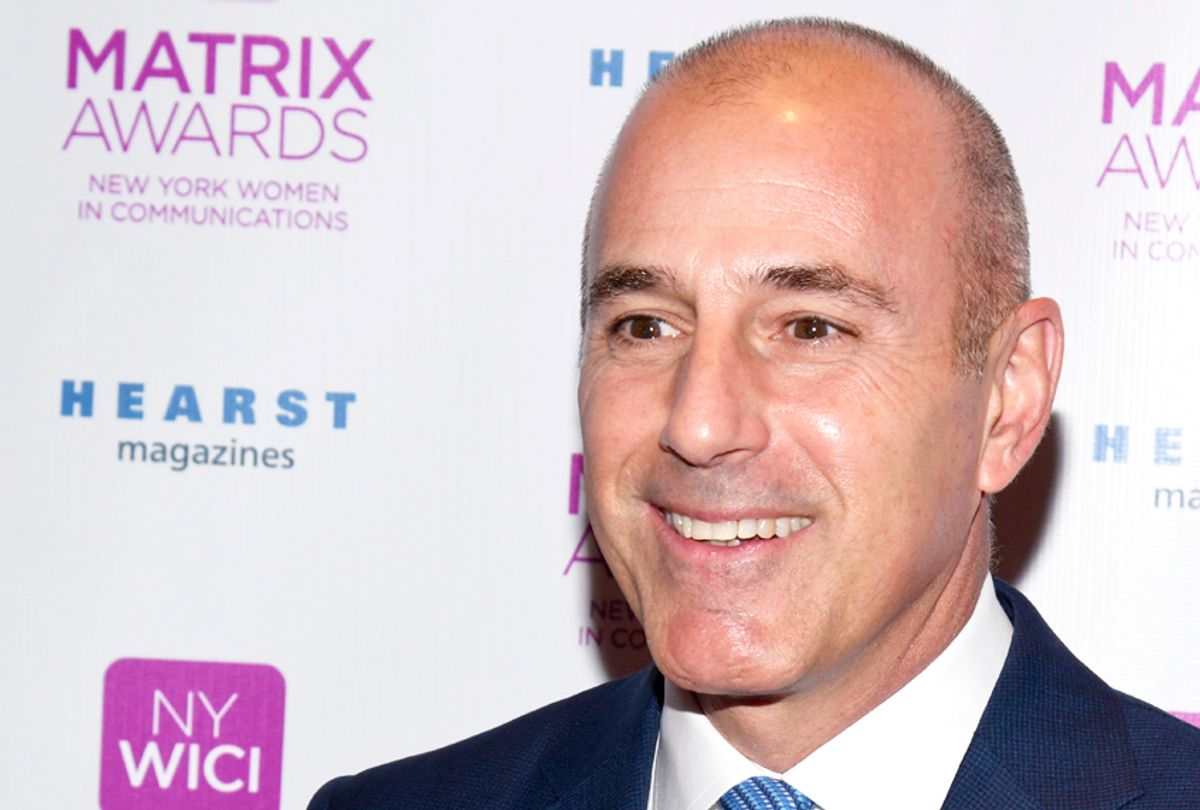 Years before former NBC anchor Matt Lauer was fired for alleged sexual misconduct, he pantomimed some of the offenses he's now accused of in a "Today" show comedy sketch.

In 2014's "Today: The Musical" — a musical-comedy production on the show — Lauer takes off his pants for a fresh press and waits in his boxers. Four women colleagues walk in. He turns to them. "Drink it in, ladies," he says. "Get it while it lasts." Host Natalie Morales responds, "Again, Matt, really?"

Cringe as you watch this 'Today' show skit in which Matt Lauer takes off his pants, exposes himself to four female colleagues and says "Drink it in ladies! Get it while it lasts." pic.twitter.com/FKP213H59n

Aside from the fact that the scene just isn't funny, it's now disturbing given some of the accusations made against Lauer.

Further, Morales saying "Again, Matt" seems doubly problematic given that reports say many "Today" and NBC staffers were aware of Lauer's behavior. It's easy to suspect that some of the on or off-camera crew working on that very sketch had been victimized by Lauer or least known those who had been.

The Daily Show resurfaced another comedy sketch from 2012 that showed Lauer and others seemingly making light of sexual harassment.

Throwback to 2012 when Matt Lauer was the “real victim” of sexual harassment on the Today show pic.twitter.com/mYdnhEV2wv

Lauer was fired Tuesday night after NBC received a complaint of "inappropriate sexual behavior in the workplace," NBC News Chairman Andrew Lack wrote in a memo to NBC employees.

Thursday, Lauer released a public apology, which was read live on "Today". "Some of what is being said about me is untrue or mischaracterized," it read, "but there is enough truth in these stories to make me feel embarrassed and ashamed. I regret that my shame is now shared by the people I cherish dearly."

As of Friday, the Los Angeles Times reported that Lauer has scrubbed his social media accounts and appears to have deactivated them as well.

With the ouster of Lauer, NBC News management has come under intense scrutiny. Friday, Lack announced an internal review of the situation in a memo to staff, as a way for NBC to "build a culture of greater transparency, openness and respect for each other," Lack wrote. "At the conclusion of the review we will share what we’ve learned, no matter how painful, and act on it."