Not long after his "Pocahontas" slur, Trump will try to undo Native tribes' preservation work with a single stroke 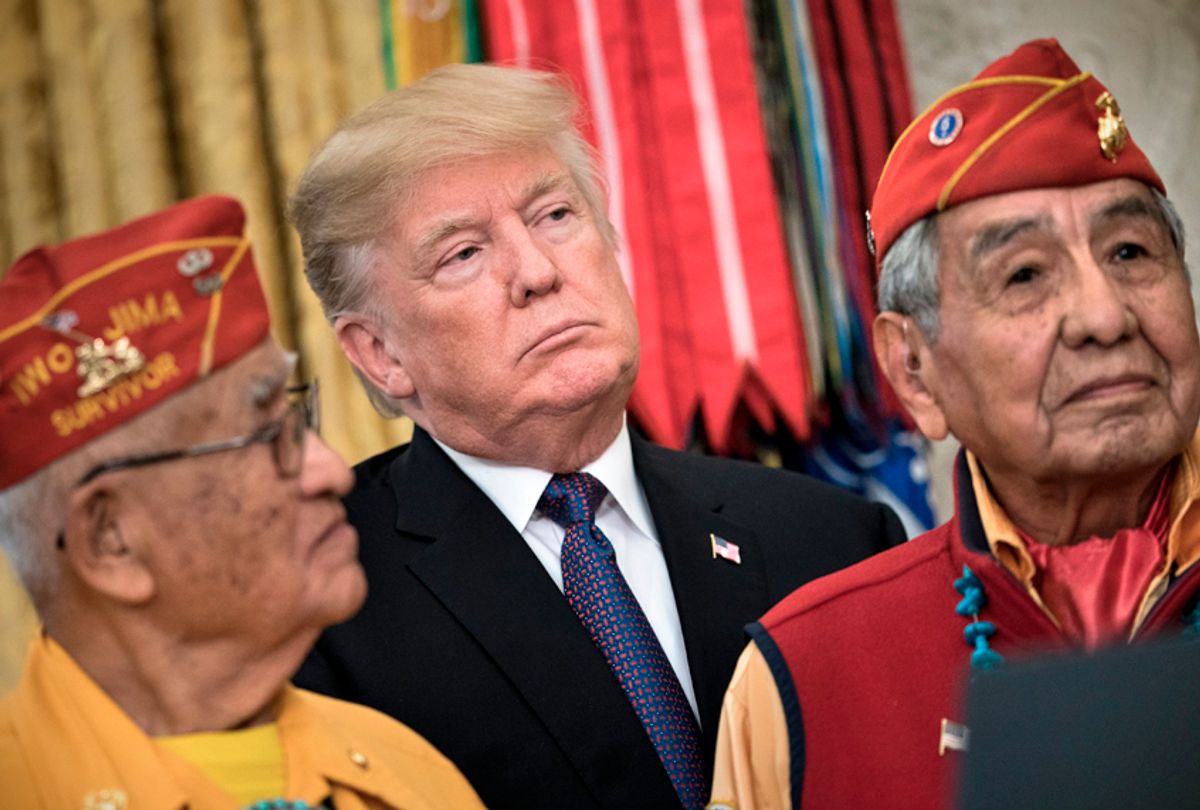 November was Native American Heritage Month, which Donald Trump naturally used as an excuse to crack a "Pocahontas" joke while addressing a group of Navajo World War II heroes he was supposed to honor. (Trump presumably can't be bothered, but it is worth learning more about their truly fascinating story.) But now that month is over, and Trump and his administration are taking the opportunity to escalate their disrespectful attacks on Native American heritage and history.

On Monday, the president is expected to unveil a plan to drastically reduce the size of two national monuments in Utah, Bears Ears and Grand Staircase-Escalante, by 85 percent and nearly 50 percent, respectively, according to documents leaked from the Interior Department. The Republican congressional delegation from Utah has pushed for this for a long time, fueled by their ideological ties to far-right movements that reject federal land ownership rights. Oil and gas companies, eager to exploit incredibly low market rates to secure cheap leasing rights, have exerted pressure as well. And Trump's notorious resentment of Democrats, particularly former President Barack Obama, means he's eager to reduce the size of Bears Ears (designated by Obama) and Grand Staircase-Escalante (designated by Bill Clinton), essentially out of spite.

But this move is a vicious slap in the face to the Navajo, Ute Mountain Ute, Uintah Ouray Ute, Hopi and Zuni tribes that have spent years, particularly the Navajo, working to get Bears Ears designated in the first place. The idea of Bears Ears was initiated by Navajo leaders and activists, who went through a hellish political process — which got extremely ugly at one point, when San Juan County Commissioner Phil Lyman led an armed group of men into sensitive lands to stand up for the white man's "right" to use ATVs to tear up lands dear to local tribes — to clear the path for Obama to sign the national monument designation in December 2016.

"We’re obviously very disappointed that this administration feels they can completely disregard all the work that the five Native American tribes have done to protect their heritage at Bears Ears, and at their lack of tribal consultation and just basic respect and communication around this drastic action," Gavin Noyes, executive director of Utah Diné Bikéyah, told Salon. The group is a Native-led organization created to defend Bears Ears and ancestral lands for Native people generally.

“The land is where our history is written: On the canyon walls, with all the vegetation, and even more so what our ancestors have come through to bring us to today through our learning, our culture, our history," said Regina Lopez-Whiteskunk, who has served on the council for the Ute Mountain Ute and currently works with the Western Leaders Network, during a recent press call.

Because so much Native American history is orally transmitted, Lopez-Whiteskunk explained, the land is an important place of historical memory. "Ownership was never really a part of our cultural values, but the land does represent our identity, through the language, through ceremony, prayers, and the resources that the lands provide for us," she argued. "It also is the final resting place of our ancestors."

"The tribes have inhabited these areas for more than 10,000 years," Noyes explained. "There are deep cultural and spiritual ties to not just the objects that are protected under the national monument, but to everything that informs who they are as people.”

Between August and November, the Utah Chapter Houses bordering Bears Ears, which form the Navajo Nation system of government in the area, had town-hall-style meetings and took votes on whether the local Navajo people wanted to preserve Bears Ears as it is. Ninety-eight percent of those present voted in favor. These houses represent half of the population of San Juan County.

If Trump declares that 85 percent of Bears Ears will be removed from national monument designation, as he is expected to, Noyes says Utah Diné Bikéyah and other groups — representing Native interests, environmentalists and outdoor recreation interests — will likely sue the government, arguing that Trump lacks the authority to take away a designation that's already been given. Rep. Ruben Gallego, D-Ariz., has also introduced the Bears Ears National Monument Expansion Act, which would give congressional protection to the area while also expanding its size. That's unlikely to pass a Republican Congress, of course, but Gallego's bill will focus attention on the importance this area has not only as a tourist destination — though it is already a popular one — but also as a site of cultural and historical significance to Native Americans living in the area.

“At its core, this is an issue of tribal sovereignty, tribal self-determination," Natalie Landreth of the Native American Rights Fund said in a statement. The Bears Ears National Monument obviously cannot make up for all the wrongs done to Native Americans throughout American history, but it was a crucial gesture towards preserving a history that goes back thousands of years and the legacy of those tribes that still live there today. Trump's effort to wipe out all the hard work done by Native Americans to save this land is another in a long list of blatantly racist acts undertaken by a president who won the election on a tidal wave of white resentment.