When it comes to important things, the media is "wasting their time" every weekday with press briefings on TV 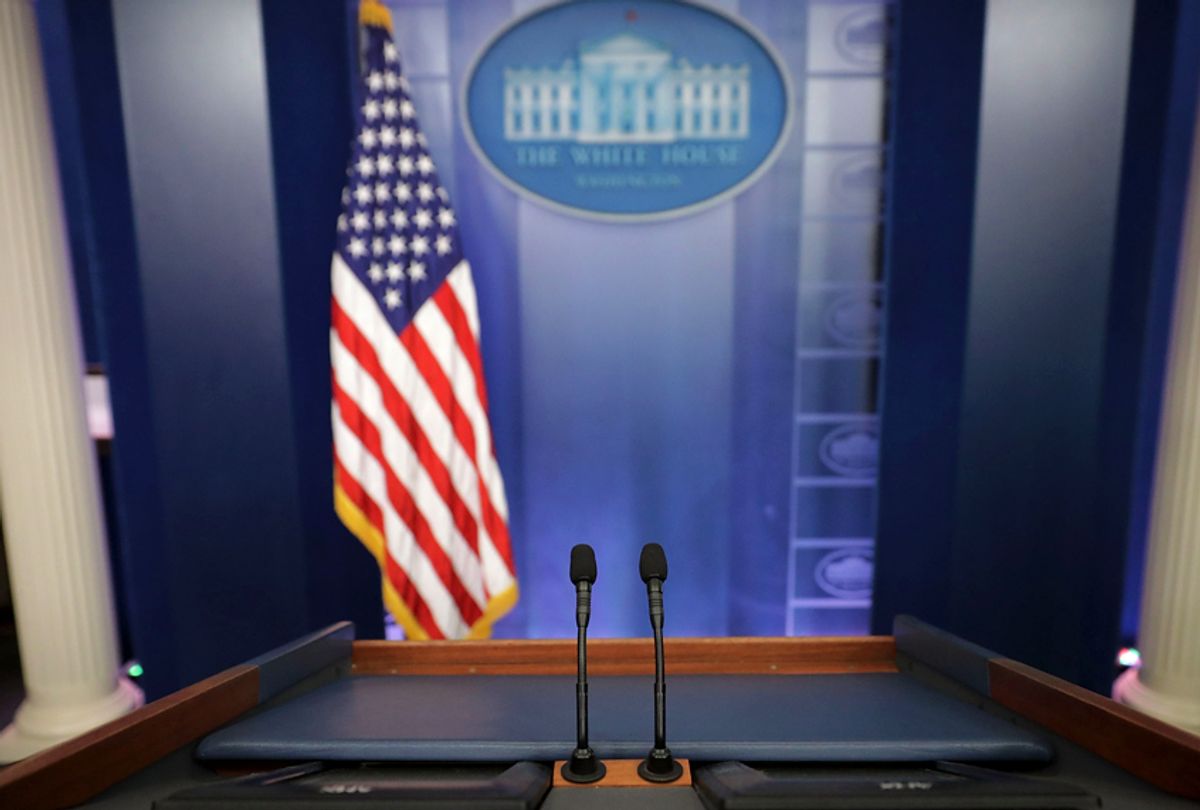 The daily White House press briefing has become, in 2017, a unique charade that typically has little to offer beyond baffling soundbites. This vapid, shallow parade is, unfortunately, perfect for cable news in 2017 — and all the more reason to move it off the airwaves.

"I see a lot of bright, talented well-sourced people in that room absolutely wasting their time. They should be putting their talents to use in better ways," Chris Daly, a journalism professor at Boston University, told Salon. "I think they've taken an institution of marginal value, and made it truly worthless."

"I think it is a bankrupt, empty exercise at this point. Sanders does not make news, she does not even announce news, Daly explained. "She's just there to bat away questions and it's just a ridiculous waste of time" that is, in turn, "degrading" to the press corps.

One journalist who has been part of the press corps for years has a different way of looking at it.

"Sarah Sanders puts the brief in briefing," Chris Johnson, chief political and White House reporter for the Washington Blade, told Salon. Johnson said that the Trump administration has made press briefings more difficult, seeing them as a "necessary evil"  compared to the previous administration, which was "much more willing to work with the press."

Each weekday, Sanders controls the room during the briefings, so she decides which questions to answer, which reporters to call on and how she can avoid their questions. This often leaves journalists' hands tied.

Press corps reporters "have a sense of decorum, they have standards by their own news organizations. They can't really shout at her, they can't really do the things that I think a lot of her behavior merits — so they're really stuck," Daly explained.

"I think what's important about press freedom and accountability is that the president should have to have press conferences. I don't care what Sarah Huckabee Sanders thinks, I want to know what Donald Trump thinks," Daly said. "And he has really, I think, set a new record for not meeting with the press in unscripted, wide open, free-ranging press conferences."

He added, "That's the main thing that's lacking in this administration."

"Even if the White House press secretary doesn't have a whole lot to say, her minimal response, or lack of response, is very revealing about the administration's position and how it's handling the challenges facing the country and the administration itself," Johnson told Salon in a phone interview.

But it wasn't always this way.

Daly said that, when he covered the Massachusetts State House for the Associated Press, things were a lot different.

"Back then, the press corps would come to these press conferences because you had the newsmaker there himself," Daly explained, referencing the then-Democratic Gov. Michael Dukakis. He added that the governor "would usually have something to say, you know, announce something, and then take questions on all topics.

"Those were very productive, but if the governor's press secretary said, 'I'm going to have a press briefing'" the reaction would have been "what's the point?"

In theory, holding daily press briefings for a sitting administration is well-intended and proves purposeful if it can pull back the curtain and increase executive branch transparency. But the Trump administration has been openly opposed to any whiff of adversarial behavior from the press — far more overtly than any other presidential administration to date.

Johnson told Salon he attends all of the press briefings, contributes to pool reports and also did so under former President Barack Obama's administration. He described Sanders as "very much laconic compared to any of the three Obama press secretaries, who were quite loquacious."

"They [the Obama administration] saw that as an opportunity for them to get their message out, to engage with the public, and saw these press briefings as a net gain for them," Johnson said.

Johnson previously expressed frustration that he has essentially been ignored in many of the briefings, which he said could be because he represents an LGBT media organization, which coincided with the Trump administration's increasingly regressive actions LGBT issues. He's only been called on once in on-camera briefings after Sanders took over, days after he wrote an article criticizing her for failing to call on him.

Nonetheless, Johnson told Salon that being ignored gives him even more of a reason to attend briefings and represent a marginalized community that deserves a voice. He explained that just because the briefings' content might be worthless, it doesn't mean there's nothing the public can draw from them.

"I think we can get a lot of out if they're vapid because it's reflective of who the administration is, and its approach to the public," Johnson explained.

He added, "Ideally we would have a press secretary who is willing to work with the press, whatever the ideology of the outlet — for outlets big and small" to reach as many news consumers as possible. If there weren't press briefings under Trump at all, Johnson said it "would be a very bad thing."

It used to be that the press briefings attracted minimal attention — and the only insane things the media had to worry about was the president showing up at the podium dressed in a tan suit.