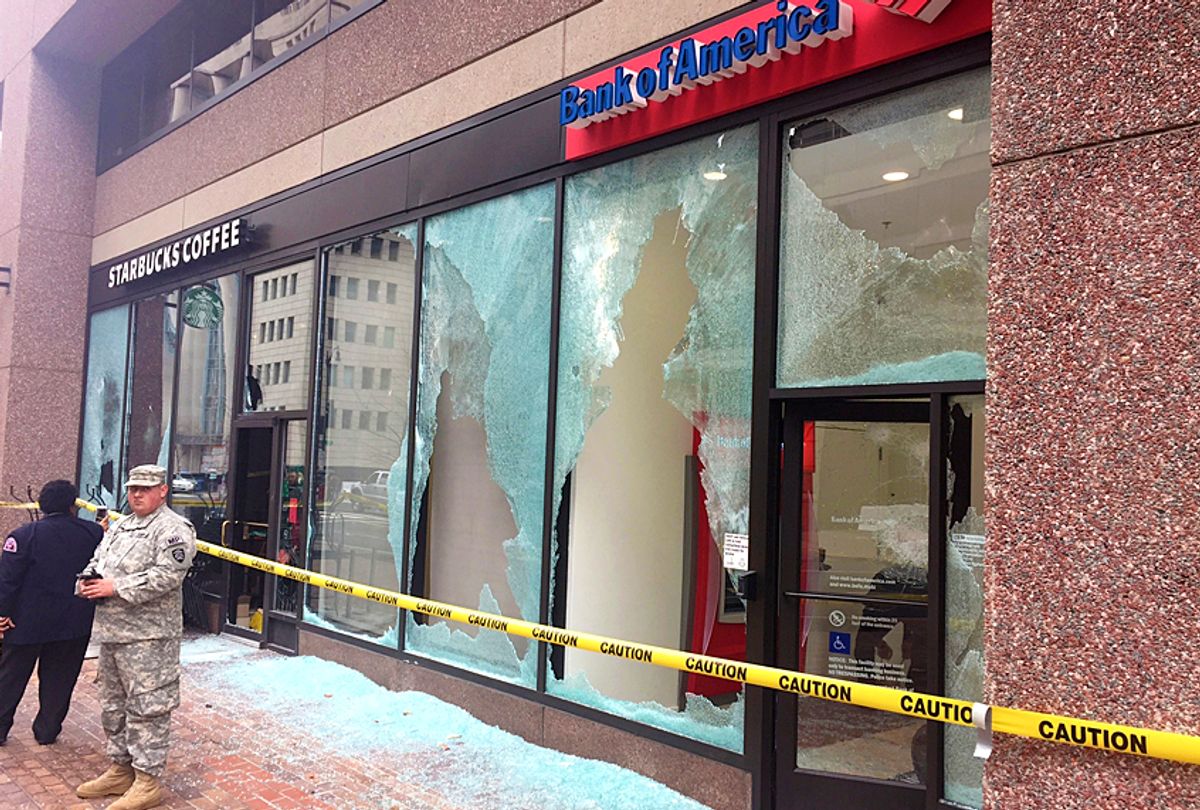 Tape closes off broken windows at businesses in Northwest Washington, Jan. 20, 2017, after a protestor of Donald Trump's inauguration (AP/Michael Biesecker)
--

While most of America has been preoccupied with year-end holiday festivities and the Alabama U.S. Senate race, federal prosecutors in Washington have been hard at work trying to convict six people who were present during a demonstration against the inauguration of President Donald Trump.

The trial, which is taking place in the District of Columbia’s Superior Court, has received comparatively little attention from the national press. It deserves to, since prosecutors are trying to redefine the rules governing public demonstrations. Federal authorities have admitted they have no actual evidence that the defendants on trial committed acts of vandalism, but want to convict them of serious crimes anyway.

“I’ll be very clear. We don’t believe any of the defendants personally engaged in property destruction,” U.S. Attorney Jennifer Kerkhoff admitted in her opening statement in mid-November.

Instead of trying to identify and indict the small number of anti-Trump protesters who damaged trash cans or broke windows last Jan. 20, Washington police decided to make mass arrests, rounding up anyone who happened to be near a demonstration that began in the Logan Circle neighborhood, regardless of what they were actually doing.

More than 200 people were arrested that day. Federal prosecutors, who ultimately work under the authority of Attorney General Jeff Sessions, have decided to throw the book at the arrestees, vowing to put them all on trial in a succession of small proceedings that will likely last until the end of next year. Among the accused are several nurses whom prosecutors have accused of aiding rioters because they were carrying first-aid materials.

Justice Department attorneys set off alarm bells among civil liberties advocates in August when the agency filed a search warrant against the company that hosted a website for DisruptJ20, the main group that organized the protest. Prosecutors apparently hoped to obtain network and browser records for anyone who had ever visited the DisruptJ20 site. The DOJ was forced to back down after DreamHost, J20’s internet provider, challenged the request in court.

“No plausible explanation exists for a search warrant of this breadth, other than to cast a digital dragnet as broadly as possible,” Mark Rumold, a senior staff attorney at the Electronic Frontier Foundation, wrote at the time.

Beyond their novel interpretation of rioting and vandalism statutes, prosecutors have assigned police and prosecutorial resources to the case far in excess of the estimated $100,000 in property damage that occurred on Inauguration Day. In court, D.C. police detective Greggory Pemberton admitted that he had been working full-time on reviewing publicly recorded footage from the event since January.

Among the video that Pemberton and his colleagues have been sifting through is footage from Alexei Wood, a photographer who had only attended the demonstration to live-stream it as a journalist. Wood’s inclusion among the J20 defendants is significant because while he periodically cheered acts of vandalism he witnessed, he clearly did not take part in any of them. Instead, government attorneys appear to be trying to prosecute him because of his expressed opinions about the protest.

Under defense questioning last Monday, police commander Keith DeVille admitted that he had directed subordinates to release people who had been rounded up who carried press badges issued by their employers.

“We knew we had some media folks in there — it was easily discernible that they were not part of the riotous group,” DeVille said, while also admitting that there is no central authority for media credentials.

Wood, who lives in San Antonio, Texas, was not the only member of the media who was rounded up by police. Among the other people arrested was Lauren Southern, a white nationalist Canadian vlogger and Trump supporter who was also trying to cover the demonstration. Unlike Wood, she was released after her arrest. Some of her footage from that day has been used in court against defendants.

Several other journalists were charged alongside Wood. All but one, Aaron Cantú, have had their charges dropped.

Lynn Leibovitz, the judge who is presiding over the first J20 trial, appeared to be sympathetic to the prosecution’s argument as the trial began.

“It actually is not the same as [NBC News reporter] Andrea Mitchell, as I think about it, because a newscaster would be neutrally pitching it,” Leibovitz stated, as reported by Washingtonian magazine. “And here, what’s happening is, it’s a real time advertisement and recruitment measure, so that it’s a cheering of the event publicly to others. It’s a broadcasting to others as events are happening. It’s a celebration of particular events which are events that are – that constitute the violent and tumultuous conduct that makes up a riot, if true.”

Wood has not publicly testified yet but has maintained his innocence.

“If people want to critique my professionalism, I get it, but is it a criminal offense? Fuck no,” he told Washingtonian magazine outside the courtroom on the first day of the trial.

Prosecutors have also utilized footage from other far-right figures and organizations, including Project Veritas, the activist group founded by James O’Keefe which was recently revealed to have attempted to dupe the Washington Post with a fabricated statutory rape accusation against Alabama Senate candidate Roy Moore.

Defense attorneys tried to exclude the Project Veritas video by pointing to indications that it had been altered. Their objections were overruled by Leibovitz. At another point in the trial, she allowed prosecutors to publicly present video of Wood’s arrest which included him reciting his Social Security number. The judge has also allowed protest footage captured by Oath Keepers, a right-wing paramilitary group that tells its members to carry weapons at all times and prepare themselves for “full-blown Civil War.”

“The federal government is inundating the jury with video footage of the same broken windows in order to obscure the fact they have failed to present a compelling case to the jury,” said Kris Hermes, a representative of Defend J20 Resistance. “It’s indefensible for the Trump administration to spend millions of dollars to try nearly 200 people on several felonies for property damage.”