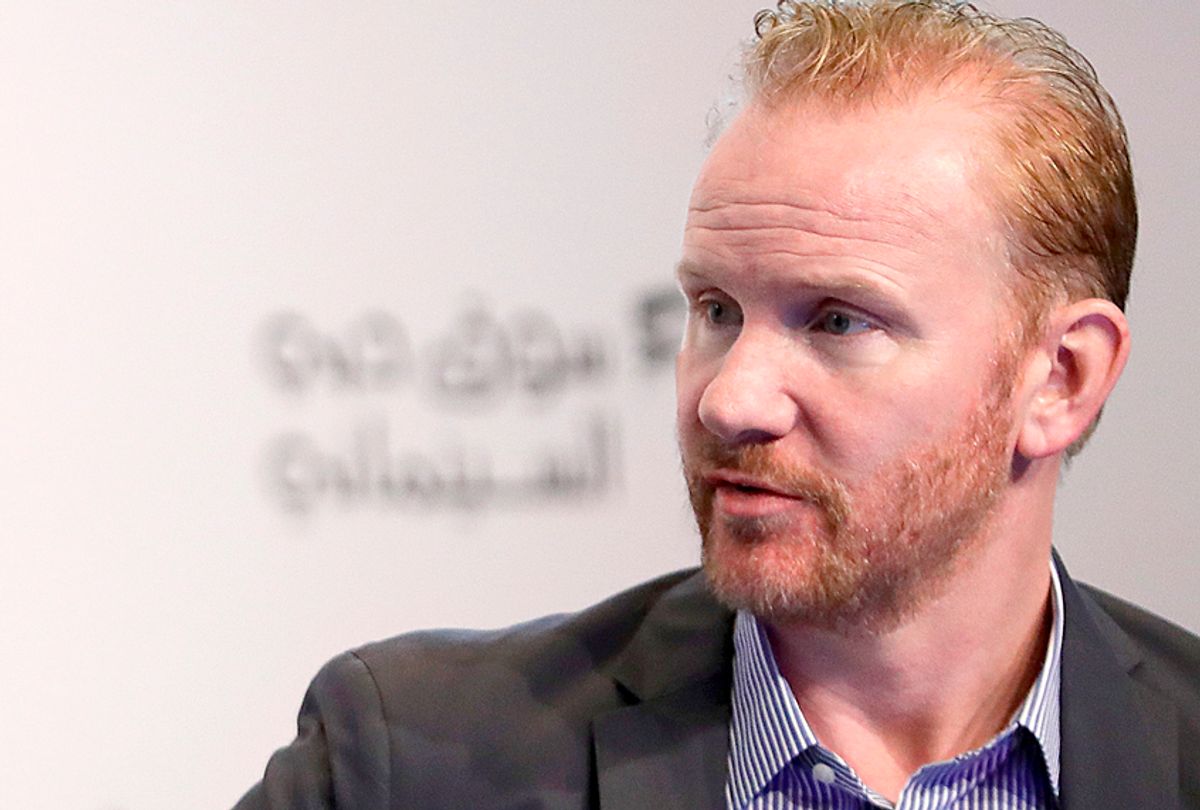 Along with the truly nauseating details of so many recent high profile revelations of sexual harassment and abuse (I'm still reeling from Matt Lauer's Bond villain door lock) one of the biggest surprises of this watershed moment is discovering how truly awful guys like Morgan Spurlock are at apologizing.

Perhaps seeking a measure of control over a story that by now sounds strikingly familiar, the documentary filmmaker revealed on Twitter Wednesday evening that "I am part of the problem." What followed was a lengthy mea culpa — and mixed reviews from his social media audience. Some saw Spurlock as "brave to come forward honestly" and praised his "unbelievable courage;" others pondered that "self-victimization is an abuse tactic" and noted the "performative" aspect of Spurlock's confession and its poetic repetitiveness. I'm still trying to get my head around how someone who is a paid professional storyteller could be so outrageously bad at this.

Spurlock now joins a long line of men that includes Louis C.K. and Kevin Spacey, men who you'd think would know how to craft an apology that at least carries a whiff of comprehension about the nature of thing being apologized for. Couldn't they, I don't know, ask another human to give their statements a once over? Or are these guys still so driven by their own hubris, so insulated from real criticism, that they can't entertain the possibility that their crap statements about their crap behavior are not applause-worthy? Let's take a look at some examples of how what ought to have been Spurlock's straightforward acknowledgment of contrition became instead a total garbage fire.

As I sit around watching hero after hero, man after man,

Right out of the gate, in your very first words, dude, you lost me. Visualize having the empathy to consider that maybe the men you consider "heroes" have for a very long time been part of whisper network of known predators. You may be late to party, but immediately identifying actual sexual offenders as "heroes" is an inauspicious start.

fall at the realization of their past indiscretions,

They didn't fall at the "realization" of "indiscretions." They were "exposed" as "serial abusers," who are in several cases accused of "criminal sexual assault." Fixed that for you.

I don’t sit by and wonder “who will be next?” I wonder, “when will they come for me?”

Because it's important here to start portraying the men and women who've come forward about their experiences of abuse and harassment as a pitchfork mob.

When I was in college, a girl who I hooked up with on a one night stand accused me of rape. Not outright. There were no charges or investigations, but she wrote about the instance in a short story writing class and called me by name.

What follows next is an odd story of the he said-she said aftermath of what Spurlock describes as a drunken encounter. While it's not possible to discern whether Spurlock's is an accurate version of events, it does seem safe to question why he's bringing it up. Could his motives for insisting that:

include the classic, undermining suggestion that a woman's claim of assault is really just a big misunderstanding, just a hookup that went wrong? He continues by moving into his work years.

I would call my female assistant “hot pants” or “sex pants” when I was yelling to her from the other side of the office. Something I thought was funny at the time, but then realized I had completely demeaned and belittled her to a place of non-existence. So, when she decided to quit, she came to me and said if I didn’t pay her a settlement, she would tell everyone.

Translation: I thought I was being funny, she then basically blackmailed me.

And then there’s the infidelity. I have been unfaithful to every wife and girlfriend I have ever had. Over the years, I would look each of them in the eye and proclaim my love and then have sex with other people behind their backs.

Yeah, no one cares. No. One. Cares. In much the same that Kevin Spacey unsuccessfully tried to deflect an accusation of predatory behavior to underage males by coming out as gay, admitting you cheat on your partners has exactly nothing to do with harassment. Consensual adult private behavior — even behavior that is selfish and dishonest — is nobody's business but yours and your family's. Trying to smoosh your consenting and allegedly non-consenting actions together into one litany of bad choices is just manipulative. And more troublingly, it suggests you don't grasp the distinction.

But why? What caused me to act this way?

Here Spurlock launches into an examination of possible motives for his actions, including sexual abuse, his father's abandonment, alcohol and depression. No sentient person would wish those experiences on any other human being, and Spurlock deserves as much healing and compassion as any abuse survivor. Yet the amount of time he devotes to his own suffering and to assigning outside explanations for his own behavior are pretty telling — and very familiar to anyone who's ever watched someone go from apologizing to rationalizing at whiplash speed.

I am part of the problem. We all are.

But I am also part of the solution.

By recognizing and openly admitting what I’ve done to further this terrible situation, I hope to empower the change within myself. We should all find the courage to admit we’re at fault.

How very self congratulatory of you!

It's really not so hard to say, "I did bad things and I am very sorry." It's not hard to come up with a concrete action plan beyond "listening." Who are you going to listen to, specifically? Name a single individual or organization. What are you going to do, precisely, to change the culture in your work environment? You've obviously had time to think about this over the past several weeks, but did you think in a way that wasn't about protecting your own career and brand? How can you make this a story that's not — just like nearly every single other man who's been in this spot lately — about your newfound journey of discovery, but is instead about actually doing something constructive for women?

Spurlock has been relatively quiet on Twitter since his Wednesday announcement. But shortly after, he retweeted three replies. Two of them were from women. Both, apparently approvingly, used the word "courage."