The FCC sold us out to Big Telecom

There isn't a good excuse for ending net neutrality, other than that we live in an oligarchy now 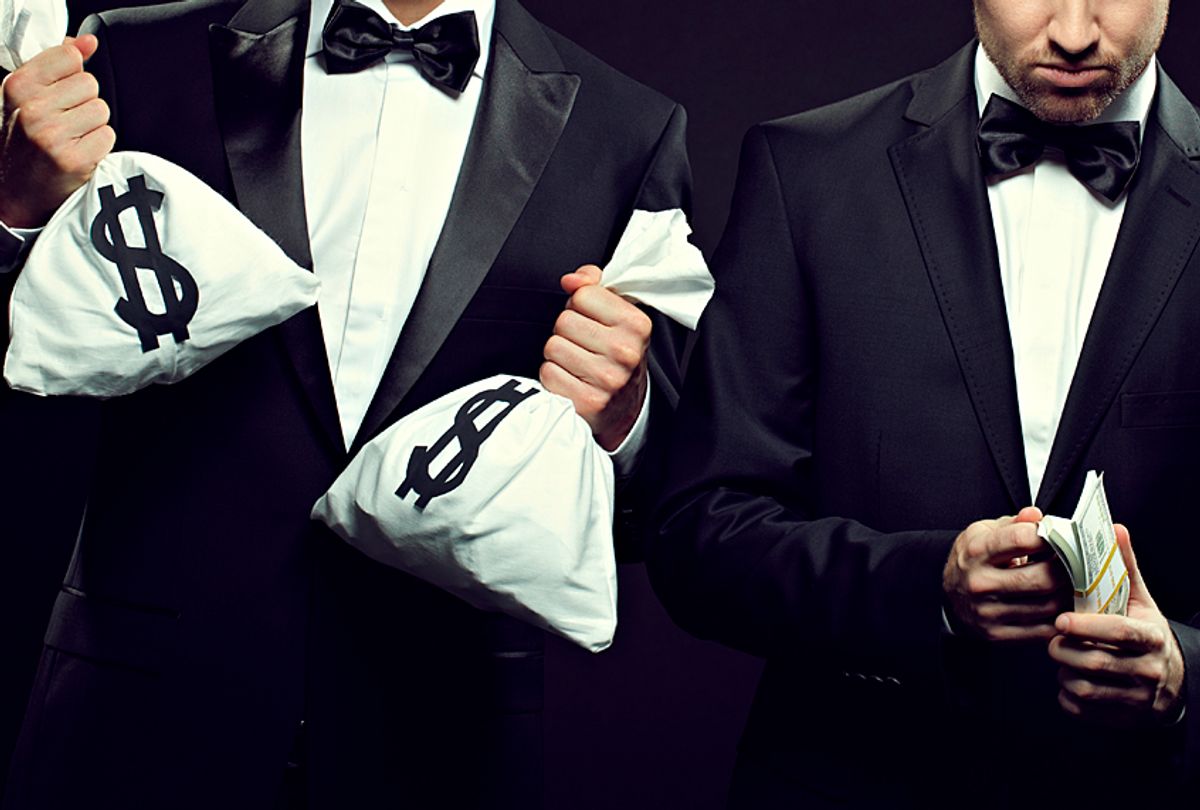 The Federal Communications Commission handed the internet to Big Telecom on Thursday. They sold our public utility down the river. Nobody will benefit but the rich.

The online world was built on the principle of net neutrality. Neutrality meant that Internet Service Providers (ISPs) had to treat all data the same: a New York Times article would move through the digital pipes at the same speed as a celebrity sex video. Much like your parents, ISPs were required by federal law not to pick favorites. Under net neutrality, AT&T couldn't charge you more for Facebook than Google, or deliberately slow down your service. If you wanted to tweet "I love u, Dylan McDermott" to Dermot Mulroney at 3 a.m., by God, that was your right.

Well, goodbye to all that.

All Trump appointees have one thing in common: they hate the agencies they lead. Scott Pruitt sued the EPA 14 times. Betsy DeVos doesn't believe in public education. And the FCC is no exception. The Commission is in the hands of corporate shysters who have spent their lives shilling for private interests. The current chair, Ajit Pai -- one of the most loathed men in the country -- was a longtime attorney for Verizon.

The two Democratic FCC commissioners, Mignon Clyburn and Jessica Rosenworcel, voted to keep neutrality. Both delivered hide-skinning rebukes. Clyburn wrote: "I dissent. I dissent from this fiercely-spun, legally-lightweight, consumer-harming, corporate-enabling Destroying Internet Freedom Order ... the public can plainly see, that a soon-to-be-toothless FCC, is handing the keys to the Internet — the Internet, one of the most remarkable, empowering, enabling inventions of our lifetime — over to a handful of multi-billion dollar corporations."

The representatives from telecom -- Pai, Michael O'Rielly and Brendan Carr -- voted the way their owners wanted. We should call the FCC's sellout of net neutrality what it is: Pai's Auction.

If Pai's Auction is unopposed, broadband monopolists will take the Net from the poor, and slow it for everybody except those who pay top dollar. Some time next year, your ISP will begin peddling "Slow," "Normal," and "Fast" packages. If you want Netflix, you'll need to pay more for it. Want Hulu? Ante up. Need Twitter? Make with the green. Facebook? That'll be 20 dollars extra this week, ma'am. What's that? You crave Reddit? Well then, big spender, how 'bout you upvote some legal tender? Unless we fight Pai's Auction, that's our grim meathook future. What we saw on Thursday was a commercial exchange between the Trump administration and the one percent.

There is one way to stop it: public awareness. Very soon now, the FCC will be sued, and Congress will eventually be dragged into action. That will be our chance to set right what the telecoms so desperately want to keep wrong.

Why the auction happened

Pai whined to the media that he was being hassled for his "position." This makes sense. Muggers are big believers in their victims being obedient. But this slimy Harvard hustler has a point. Pai's Auction isn't just ludicrously bad planning, it's unabashed, unapologetic greed. Pai's Auction is the economic history of America in miniature.

Here's how that usually works: The American people fund a public good, like highways or medical research. While the public is doing the hard work, private interests figure out ways to profit. They bribe their way into power so they can seize this good. They hire sleazy lawyers to do their dirty work. Then, after the rich guys have taken over, they sell that same good back to the public. Socialized expense, privatized profits. Here's a simpler way to say it: The public makes, and the wealthy take.

The public built the internet. We did. All of us. And the ISPs got rich. By the early oughts, the telecom giants were making money hand over fist ... but they wanted more. You know how it goes: new car, caviar, four-star daydream.

So, during the Bush years, the ISPs made their move. They began to strategically limit certain kinds of internet use. In 2002, RoadRunner began to selectively block user ports. In 2005, Madison River Communications was caught blocking VOIP traffic. The FCC opposed them. The case was dropped. In 2011, Verizon sued the government to fight net neutrality. In 2012, AT&T blocked FaceTime. Finally, in February 2015, Obama's FCC decided to classify broadband as "a common carrier" under Title II of the federal Communications Act of 1934 and Section 706 of the 1996 Telecom Act. Under Title II, the government treats the internet like a public utility, more or less. That is the ruling Pai and his cronies just voted to undo.

You may ask: How can I can be so sure that Big Telecom will block and throttle the internet? Answer: Because they have already tried. Many, many times.

History shows us why net neutrality is important. My objection to Big Telecom isn't just philosophical; it's chronological.

There is no argument for this

There's a lot of naiveté in America. For instance, some people still believe Trump's GOP has the genetic capacity for shame. Nonsense. Pai and his friends have the sentimentality of Victorian wharf pimps. And of all the GOP's shameless cons, Pai's Auction is the most blatant. This is as obvious as politics gets, folks.

The sell-out of net neutrality is massively unpopular. As Motherboard's Jason Koebler wrote, a new poll released by the University of Maryland "found that 83 percent of Americans — and 75 percent of Republicans — favor the current system (the group that conducted the poll clearly explained the current regulations as well as the proposed ones)." Eighteen attorneys general sent a petition to the FCC demanding they pause on the vote. Reporter Mallory Shelbourne noted, "The letter comes after a separate letter from the office of New York Attorney General Eric Schneiderman (D) said as many as 2 million comments regarding net neutrality filed to the commission were falsified."

Defending his vote, Pai said "Broadband providers will have more incentive to build networks, especially to underserved areas.” No they won't, you human-shaped pile of Verizon receipts. We know this because in 1995, the government paid Big Telecom to add digital infrastructure ... and they didn't. As telecom analyst Bruce Kushnick wrote in 2014, "By the end of 2014, America will have been charged about $400 billion by the local phone incumbents, Verizon, AT&T and CenturyLink, for a fiber optic future that never showed up."

But really, what did the public matter? Big Telecom had the power, and they used it. No wonder Chairman Pai smiles like a podiatrist hiding human limbs in the trunk of his Volvo. Telecom revenue is projected to be a $2.4 trillion business in 2019. It's nice to have rich friends who owe you a favor.

No wonder people hate Pai's Auction. No wonder the entire internet rose up hissing like a thousand-foot cobra. No surprise that tech gurus went public with their devastating deconstructions of Pai's made-up tech facts.

Fiction changes. The truth doesn't. Ask yourself the following questions:

Does the internet belong to Big Telecom? No. It belongs to the public.

Did the public want to sell the internet? No, they did not.

Were the people who sold the internet disinterested parties? No, they weren't.

Does selling the internet to elite parasites encourage innovation? It does not. It limits it.

Does Pai's Auction let the states devise their own net neutrality policies? No. It forces the states to follow Washington.

Does selling the Net encourage entry? It does not.

Does selling the Net give freedom to the people? No, it clamps down on their freedom.

Will the Telecoms build new lines? We have proof they won't.

Will they abuse that power? They have before.

Most importantly, who profits? I think we know the answer.

Net neutrality must return. In Pai's Auction, there's only one relationship that counts, and it's the same one that obtains between a hired servant and a wealthy master: dinner is served, sir.