2017 was a terrible year, and Aaron Sorkin didn't make it better; neither did Bruce Willis or Guy Ritchie 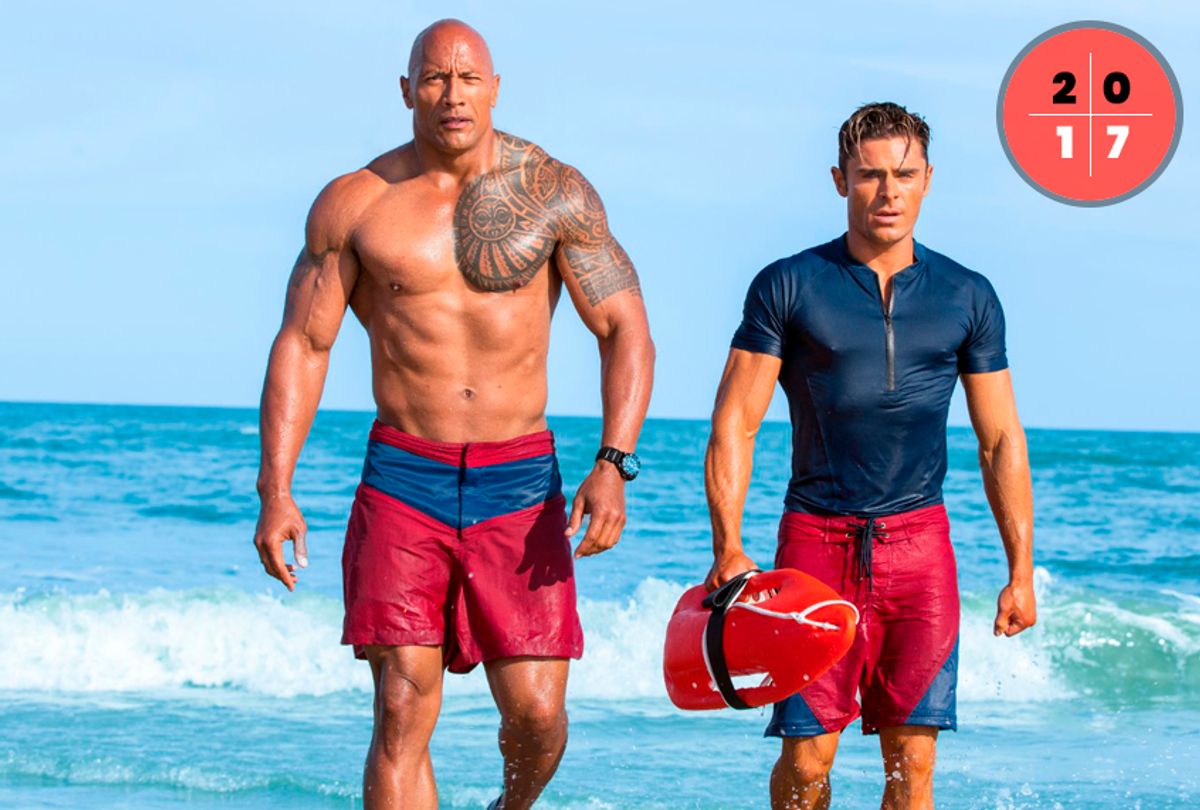 2017 sucked! And so too did some of the movies this year. “CHiPs,” “Ghost in the Shell,” “The Shack,” “Kidnap,” “Woodshock,” “Flatliners,” “The Snowman,” “Suburbicon,” “Geostorm” and “Just Getting Started” all generated reviews only masochists would read.

Now, I really love a “good bad” film. “The Ottoman Lieutenant” was one overripe piece of cheese that was kind of enjoyable if seen in the right frame of mind. And it was not nearly as bad (or as good bad) as “Fifty Shades Darker,” the risible sequel to the risible “Fifty Shades of Grey.”

But “Shades” was a commercial success — $115 million box office — and it wasn’t looking to be great cinema. Kind of in the same way E. L. James’ books aren’t looking to be great literature. It rose to the very modest levels of its low-cut ambitions, and possibly satisfied some members of its core audience. Yes, it was critically panned, but it was also critic-proof.

Hell, even “The Emoji Movie” made almost a million dollars for every bad review it received this year — Rotten Tomatoes shows 98 bad reviews; Box office gross: an astonishing $86 million. There’s just no accounting for taste.

How crazy was this year? Adam Sandler got so much ink and so many great notices for his role in “The Meyerowitz Stories (New and Selected),” that folks may have forgotten he also delivered the critically panned “Sandy Wexler" months earlier.

The films that I saw that were truly bad this year were ones that aimed high or low and failed big. Here in descending order are 10 of the worst films I saw in 2017.

10. “Molly’s Game” Exactly six minutes into Aaron Sorkin’s directorial debut, I thought “game over.” This overlong, underwhelming adaptation of Molly Bloom’s (Jessica Chastain) book — about her experiences running a high-stakes poker game — was slick and manipulative and so impressed with its smug self that I really didn’t think I could make it another 134 minutes. I lasted, but not without getting whiplash from the “Isn’t it clever?” dialogue and Sorkin’s insistence on jumping back and forth between Molly’s childhood and her poker games and her consultations with her lawyer (Idris Elba, underused). As she did in last year’s equally wretched “Miss Sloane,” Chastain can’t put lipstick on this pig. She gave another lame performance because her multi-dimensional character has no depth, just cleavage.

9. “A Ghost Story” In writer/director David Lowry’s capital-P Pretentious indie, C (Casey Affleck) wears a sheet for most of the film. One of the most compelling thoughts I had watching this was, “Are the eyes cut out of the sheet, or are they black ovals?” When C was not on screen, I considered the five-minute, single-take scene of M (Rooney Mara) devouring an entire pie. As the fork clinked against her teeth, my teeth were set on edge. And it was hard not to wonder, “Did she have to shoot that scene more than once?” And "do I care?" “A Ghost Story” was a meditation about time and memory and a house. It ran 92 minutes but watching it felt like 92 days.

8. “Mark Felt: The Man Who Brought Down the White House” Maybe director Peter Landesman thought it would be a good idea in this age of Trump to remind angry liberals about the important role “Deep Throat” played in taking down Nixon 45 years ago. But if this were the case, why didn’t he make a better — or at least an interesting — film? This well-intentioned snooze has the money shot of Felt (Liam Neeson) talking with Woodward (Julian Morris) in a parking lot (Bernstein isn’t even in the cast), but it really doesn’t have much else going for it. Most of the film consisted of lots of criminally boring exposition about Felt’s reasons for his drastic actions. Then I remembered Landesman made the terrible “Parkland” a few years back, about JFK’s experience in the Parkland Hospital on Nov. 22, 1963. I resolved never to see another presidential drama he directs.

7. “Once Upon a Time in Venice” Bruce Willis once had talent and charisma, but now he’s just slumming. Case in point: this creaky vehicle, which has Willis playing a detective in California whose pet dog is stolen. There’s an early scene where Willis, brandishing a gun and sans clothes, skateboards through the city at night. Ha! A cop stops him, so he hides his gun in his ass! Ha! Ha! There’s also an unfunny running gag about a character named — I’m not kidding — “Lew the Jew” (Adam Goldberg), who is being harassed by an obscene graffiti artist. There is more, and it’s not much better. “Once Upon a Time in Venice” was written and directed by Mark and Robb Cullen. They should be graduating into middle school soon.

6. “Hangman” Now, I didn’t see “Snowman,” which got a pretty bad reputation this year, but I did see “Hangman,” which can’t be any better. This ludicrous thriller has a serial killer literally playing the game “Hangman” with the police. He strings up his victims in nooses and carves letters on their chests until he spells a word that reveals why he murders. Detective Archer (Al Pacino) comes out of retirement to help solve the case with Detective Ruiney (Karl Urban). Pacino takes the thin material far too seriously. He speechifies about “chasing ghosts” and lectures about “sense and logic” in scenes that are meant to inspire, but they come across as laughable. “Hangman” also includes a ridiculous action set piece that has the cops trying to rescue a victim hung over the train tracks — while a train is approaching! It’s hardly tense or exciting; in fact, it is depressing. The actors flail as they struggle not just with trying to cut down the body before the train crashes into their car (Spoiler alert: it does) but also with trying to make this terrible film watchable. (Spoiler alert: they don’t).

5. “King Arthur: Legend of the Sword” Guy Ritchie tries to reboot the Arthurian legend — and his career, after bottoming out with “The Man from U.N.C.L.E” — by applying his patented, headache-inducing cinematic style from “Sherlock Holmes” to the Middle Ages. It doesn’t work. The film is noisy, muddled and unpleasant, with souped-up CGI special effects and slow-motion action scenes that were possibly edited in a Cuisinart. Charlie Hunnam actually lacks charisma as King Arthur. This “epic” was an epic fail and a jaw-dropping spectacle, just not in the way Ritchie intended.

4. “The Assignment” Walter Hill, who once made decent action films like “48 Hours” and “The Warriors,” turned in this dud this year. A hit man named Frank (Michelle Rodriguez), wakes up female after he is double-crossed by Dr. Jane (Sigourney Weaver), a surgeon. It’s a repellent premise, told in a repellent style. The film’s action scenes are poorly staged and the “female” Frank’s romance with a nurse named Johnnie (Caitlin Gerard) is questionable. But these elements are hardly the most head-scratching moments in this WTF film. Dr. Jane, who is mostly confined to a straitjacket (or in male garb), tries to justify her actions and debate gender issues. Alas, Weaver is constrained not only by the straitjacket but by the lame script. Rodriguez kicks ass, when not examining her new/nude body. But she should have taken Hill out to the woodshed and taught him a sensitivity lesson. “The Assignment” is utterly reprehensible. It’s not even camp. It’s just crap.

3. “Baywatch” No one was expecting “Baywatch” to be good, but it was beyond bad; worse than imaginable. The jiggle that made the TV series watchable was gone. Instead, there were just a series of lame dick jokes, and tame gross-out humor that was supposed to make the dude bros (Dwayne Johnson and Zac Efron) feel more macho. Instead, they should feel embarrassed. As should anyone who sat through this film, myself included. “Baywatch” really didn’t have to do much to be dumb fun. Put some good-looking guys and girl in swimsuits and have them stop silly crime. It couldn’t even manage that.

2. “The Last Face” Sean Penn’s stinkeroo was a brutally painful experience that wasted the considerable talents of Javier Bardem as a doctor and Charlize Theron as the director of an international relief agency. It also tested the patience and goodwill of viewers. Penn’s film was craptacular on every level. The romance was ridiculous. The action scenes were too gratuitous. And the serious crises in Africa were treated with either tone-deafness or callousness. “The Last Face” cries out for help. It was simply a crying shame.

1. “Tulip Fever” No one keeps a film on the shelf because it’s so good. “Tulip Fever” had its release date moved around for about two years before it was finally dumped in theaters over Labor Day. It was also re-edited so many times that the end result was far removed from the original project. Director Justin Chadwick’s film, written by Tom Stoppard(!) and Deborah Moggach, based on her novel, was set in 17th-century Amsterdam, during the tulip mania. It was manic all right. This hot mess of a film had Alicia Vikander as an unhappily married woman who has an affair with an artist (Dane DeHaan). The actors, although in their 20s, looked prepubescent, giving the film an uneasy whiff of child porn. Not that the sex scenes were all that sexy. They were only there to develop a strained subplot involving a fake pregnancy, which begat an absolutely painful performance by the usually reliable Tom Hollander as a doctor who is on hand for a strained child-birthing scene. There is also a strained race-against-time sequence involving a drunk Zack Galifianakis that builds no suspense. There are some tulip bulbs, but mostly there is badness. Judi Dench and Christoph Waltz are wasted in supporting roles. “Tulip Fever” was, no surprise, distributed by Harvey Weinstein. It only adds to his crimes this year.