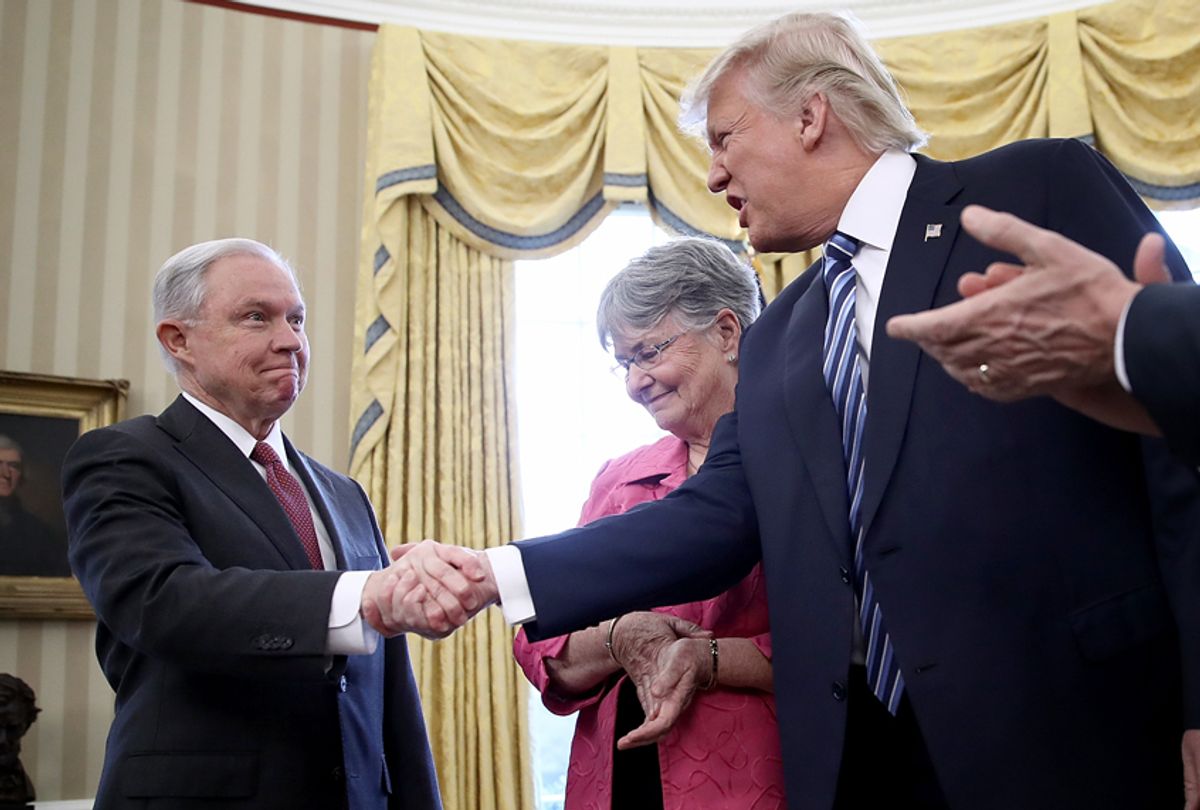 The Trump administration experienced perhaps its roughest stretch during July 2017, when Trump and company stared down legislative and judicial  defeats, major staff shake-ups and the lingering investigation into Russian collusion.

From the hiring (and firing) of former White House communications director Anthony Scaramucci, the departure of former White House Chief of Staff Reince Priebus, the home of President Donald Trump's former campaign manager Paul Manafort being raided by the FBI, or the devastating health care defeat delivered by Sen. John McCain, R-Ariz., the Trump White house looked as bleak as ever.

On July 26, one week prior to the FBI raid of Manafort's house, Trump was seething with anger over the Russia investigation and how it dominated headlines, the Associated Press reported. Trump ripped into Attorney General Jeff Sessions for recusing himself from the ongoing Russia probe.

Though Sessions was one of the first mainstream Republicans to back Trump's presidential bid, the relationship between the two reportedly strained around July. Incredibly, Trump went so far as to blame Sessions "in part" for the Alabama Senate special election loss Republicans suffered in early December, the AP reported — even though the senate vacancy was a direct result of Trump appointing then-Senator Jeff Sessions to Attorney General.

The AP reported, with no hint of irony:

... the rift between Trump and Sessions still has not healed. Recently, Trump bemoaned the Republicans’ loss in a special election in Alabama and in part blamed Sessions, whose departure from the Senate to head to Justice necessitated the election.

Several other incidents in July contributed to a massive White House shake-up and led to the ushering in of current Chief of Staff John Kelly, who has attempted to control and tamp down the flow of information to the White House.

Before Kelly began, Trump complained about then–White House press secretary Sean Spicer, and said he wasn't doing a good job of defending him and did not "look the part," the AP reported. So Trump brought in Anthony Scaramucci, "a rich, fast-talking New York hedge fund manager who excelled on television." Reportedly, the president saw a mirror of himself in Scaramucci. Spicer quit hours after the White House hired Scaramucci.

Following Scaramucci's expletive-filled interview with the New Yorker, Trump had enough. He "was unwilling to share the spotlight with an aide, and came to believe Scaramucci had forgotten his place," the AP reported.

Trump also struggled to adhere the advice of Defense Secretary James Mattis and Secretary of State Rex Tillerson, following a July 20 meeting in a room in the Pentagon known as "The Tank," the AP reported. Trump resisted a surge of troops in Afghanistan, but eventually caved. The meeting, if anything, "also revealed the tensions within the administration between those from Washington’s national security establishment and those eager to pull back from international entanglements."

The defeat of GOP health care efforts helped make July a devastating month for the Trump presidency. But the loss allowed the GOP and the White House to craft a strategy that eventually mustered up enough votes — albeit with 12 days to spare before the end of the year — to deliver Trump his first major legislative achievement.

With almost a full year in the books, the Trump presidency mostly stumbled and been bogged down by numerous scandals or incendiary unilateral decisions. The year will soon end, but more is sure to follow.