"Hip-hop is the only place for young male anger at the moment," the U2 frontman complained, "and that's not good" 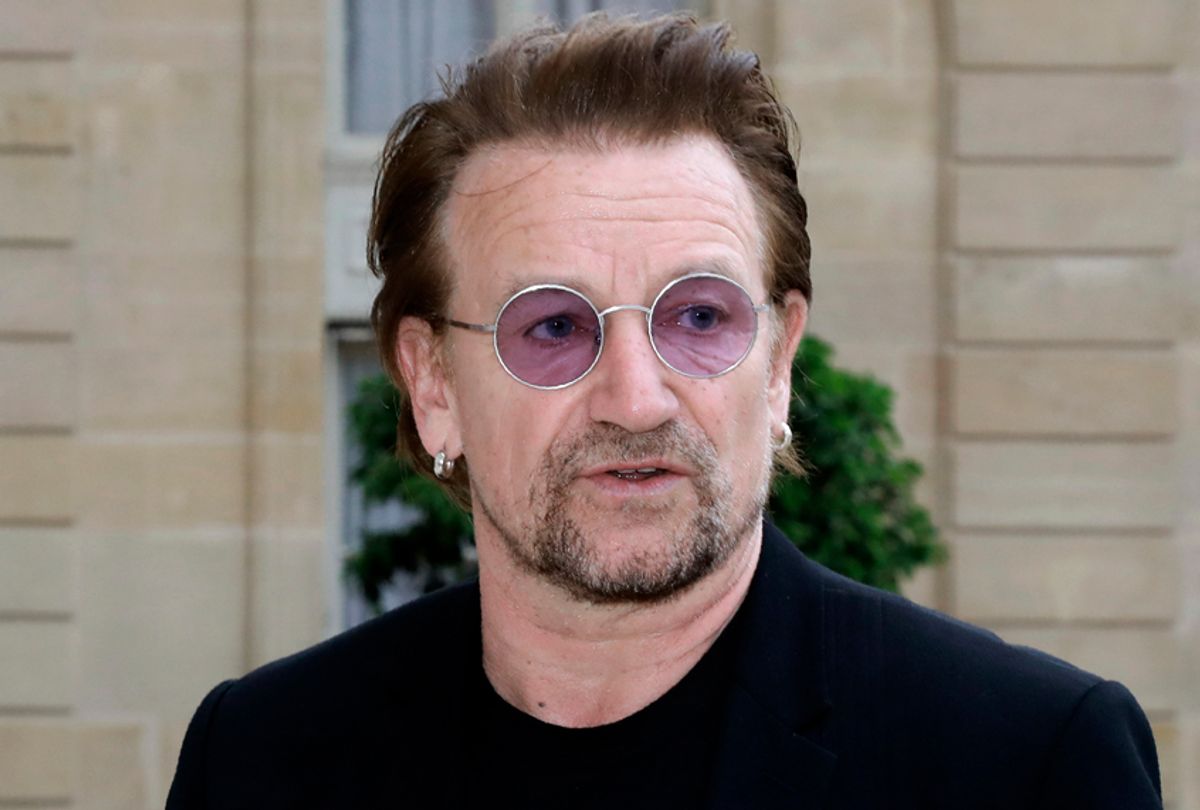 In an interview published in Rolling Stone Wednesday, iconic U2 frontman Bono expressed disappointment that contemporary music has become, in his words, "very girly." He also stated that contemporary rock 'n' roll was insufficiently "angry."

Speaking to Rolling Stone co-founder, publisher and recent target of sexual-misconduct allegations Jann S. Wenner, Bono, 57, spoke about the musical tastes of his son, Elijah Hewson, 18. "Elijah is in a band, and he has got very strong feelings about music, but he doesn't make any distinction between, let's say, the Who and the Killers. Or, you know, Nirvana and Royal Blood. It is not generational for him," said the singer. "It is the sound and what he is experiencing. He believes that a rock & roll revolution is around the corner."

This spurred Wenner to ask Bono if he agreed with his son. The singer opined, "I think music has gotten very girly," adding that "there are some good things about that." He continued, "hip-hop is the only place for young male anger at the moment – and that's not good."

Casting doubt on the manliness of music — and, indeed, using the very word "girly" — stands in contrast to Bono's comments earlier in the piece, where his support for feminist ideals seems far less equivocal.

"Women are stepping to the forefront," he said of his work with his ONE Campaign. "Our lead campaign at the moment is called Poverty Is Sexist. And there is another one called Girls Count. About 130 million girls can't go to school who want to go to school."

He added that he was satisfied with women taking the lead in these efforts. "I am working more in the background," he said, "and that is OK."

Bono's comments also run against the actual numbers. While women have earned better placement in sales charts and critical appraisal in recent years, men of very traditionally masculine character still dominate the music industry. On Billboard's chart of the Top Artists of 2017, 18 of the first 20 spots are held by men, with the first woman, Ariana Grande, appearing at number 15.

Admittedly, it is hard to parse exactly what Bono meant by "girly," though it does appear generally, sloppily misogynistic and potentially homophobic in the same clumsy and likely accidental sense. Looking at the Billboard chart of top 2017 artists, it is unclear which artists — The Weeknd, Ed Sheeran, Lil Uzi Vert, Coldplay, Guns N' Roses — should be considered "girly." The only other woman on that list, Rihanna, certainly doesn't fit the current connotations of the word.

It is certainly true that rock — hard rock — has lost much of its market share. While metal, hardcore, screamo and other "angry" genres still produce interesting acts and albums, collecting die-hard fans in the process, they aren't represented in sales charts in the same way they were when U2's "Achtung Baby" premiered in 1991.

They still thrive, however, and even if they did not — as Bono seems to contend — it is unclear how that or the dominance of hip-hop as a mode of angry expression for men would be "not good" as opposed to simply a neutral-value change in priorities or tastes. Certainly, it's harder to see what the prominently men who play rock should be rightly, justifiably angry about in 2017 than it was in the heyday of U2 and Pearl Jam. For those willing to see it, there is also a casual, likely fully unintended, racial interpretation of Bono's comments available.

Bono continued, speaking of rock as an avenue for the expression of manly anger. "When I was 16," he said, "I had a lot of anger in me. You need to find a place for it and for guitars, whether it is with a drum machine – I don't care. The moment something becomes preserved, it is fucking over. You might as well put it in formaldehyde."

He continued, "In the end, what is rock & roll? Rage is at the heart of it. Some great rock & roll tends to have that, which is why the Who were such a great band. Or Pearl Jam. Eddie [Vedder] has that rage."

When asked if the angry, revolutionary, man-led, man-directed rock of yesteryear would have a place in the pop-culture landscape of the future, Bono said, "It will return."