Hint: The president loves Virginia because he loves golf 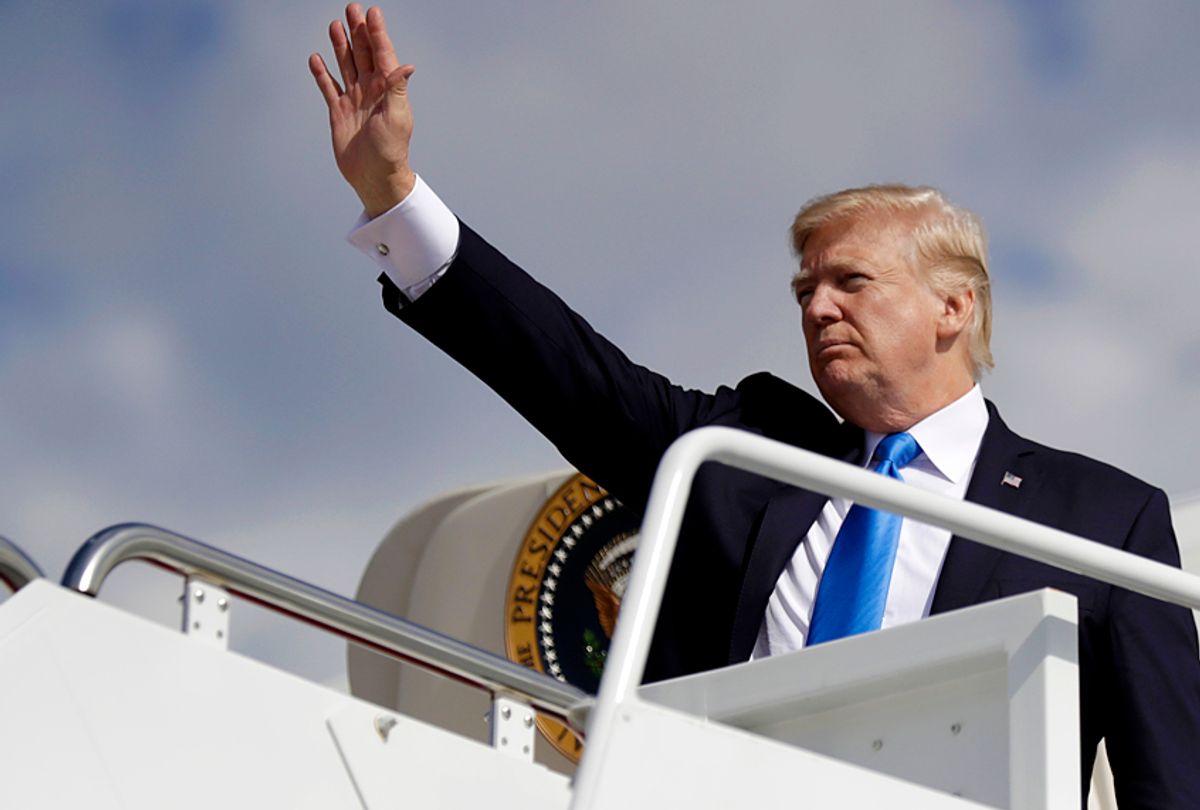 Donald Trump prepares to board Air Force One (AP/Evan Vucci)
--

They say you can’t judge a book by its cover. But can you judge a president by the places he visited?

Since taking office, President Trump has made at least a pit stop in 29 of the 50 states, plus Puerto Rico. A quick perusal of Trump’s visited-state list reveals some interesting priorities, and also hints at how Trump’s mind works. And the omissions speak volumes. (After all, how do you govern the parts of the country that you have no connection to?)

For instance, while Trump spent time in most of the largest states by population, including Texas, New York, New Jersey, Florida and Ohio, in 2017 he neglected to visit the most populous state in the union: California.

Moreover, he has yet to set foot in any of the Pacific Coast states. Washington, Oregon, Alaska and the entire state of California are just big question marks for the Donald, though he did visit Hawaii on a stopover during his trip to Asia earlier this year.

Despite avoiding the state, California was on Trump’s mind in 2017. He tweeted about the ongoing California wildfires twice, and he howled over the “miscarriage of justice in San Francisco” after the Kate Steinle murder trial.

Trump’s predilection for taking trips to golf at his own clubs has not gone unnoticed. The New York Times created a tracking tool that monitors the president’s trips to his own properties. Several entrepreneurial developers have created their own websites — TrumpGolfCount.com and GolfWithDonald.com among them — that attempt to track the number of trips and the cost to taxpayers, although the sites have wildly different estimates for both numbers.

Yet in order to claim Trump is a hypocrite for vacationing often and avoiding states whose politics or policies he disliked, you’d have to compare him with predecessors. For instance, Barack Obama visited only 22 states in 2009, his first year as president. Yes, he did visit Alaska and California, and seemed unafraid of visiting traditionally red states like Texas, Louisiana and Indiana, all of which he visited in 2009 as well.

But Obama was also relatively golf-obsessed. Though he never owned any golf courses, Obama often hit the links at military bases. In 2009, Obama went golfing 27 times, according to US News and World Report. All but three of those trips were at military bases’ golf links.

In contrast, the New York Times counts 86 golf outings for President Trump in 2017, year one of his presidency. All in all, Trump spent about one-third of his first year, or 111 days, visiting and/or golfing at a “Trump property” — which includes places like Mar-a-Lago, the swanky resort he owns in Florida.

While Trump golfed about three times as much as Obama in year one of their respective presidencies, both of them outpace President George W. Bush. While Bush was notorious for spending much of his presidency on vacation — a subject that filmmaker Michael Moore famously mocked him for in “Fahrenheit 9/11”— Bush was not that into golf. Politifact reports that Bush only went golfing 24 times throughout all eight years of his presidency.